He saved the choicest of words for Judi Dench. If you want to catch a repeat telecast of 2020 Golden Globes, it's Monday at 9pm in India. 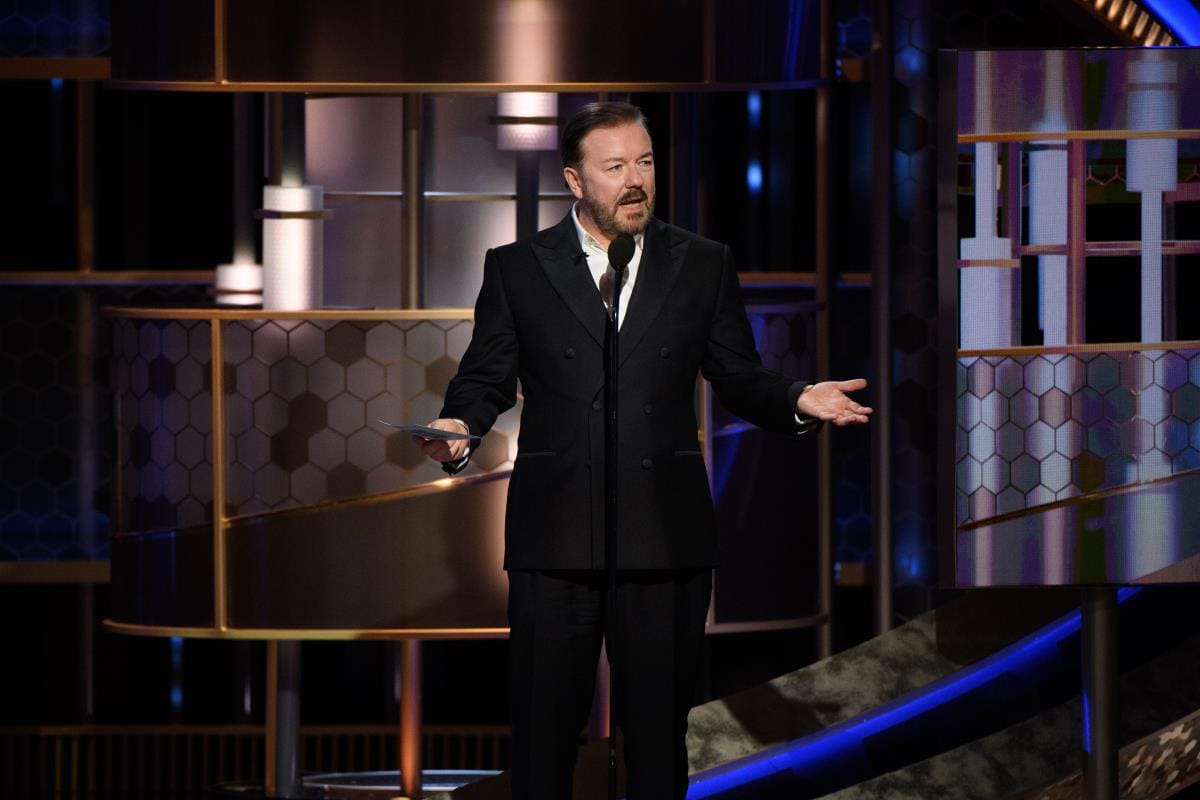 Ricky Gervais at the 2020 Golden Globes

In his opening monologue at the 2020 Golden Globes, host Ricky Gervais took aim, attacked, and skewered everyone associated with Hollywood, be it stars such as Leonardo DiCaprio, Martin Scorsese, and Judi Dench, or the giants that are funding the entertainment industry, including the likes of Apple, Amazon, and Netflix. What made things a little more outrageous, was that Apple CEO Tim Cook was also present at the 2020 Golden Globes. At the same time, Gervais used the opportunity to promote his own Netflix series, the black comedy-drama After Life, while poking fun at how boring the Golden Globes are perceived to be. Funnily enough, Gervais himself was cited as one of the disappointing elements by entertainment critics in their rounds-ups of the 2020 Golden Globes.

Here's Gervais calling out Apple at the 2020 Golden Globes:

“Apple roared into the TV game with The Morning Show, a superb drama about the importance of dignity and doing the right thing, made by a company that runs sweatshops in China. Well, you say you're woke but the companies you work for in China — unbelievable. Apple, Amazon, Disney. If ISIS started a streaming service, you'd call your agent, wouldn't you?”

And here's Gervais on Netflix, while promoting his own Netflix show:

“No one cares about movies any more. No one goes to cinema, no one really watches network TV. Everyone is watching Netflix. This show should just be me coming out, going, ‘Well done Netflix. You win everything. Good night.' But no, we got to drag it out for three hours. You could binge-watch the entire first season of After Life instead of watching this show. That's a show about a man who wants to kill himself ‘cause his wife dies of cancer and it's still more fun than this. Spoiler alert, season two is on the way so in the end he obviously didn't kill himself.”

Netflix was the leader with 34 nominations at the 2020 Golden Globes, but in the end, it won only two awards.

At the 2020 Golden Globes, Gervais also touched upon Netflix's The Irishman, and The Two Popes, though the latter joke is aimed more at the Catholic Church. He worked in the #MeToo moment as a segue; reporter Ronan Farrow helped uncover sexual abuse allegations against Harvey Weinstein.

“Lots of big celebrities here tonight. Legends. Icons. This table alone — Al Pacino, Robert DeNiro … Baby Yoda. Oh, that's Joe Pesci, sorry. I love you man. Don't have me whacked. But tonight isn't just about the people in front of the camera. In this room are some of the most important TV and film executives in the world. People from every background. They all have one thing in common: They're all terrified of Ronan Farrow. He's coming for ya. Talking of all you perverts, it was a big year for paedophile movies. Surviving R. Kelly, Leaving Neverland, Two Popes. Shut up. Shut up. I don't care. I don't care.”

As for Scorsese, DiCaprio, and Dench, here's what Gervais had to say at the 2020 Golden Globes:

“Martin Scorsese made the news for his controversial comments about the Marvel franchise. He said they're not real cinema and they remind him about theme parks. I agree. Although I don't know what he's doing hanging around theme parks. He's not big enough to go on the rides. He's tiny. The Irishman was amazing. It was amazing. It was great. Long, but amazing. It wasn't the only epic movie. Once Upon a Time in Hollywood, nearly three hours long. Leonardo DiCaprio attended the premiere and by the end his date was too old for him.”

“The world got to see James Corden as a fat pussy. He was also in the movie Cats. No one saw that movie. And the reviews, shocking. I saw one that said, ‘This is the worst thing to happen to cats since dogs.' But Dame Judi Dench defended the film saying it was the role she was born to play because she — I can't do this next one. [laughs] Because she loves nothing better than plunking herself down on the carpet, lifting her leg, and licking her own (expletive). [coughs] Hairball. She's old-school.”

You can catch a repeat telecast of the 2020 Golden Globes at Monday 9pm IST in India on Comedy Central, Colors Infinity, and Vh1 India.