And that Scarlett Johansson is more than a spy. She’s an Avenger. 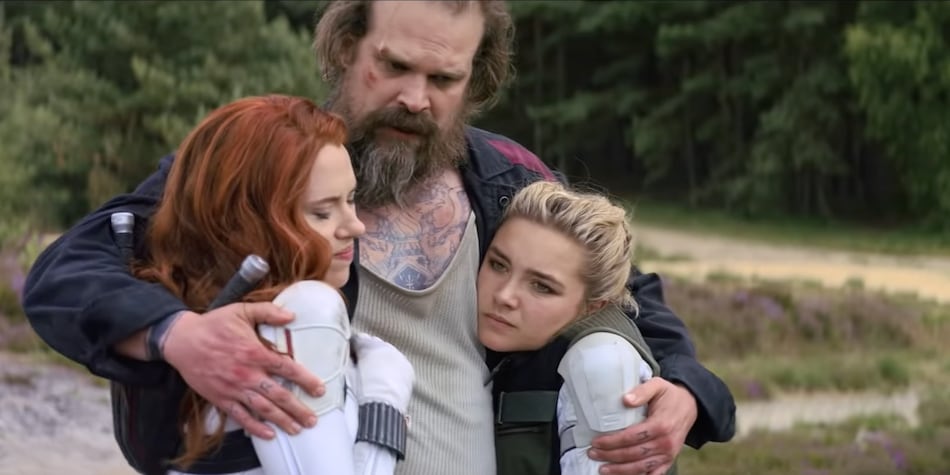 Black Widow is out in a little over two weeks in cinemas and on Disney+ with Premier Access in select markets, and Marvel Studios has unveiled a new 30-second teaser trailer to promote the Scarlett Johansson-led superhero movie. It gives us a peek into the dynamic between Natasha Romanoff (Johansson) and her father-figure Alexei Shostakov (David Harbour), formerly the Red Guardian, Russia's counterpart to Captain America. We even see Alexei put on his Red Guardian suit later in the Black Widow trailer, with fellow Red Room-trained Melina Vostokoff (Rachel Weisz) whistling at him.

“Natasha, you're not just a spy. You're an Avenger,” Alexei says at the start of the new Black Widow trailer, really emphasising the last word. In a continuation of that scene, Alexei tells Natasha and her sister-figure Yelena Belova (Florence Pugh) that he “couldn't be more proud” of them. But Natasha pushes him away, before Yelena adds: “You smell really bad”. The Black Widow trailer then cuts to a different shot with Yelena wondering what brings Natasha home. As she replies (“We have unfinished business”), we see her go up against the villain Taskmaster, whose actor has still not been revealed.

Black Widow is out July 7 in the UK and Ireland, July 8 in Australia and UAE, and July 9 in the US and Singapore. The Marvel movie is technically slated to open July 9 in India too — in English, Hindi, Tamil, Telugu, Kannada, and Malayalam — but that's highly unlikely given most cinemas are still closed here following a second (quasi) nationwide lockdown in response to COVID-19. It is expected October 8 on Disney+ Hotstar.

Uttarakhand Disaster Caused Due to Rock and Ice Avalanche as per Satellite Data: ESA