“We all have to choose between what the world wants you to be and who you are.”

The final trailer for Black Widow is here. With less than two months to release, Marvel has given us another two-minute look at Scarlett Johansson's first solo adventure as the titular spy a.k.a Natasha Romanoff, which finds her going back to “where it all started” — home. The new Black Widow trailer sheds more light on the film's plot, which involves the villain Taskmaster — still undefined, but confirmed by name — who controls the Red Room, where all Black Widows are trained, as was Natasha. The trailer also gives a peek at the mix of action and humour that drives all Marvel movies.

Black Widow's final trailer opens her sister-figure Yelena Belova (Florence Pugh) and Natasha (Johansson) getting drunk over mundane made-up stories the former told of the latter. Natasha then says that she “made mistakes and a lot of enemies […] before she “was an Avenger”. Cut to new footage of the Taskmaster in action, who confronts Natasha on a bridge. Taskmaster has set the Red Room trainees on them, whom Yelena describes as “fully conscious but no choices.”

“We have to go back where it all started, so that they never do that to anyone again,” Natasha vows soon after. Thankfully, she has the support of her family of sorts, which involves the father-figure Alexei Shostakov (David Harbour) — a.k.a the Red Guardian, the Russian counterpart to Captain America — and Melina Vostokoff (Rachel Weisz), who says she's “always found it best not to look into the past.” The rest of the final Black Widow trailer is largely made up of action sequences.

In addition to Johansson, Pugh, Harbour, and Weisz, Black Widow also stars O-T Fagbenle (The Handmaid's Tale) as Rick Mason, a S.H.I.E.L.D. ally from Romanoff's past and her love interest, William Hurt returning as US Secretary of State Thaddeus Ross, and Ray Winstone (The Departed) and bodybuilder Olivier Richters in undisclosed roles. Robert Downey Jr. will also reprise his role as Tony Stark / Iron Man in an unknown capacity. That's because the Marvel movie is set after the events of Captain America: Civil War and prior to Avengers: Endgame. Behind the scenes, Cate Shortland (Lore) is directing Black Widow, off a script by Jac Schaeffer and Ned Benson.

Black Widow is one of six Marvel movies in Phase Four of the Marvel Cinematic Universe, alongside The Eternals in November 2020, Shang-Chi and the Legend of the Ten Rings in February 2021, Doctor Strange in the Multiverse of Madness in May 2021, a sequel to Spider-Man: Far From Home in July 2021, and Thor: Love and Thunder in November 2021. Additionally, we'll get four Disney+ series set in the MCU alongside, The Falcon and the Winter Soldier in August 2020, WandaVision in December 2020, Loki in spring 2021, and Hawkeye in autumn 2021.

In India, Black Widow is out April 30 in English, Hindi, Tamil, Telugu, Malayalam, and Kannada. It's out May 1 elsewhere. 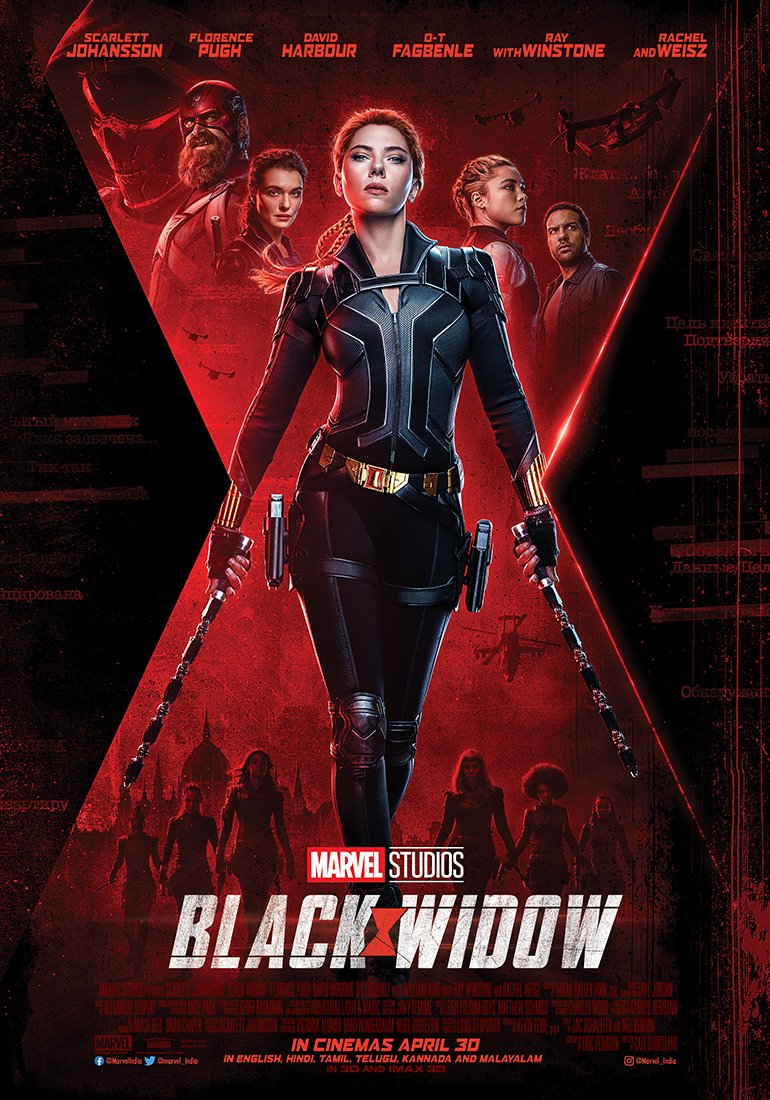