We only have one question: when will the Fallen series fall?

Gerard Butler in Angel Has Fallen

Gerard Butler's Secret Service agent Mike Banning is back to save the day, (largely) on his own. Again. Angel Has Fallen — the third entry in the Fallen film series — is out now in cinemas across India. This time around, Mike will have to first clear his own name after he's framed for an assassination attempt on the US President (Morgan Freeman, upgraded from Vice President) before he can take on the real terrorist threat that puts the President's life at risk. Of course, the President's life is at risk. What film series did you think you were watching? If the President is not in harm's way, how would they justify making a movie where a Secret Service agent is the hero?

Tickets were made available for Angel Has Fallen earlier this week in India. The film is only available in English with plain ol' 2D, so if you were hoping to watch it in Hindi / catch it in IMAX, you're out of luck. Angel Has Fallen is rated “U/A” in India — that means children under the age of 12 can watch it with parental guidance — which is slightly surprising considering it's rated “R” in the US. (Films with R-rating are usually handed “A” certification by the CBFC in India.) There's a mid-credits scene in Angel Has Fallen that's worth a watch according to critics, so stay in your seat after the film ends if you want to catch that.

Unfortunately, critics aren't happy with Angel Has Fallen on the whole, which is in line with reviews for previous entries — 2013's Olympus Has Fallen, and 2016's London Has Fallen — for what it's worth. Angel Has Fallen has a rotten 48 percent rating and a mixed 45 score on reviews aggregators Rotten Tomatoes and Metacritic, respectively.

In addition to Butler and Freeman, the returning cast of Angel Has Fallen also includes Jada Pinkett Smith as FBI Agent Helen Thompson, Tim Blake Nelson as Vice President Kirby, and Piper Perabo as Mike's wife Leah Banning. Newcomers to the Angel Has Fallen cast include Lance Reddick as Secret Service Director David Gentry, Nick Nolte as Mike's father Clay Banning, and Danny Huston as Wade Jennings, taking over the role from Holt McCallany, who had to drop out owing to scheduling conflicts with Mindhunter.

Angel Has Fallen has been directed by Ric Roman Waugh (Shot Caller), off a script by Robert Mark Kamen (Transporter, Taken), Matt Cook, and Waugh. Butler is also a producer on Angel Has Fallen through his banner G-BASE alongside co-founder Alan Siegel, and Matt O'Toole, John Thompson, Les Weldon, and Yariv Lerner. Lionsgate is the worldwide distributor, with PVR Pictures handling distribution in India. The runtime of Angel Has Fallen is 121 minutes, by the way. 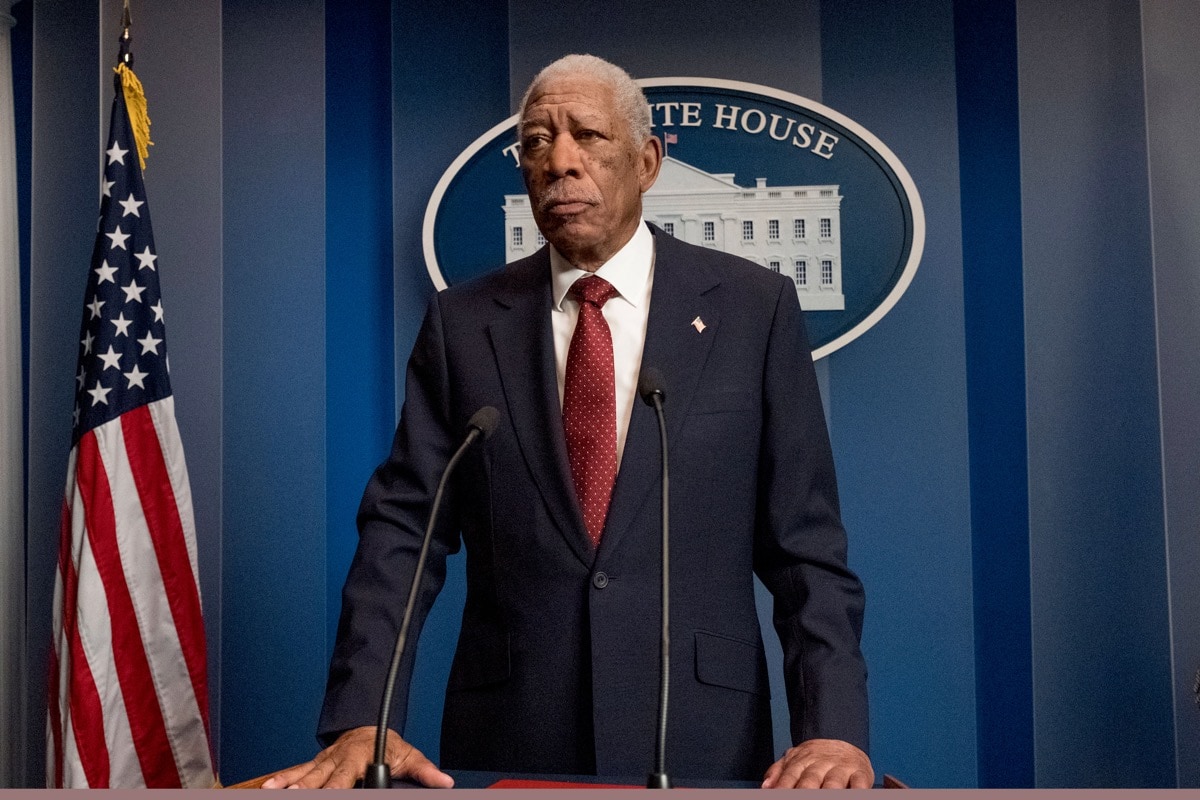 Here's the official synopsis for Angel Has Fallen, via Lionsgate:

“When there is an assassination attempt on US President Allan Trumbull (Morgan Freeman), his trusted confidant, Secret Service Agent Mike Banning (Gerard Butler), is wrongfully accused and taken into custody. After escaping from capture, he becomes a man on the run and must evade his own agency and outsmart the FBI in order to find the real threat to the President. Desperate to uncover the truth, Banning turns to unlikely allies to help clear his name, keep his family from harm and save the country from imminent danger.”

If you're interested in re-watching the earlier entries of the Fallen series, you'll be slightly disappointed to know that Olympus Has Fallen is not available anywhere, while London Has Fallen is on Netflix. Considering the two previous films in the franchise are not available on digital platforms, we can't say for certain if Angel Has Fallen will be released on Google Play or iTunes. As for streaming, Angel Has Fallen will be exclusive to Lionsgate Play, the studio's new streaming service launched earlier this week in partnership with Vodafone Play, where it is expected to appear in less than a year.

Further reading: Angel Has Fallen, Olympus Has Fallen, London Has Fallen, Gerard Butler, Morgan Freeman, Lionsgate
Akhil Arora Email Akhil Akhil Arora covers entertainment for Gadgets 360, interviewing stars such as Christian Bale and Anurag Kashyap, covering series premieres, product and service launches across the globe, and looking at American blockbusters and Indian dramas from a global socio-political and feminist perspective. As a Rotten Tomatoes-certified film critic, Akhil has reviewed over 150 movies and TV shows in over half a decade at Gadgets 360. When he is not completely caught up with new film and TV releases, Akhil ...More
Vivo iQoo Pro With Snapdragon 855 Plus SoC Launched, Will Be Offered in 4G and 5G Variants: Price, Specifications