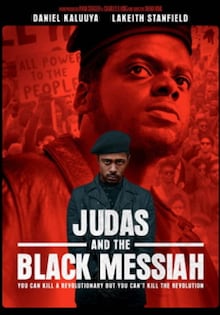 Judas and the Black Messiah

About Judas and the Black Messiah Movie (2021)

A biographical drama, Judas and the Black Messiah is based on the 1969 killing of Chicago Black Panther Party chairman Fred Hampton (Daniel Kaluuya). The film shows how William O'Neal (Lakeith Stanfield) is offered a plea deal by the FBI to infiltrate the Illinois chapter of the Black Panther Party to gather intelligence on Hampton. A career thief, O'Neal instead manipulates both: his comrades and his handler, Special Agent Roy Mitchell (Jesse Plemons). Meanwhile, Hampton is covering new grounds — both politically and in his love life — with fellow revolutionary Deborah Johnson (Dominique Fishback). All this under the direct leadership of FBI Director J. Edgar Hoover (Martin Sheen). Take a look at the Judas and the Black Messiah official trailer below.