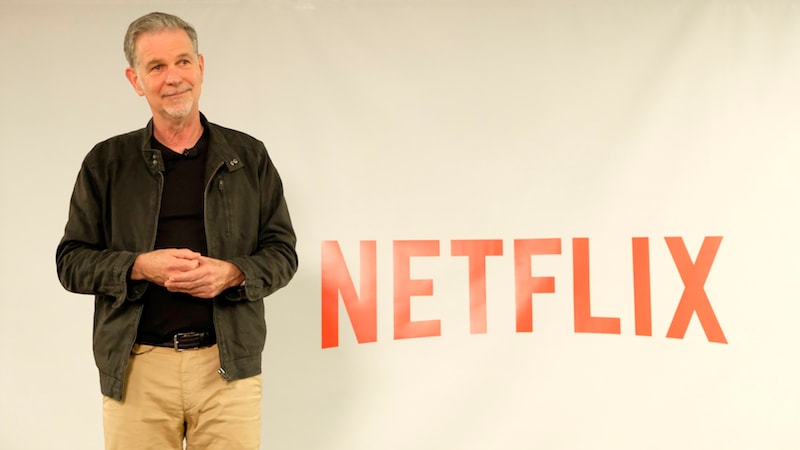 At a recent press event that took place at Netflix's Los Angeles office, CEO Reed Hastings spoke to the press, and inevitably, there were questions about the company's future, given the push into original programming by, among others, the likes of Amazon and Apple, two of the three biggest companies in the world.

"The question is, all the big guys are trying to kill you, how are you going to stay alive?" Hastings paraphrased with a laugh, before going on to say that Netflix's core strategy is to stay focused and produce great content. But does that answer undermine the role that content from companies like Disney - one potential streaming competitor - or others such as Fox, or countless television networks, helped Netflix reach its position as the leading "channel" on the Internet in the US and some other markets?

To a degree, yes. In Netflix's early days, its streaming business was just a tiny portion of the company. "Ten years ago, streaming was a small startup within Netflix," said Greg Peters, Chief Product Officer at Netflix, "one dozen people out of 400 employees." At that time, Netflix only streamed licensed content, but five years ago, it launched the first original - House of Cards. Since then, Netflix spent more and more on content, and this year, is spending "$8 billion on content, increasingly on Originals," added Peters.

But as Netflix was at pains to show, it's not just the money it's spending on originals that makes it relevant. After all, that would make it just another studio, or another channel, and as more and more of those go online, there's a real risk that content gets scattered, until, like TV, you're paying for 500 channels to get what you want to watch. Gadgets 360 got to meet the teams behind many of the innovations that Netflix believes it brings to the table.

One of the big ones is distribution. Although Netflix uses Amazon's AWS cloud for its control layer, it also has a network of servers called Open Connect boxes around the world, to reduce the latency involved in video delivery. A year ago, Netflix also started to optimise compression depending on the needs of each title in its library, using a tool it calls Dynamic Optimiser. Now, the company told Gadgets 360, it's moved from optimising per title, to optimising per frame - for each scene that's being played.

"We updated our encoding algorithms to say - let's optimise the video on a chunk-by-chunk basis, where each chunk was a few minutes long," explained Anne Aaron, Director of Video Algorithms, Netflix. "But the most recent thing we did is what we call the Dynamic Optimiser and Coding Framework. If you look at a video, the most natural way to segment that video is by shots. The camera looking at a few characters with the same background and with the same lighting."

"We analyse the content per shot, and we make encoding decisions based on that shot as well as other shots within the video," she added. The result of this, according to Aaron, was to reduce the bandwidth required significantly. "If in the past we were delivering enjoyable quality at 750kbps, now we can do it at a much lower 270kbps." This means that even a person who's on a relatively slow mobile connection would be able to watch videos in higher quality, and someone with a faster connection wouldn't have to worry so much about data caps.

But being able to sip data might be less of an advantage as costs keep dropping. During the event, Hastings himself said that every country should have its "Reliance Jio moment", when a South African reporter talked about high data costs in that country, pointing to the reduced costs of high-speed wireless data in India ever since the telco entered the market. However, reduced data costs make it easier to consume video content from other platforms too, not just the highly optimised ones.

Though Hasting's response highlighted Netflix's own originals, there's no doubt that major license holders backing away from Netflix will cause the company problems. However, that doesn't necessarily mean that online video is going to fracture just like television, with each platform only housing its own originals.

Technology is going to play a key role, and there are plenty of other innovations at play as well - from A/B testing posters on its home screen, to offering vertical video trailers on mobiles, to creating apps that can be used in production in order to keep its flow of originals coming faster.

Some companies will be able to compete in the same way - Disney definitely has the muscle to do so, while HBO with its focus on prestige television is able to hold its own just fine thanks to shows like Game of Thrones - but not all content owners will be able to take the same approach. For them, the likes of Netflix and Amazon Prime Video will offer a path that delivers their content in a way that the viewers have a great experience.

For many, like say Ronnie Screwvala with Love Per Square Foot, Netflix just makes sense - it brings you a global audience, and promises that your viewers will have a great experience. Which is also good for us viewers - it's a lot better to pay for a few platforms, than to have to pay for dozens - if not hundreds - of channels.

Disclosure: Netflix sponsored the correspondent's travel and stay for the event in Los Angeles.