War for the Planet of the Apes, Final Fantasy XII: The Zodiac Age, and More – The Weekend Chill 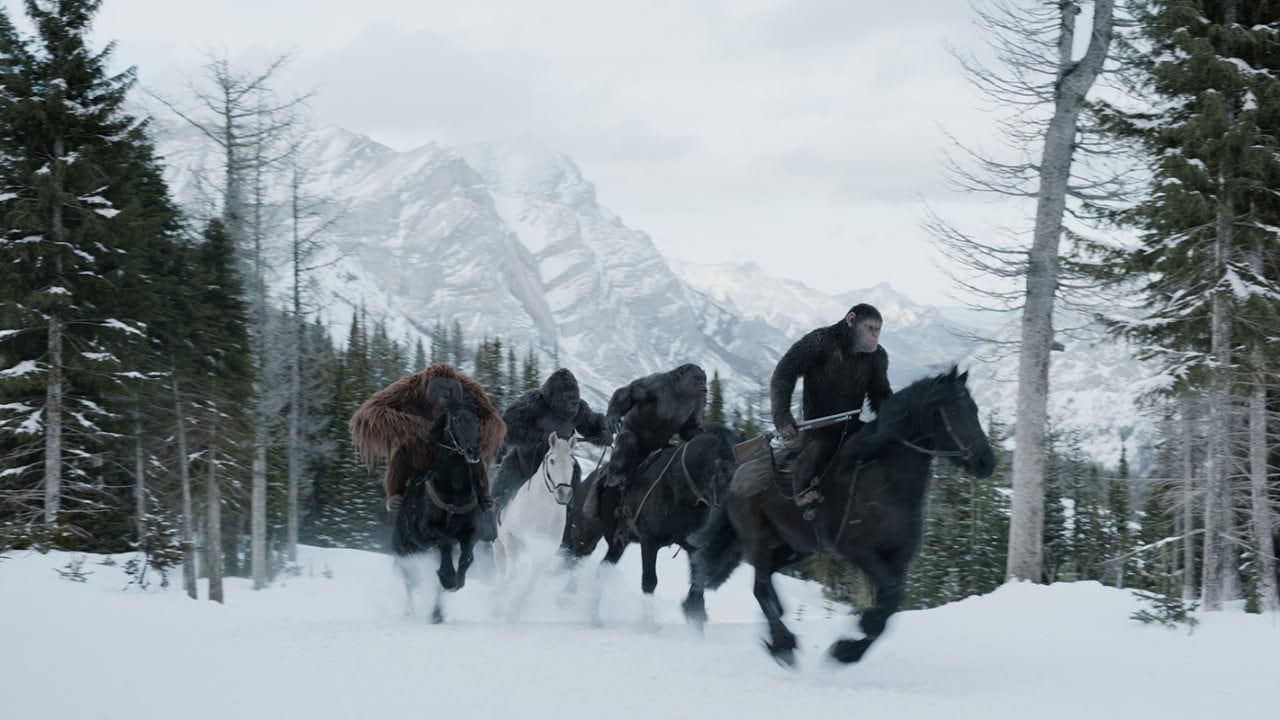 “A Bond movie, definitely. I’ve spoken to the producers Barbara Broccoli and Michael G. Wilson over the years,” The Dark Knight director Christopher Nolan told Playboy in an interview over the weekend. “I deeply love the character, and I’m always excited to see what they do with it. Maybe one day that would work out. You’d have to be needed, if you know what I mean. It has to need reinvention; it has to need you. And they’re getting along very well.”

War for the Planet of the Apes released Friday, but Matt Reeves has already been talking about ideas for future entries. In an interview with Fandango, he said: “The world that’s described in [reboot franchise] is different from the world that we know from the [1968] film, and it becomes an opportunity to explain how we get there, and that becomes an opportunity to hold a mirror up to human nature. And really, when we’re looking at this ape nature, we’re looking at ourselves as reflected in these apes, that’s why we identify with them.”

Reeves is also the director for the next standalone Batman film, and he revealed this week that he’s going to start from scratch on the script. “No, it’s a new story,” Reeves told MTV’s Happy Sad Confused podcast. “It’s just starting again. I’m excited about it. I think it’s going to be really cool.”

Thursday brought us the list of Emmy nominees. Westworld and Saturday Night Live are tied for 22 nominations, Veep became the leader in comedy with 17 nods, while the mini-series Feud: Bette and Joan got 18 nominations. There are five new dramas in the best drama line-up, including The Crown, The Handmaid’s Tale, Stranger Things, This is Us, and Westworld. Black Mirror’s San Junipero made it to the TV movie category.

TV:
Castlevania
Based on Konami’s classic video game franchise, Castlevania is the story of the last surviving member of the disgraced Belmont family – a clan of monster hunters – who’s trying to save Eastern Europe from extinction at the hands of Dracula. The four-part first season is essentially an origin story for the main characters: Dracula (Graham McTavish) and his wife Lisa (Emily Swallow), Trevor Belmont (Richard Armitage), Sypha Belnades (Alejandra Reynoso), and Alucard (James Callis).

The series begins by setting up Lisa, a woman of science, who charms misanthropist Dracula. When she’s later burned at the stake by the Church that brands her a witch, Dracula’s wrath unleashes itself in the form of opening the gates of Hell and letting the monsters loose on the citizens of Wallachia.

Trevor is a reluctant hero, who is happy spending his days drinking instead. But when he tries to save a group known as the Speakers, he lands himself in a situation that leads him to meet spellcaster Sypha and Dracula’s son Alucard. We didn’t think the show is in the same vein as the video game inspiration, though other critics have been much kinder.

How to access: Netflix
Time commitment: 1 hour and 40 minutes

The Magicians
After a middling first season that failed to light up with critics, The Magicians distilled its ideas to emerge with a better sense of what it wanted to say. Season two picked up where the season one finale left off, with Julia (Stella Maeve) continuing her descent into the dark side, coming to an agreement with Beast (Charles Mesure) to end Reynard (Mackenzie Astin).

Elsewhere, Quentin (Jason Ralph), Alice (Olivia Taylor Dudley), Penny (Arjun Gupta), and Margo (Summer Bishil) set out to a find a weapon that will help them kill Beast and return to their world. Eliot (Hale Appleman), meanwhile, struggles with being a king.

The second season, now available on home media, has been praised for its production level, and blend of creepiness, cynicism and humour, which contributes into making a better show overall. The Blu-ray also provides a gag reel and a behind-the-scenes featurette.

How to access: Amazon US, Amazon Video US, Google Play Movies, iTunes US, or Microsoft Store
Time commitment: 9 hours and 45 minutes

Movies:
War for the Planet of the Apes
In this third chapter of the Planet of the Apes reboot franchise, Caesar (Andy Serkis) and his fellow advanced apes are pitted against a human army led by a man simply known as the Colonel (Woody Harrelson), who channels his inner Marlon Brando for a Kurtz-style performance straight from Apocalypse Now.

Co-written and directed by Matt Reeves, who also directed 2014’s predecessor, War for the Planet of the Apes is another brilliant chapter in what we believe has been the past decade’s best trilogy. It combines strong storytelling with a formidable character arc and top-notch visual effects and motion-capture work, something Serkis has become a pioneer of.

The film is darker and more pessimistic than previous entries in the series, and in the process, it shows where most other Hollywood blockbusters go wrong with their gritty approach. Hopefully, the powers that-be will let the trilogy rest, though that's unlikely given Reeves' aforementioned comments.

War for the Planet of the Apes: A Fitting End to This Decade's Best Trilogy

How to access: Out in cinema halls
Time commitment: 2 hours and 20 minutes

Elle
Winner of the Golden Globe Award for Best Foreign Language Film, Elle is the story of a businesswoman named Michèle (Isabelle Huppert) who runs a successful video game company. Her life changes when someone assaults her in her home, and owing to her past experience with the police, she takes a radically different approach to tracking him down.

Directed by Paul Verhoeven (Starship Troopers) and written by David Birke, based on the novel Oh... by Philippe Djian - which won the Prix Interallié in 2012 - Elle shines owing to its two pillars, in the careful and nuanced work of its lead actress Huppert, who was nominated at this year’s Oscars, and Verhoeven’s finesse in presenting a story of great moral ambiguity, and a character study that touches on some seriously controversial themes.

The Lost City of Z
Based on David Grann’s 2009 non-fiction book of the same name, The Lost City of Z is the story of British explorer Percy Fawcett (Charlie Hunnam), who travelled into Amazon multiple times during the early 20th century and discovered evidence of an unknown, but advanced, civilization.

Though he was derided by his peers, Fawcett kept going back, along with his wife Nina (Sienna Miller), son (Tom Holland), and aide-de camp (Robert Pattinson). Those trips culminated in his mysterious disappearance in 1925, with about 100 people since having disappeared or died themselves while looking for Fawcett.

Grann’s book was tapped by Brad Pitt’s production company, and brought to life by writer-directed James Gray (The Immigrant). Critics have praised Hunnam's performance, as well as the film’s visual grandeur and pacing, which gives it a feel of exploration stories of old.

How to access: Amazon Video US, Google Play Movies, iTunes US, or YouTube
Time commitment: 2 hours and 20 minutes

Fast and Furious 8
On the back of the franchise’s first billion-dollar entry, F Gary Gray (The Italian Job, Straight Outta Compton) takes over the Fast and Furious series for the eighth instalment, which will be the first since Tokyo Drift without Paul Walker, after the actor’s death in a car accident midway through filming of Furious 7. The rest of the ensemble returns as expected, with new additions in Scott Eastwood, Charlize Theron, and a cameo from Helen Mirren.

The Fate of the Furious – Universal’s rebranding of Fast and Furious 8 – picks up where the last one left off, with Dom (Vin Diesel) and Letty (Michelle Rodriguez) honeymooning in Cuba. After a mysterious hacker named Cipher (Theron) shows up with blackmail material, Dom helps her steal some heavy-duty weapons. Now, the gang is forced to go up against one of their own.

It’s not a great movie, overall, but loyalists probably won’t care. Before you decide to fork over the money for the disc/ digital copy, we’ve got a detailed review that delves into what the film does wrong.

How to access: Amazon US, Amazon Video US, Google Play Movies, iTunes US, or YouTube
Time commitment: 2 hours and 16 minutes

Video games:
Final Fantasy XII: The Zodiac Age
Improving upon the 2006 classic Final Fantasy XII, FFXII: The Zodiac Age is a HD remaster that brings updated graphics (HD for the first time) and an orchestrated score, alongside a reconstructed battle design, a revamped job system, newly implemented trophies, and share functions. It’s a fantastic opportunity for newcomers to experience this grand sci-fi adventure.

The game is set in the world of Ivalice, which you’ll learn more about as you play through. Princess Ashe, the heir to the Dalmasca throne, a kingdom left in ruins by the Archadian conquerors, must embark on a journey to free her nation from the tyranny. Her allies include a young man named Vaan who lost his family, a disgraced knight called Basch, pirate Balthier who we think is the FF equivalent of Han Solo, and his rabbit-like partner Fran.

We really enjoyed the remaster as a whole, noting the improvements to character progression, depth in combat, and fantastic story as positives.