And he’s “absolutely cool” if you compare the supernatural mystery series with Stranger Things.

A Netflix horror series about a bunch of small-town kids trying to solve a supernatural mystery, which is being investigated in parallel by a cop struggling as a single parent with his young daughter. No, this isn't Stranger Things. In fact, it's the (slightly superficial) description for the next Indian original series — Typewriter — from Kahaani writer-director Sujoy Ghosh. Out July 19, in the same month as the long-awaited return of that other horror show, one can't help but compare Typewriter to Stranger Things. And Ghosh is “absolutely cool” with that, he said.

“That's okay. I mean, that happened with Enid Blyton,” Ghosh told Gadgets 360. “I'm absolutely cool with that. I mean that thought didn't even cross my mind when I was writing, because when I started, Stranger Things season one has already happened. Just because that happened, I can't not make my character what it's supposed to be. It's a coincidence? It's a coincidence. But such is life. In every love story, a boy and girl meet, that doesn't mean I'm gonna change it.”

On a simplistic plot level, Typewriter is about a ghost in a haunted house, but Ghosh doesn't see it as harkening back to the old era of horror as with the 1980 British anthology series Hammer House of Horrors, or something akin to straight-up horror tales as with Aquaman director James Wan's 2013 film The Conjuring.

“This is more of [The] Goonies meets Ghostbusters, than somebody coming in your dreams and slashing you up,” Ghosh added. “And that's how it is. I think it's a modern horror story where life sometimes takes precedence over things that are happening around.”

That said, Typewriter does make use of horror genre elements such as jump scares, Ghosh said: “These are standard tropes. I mean, in a horror story, you have to have jump scares. That's what we're going in for. We are going in for the rollercoaster ride. We're getting paid to get scared. And we're going to go back in again to get scared, just like a roller coaster. I think as long as you don't overdo it, as long as everything is in the right proportion, it should be okay.”

Typewriter wasn't always planned as a series, with Ghosh initially wanting to make a film about “young kids going on an adventure to save the world. [...] This is basically, all our childhood fantasies, and what we grew up reading, what we grew up seeing, and what we all wanted to do. We wanted great things to happen to us, we wanted to jump on a mountain and go inside a cave, and run around some mysterious graveyards. I think that always stayed with me.

“And when I went to Netflix, they had a better idea, they said, 'Why don't you make it into a series?' And I realised maybe a series would help because we have so many characters, so many individuals within Typewriter, so maybe you need to expand on everybody's world. And that's how the thought of a series was very appealing to me, that's how the germ of the series started.”

The 53-year-old Calcutta-born (now Kolkata) filmmaker then set out to write Typewriter with his frequent collaborator Suresh Nair, whom he has previously worked with on Kahaani and Jhankaar Beats, and Badla co-writer Raj Vasant. Ghosh noted that “writing was another battle altogether” as it took them “a one and a half years to write to get it right”. 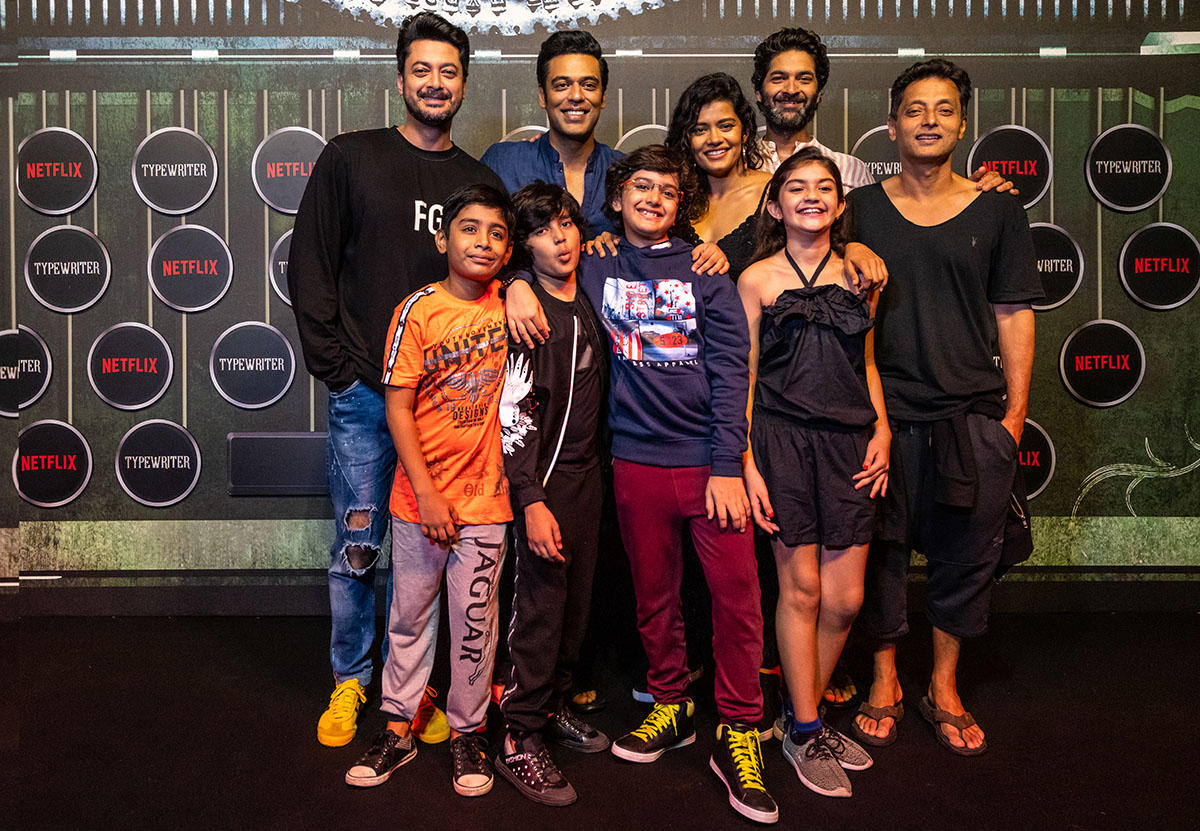 “You start by seeing everything that you've seen like The Goonies to It,” Ghosh explained. “So now you know what you can't make. And then, like when you're reading a book, you see these five children running towards the cave, right? So when you read a book, you tend to fantasise, you tend to think. In your head, you have certain things that what they will find inside the cave and then they find something in the cave which may or may not meet what you were thinking about.

“So you bring that thought and put it, that what you thought would be inside the cave. So that's how you do it. You try to make something which even though adheres to every standard ghost story ever — because every action film is the same, every love story is the same, every ghost story is the same — but you have to present it differently. This is how you get this thought process. Ke agar woh hota, toh kaise hota? [If that happened, then how would it happen?]. It's not rocket science, but sometimes you go right, sometimes you go wrong.”

What audiences will see

Of all the actors you'll see on-screen in Typewriter, 9-year-old Mikhail Gandhi — best known for playing a young Sachin Tendulkar in the 2017 biopic Sachin: A Billion Dreams, and a few Telugu-language films — possibly has the funniest casting experience of them all. Gandhi plays a somewhat dim-witted boy named Gablu on the Netflix series, but he originally auditioned for two other kid characters.

“First, I auditioned for Nick [played by Aaryansh Malviya], then I auditioned for Sam [played by Aarnaa Sharma], because that time my hair was very long,” Gandhi told Gadgets 360. Sam is the only female member of the children's gang, and this naturally elicited laughter from his fellow Typewriter cast members, including Purab Kohli (Rock On!!) and Palomi Ghosh (Nachom-ia Kumpasar), who play a cop and a woman with a mysterious past, respectively.

“Is this real? I didn't know this,” Ghosh, the writer-director, wondered before he too burst into laughter. Kohli responded: “I know for a fact that there are some auditions you haven't seen only.”

“Then after one more time, I auditioned for Gablu,” Gandhi continued, and added in a sing-song voice: “I got the role then I got to know I'll be working with Sujoy da, and it's for Netflix. And then, I went with the flow and it was great.”

For both Sharma and Kohli, it was reuniting with a director that they had worked with thrice apiece in the past.

“My journey of Typewriter starts a long time ago because I met Sujoy in 2004,” Kohli explained. “He was hanging about on a holiday on the film set of [My Brother... Nikhil] that I was working on. He played a small part also.”

Ghosh chimed in to note he was just an extra with no lines, but Kohli corrected him that he did have a line and that they also participated in a dance sequence.

“So I've known Sujoy a long time,” Kohli continued. “I've been longing to work with him for a very long time. So it was a no-brainer for me. I had the time, it was starting right away. It meant a little travel for me as I'd just shifted base to London. It was up-and-down quite often.” 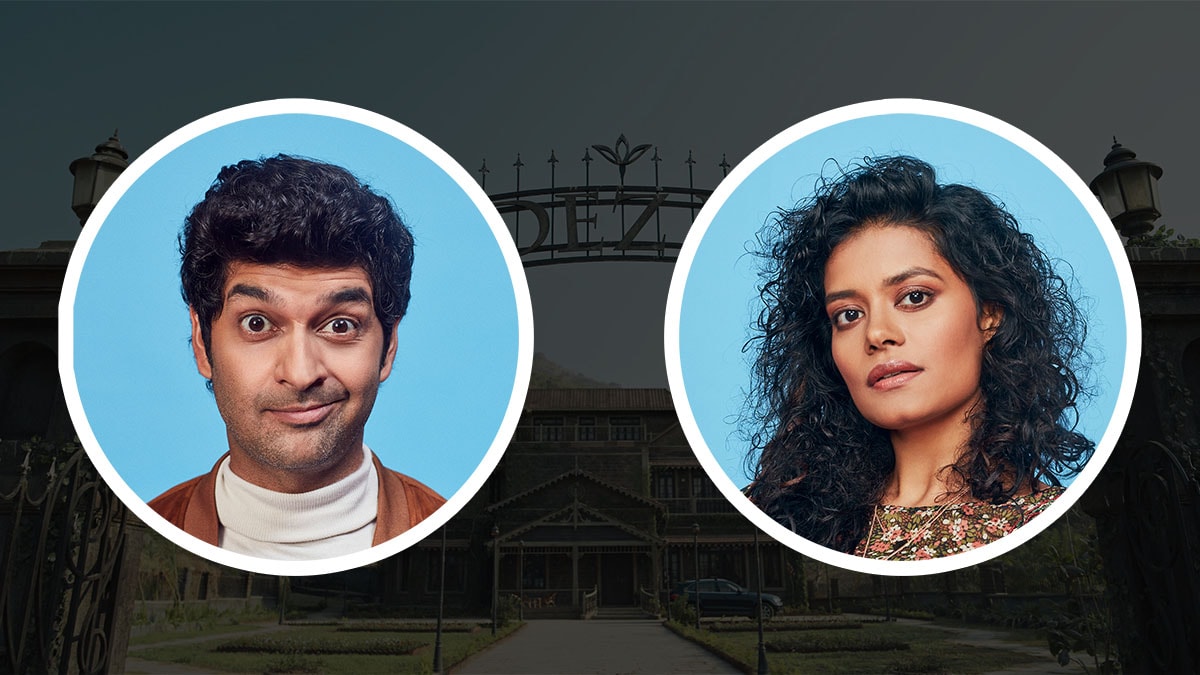 “It was a really impulsive decision on both parts, I think, because he was not fully convinced that I look like a father. That I could look old enough to be a father of a nine-year-old. He said, I remember him saying on the phone to me, 'Let's take the leap of faith.' And I think it's been a great decision. This is one of the most fulfilling productions I've been on in a long time.”

“It was a simple story beautifully written,” Kohli said of the script. “It was already telling of the part, you know, what the part is, what he feels, and parts that I didn't get, I didn't read between those lines. [Ghosh] would come, tell me. ‘Listen do this from this side. And now try and bring that in.'”

“And even when you watch him, he seems very sort of easy and a straightforward kind of character, but he's got lots of things playing on his mind. He is dealing with the relationship with his daughter, who's nine years old, single-handedly. [Trying to] understand what this girl is going through. At the same time, he has a responsibility of the law, to investigate what's going on, all these people are dying.”

“Even though Purab is a police officer, in my head, he's always a father,” Ghosh added to Kohli's point. “I saw him as a responsible father, responsible citizen. He's a police officer who knows his job. That's why he's head of that department; he must have done something to [get] there. But what he's still failing in is handling his daughter, he still doesn't know how to cope with the reality of how to bring up a kid. So that's how I approached it. So even though you see a police officer, you'll see a different police officer, because I'm showing you a father and not a police officer.”

“[I think] all the characters have come out so beautifully,” Kohli told Gadgets 360. “And for me, that is really the hook of the show. The scariness and all will go on, and it will keep coming, for the sake of trying to have a hook at the end of the episode. But I think for me, it's how the characters are interwoven together. And that's what I got when I watched the first episode is, 'Wow, I'm involved in all their lives now. I want to go into the second episode, not because of the fright, but because now I'm in their lives, and I want to see what their lives are going to hold.'

“And that's the difference between web series and films. In a film, you're limited with time, to indulgence in so many characters in 2 hours. It's becoming shorter nowadays. Here, you've five hours and when you have so many characters, you can really sort of use them, and [Ghosh has] done that. Grind us all out.”

Are there plans for a second season? “Honestly no, I have not started anything,” Ghosh said. “I think first and foremost, we'll just go through one season. And then we will decide.”

Though the writer-director is being coy on future plans, Kohli cheekily noted that “several carrots are left dangling” at the end of the first season. You can find out for yourself when Typewriter releases July 19 on Netflix.