Griffin Newman as Arthur Everest in a still from The Tick

Once a day, religiously, Griffin Newman – the star of Amazon's live-action reboot of The Tick, whose first season released on Prime Video last month – opens his Twitter account, and tweets: ".@realDonaldTrump F--- you." It started on the US election night on November 8 last year in anger at Donald Trump's ascendancy to US Presidency, and has since grown into something more.

"The Trump thing is almost like a therapeutic thing for me," Newman told Gadgets 360 on a phone call. "At least once a day, there's something he does I feel such immense frustration over that I have no sense of how to possibly deal with it other than to just, if I say this one thing on Twitter every day."

"It's almost like my mantra," he added with a laugh. "My little meditative exercise or something."

But Trump isn't the only thing Newman is quite vocal about on social media. He co-hosts a film podcast called Blank Check Podcast, and has been frequently heavily critical of Colin Trevorrow, the director of Jurassic World, and the now-former director of Star Wars: Episode IX.

"My choice to be that vocal is probably a terrible career move, the least strategic thing I could do," he added with a laugh. "But I'm a very opinionated person."

After the dismal reception to Trevorrow's The Book of Henry earlier this year, Newman tweeted a screen-grab of the film's Rotten Tomatoes score, and added: "Well, everyone knows Colin Trevorrow is confirmed to direct [sic] STAR WARS: EPISODE IX. What this tweet presupposes is... maybe he isn't?"

Asked how the Trevorrow thing came about, Newman pointed to the podcast's inception and replied: "I was doing the podcast at a point where I felt really bad about my career, and I was like: 'Eh, I don't know if it's really going to happen, so why don't I start saying what I think.' It sort of became this running joke like, 'Oh this podcast is on the account of me trying to ruin my career'."

That was before he was approached by The Tick creator Ben Edlund for the Amazon show. "But then this role came along, and there was this internal debate like: 'Well, do I try to muzzle my self now?'" he added.

"I try not to be incendiary on purpose, but I also feel like it's disingenuous to rewrite history in that kind of way," Newman said. "The Trevorrow thing has become kind of a joke now to a degree; it represents just this lack of tact I have in talking about the industry."

Pressed on whether he was hoping that Episode IX would get a new director, he said: "I would like that as a fan, sure. We'll see what happens."

Of course, when we spoke to Newman, he had no idea that Trevorrow would actually exit Star Wars: Episode IX, news to which he has since reacted in predictably-enthusiastic fashion on Twitter: "Congratulatory messages I've gotten today about the Trevorrow news >>> All other congratulatory messages over the rest of my life, combined." 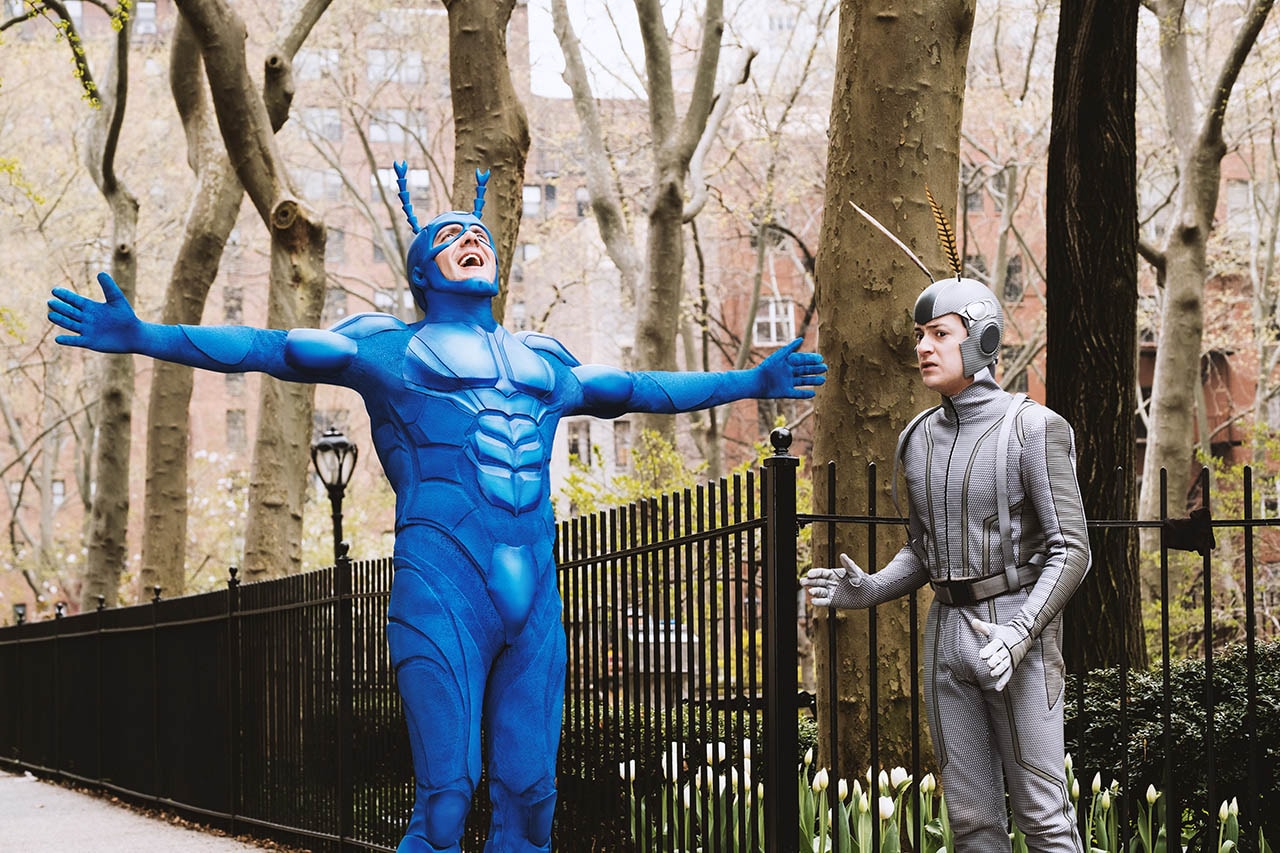 Peter Serafinowicz as the Tick, and Griffin Newman as Arthur Everest in a still from The Tick
Photo Credit: Amazon

A new version of Arthur
On The Tick, Newman plays the big blue superhero's reluctant side-kick Arthur Everest, whose grey-coloured moth-man suit drives the entire first half of the season. While Arthur has always been a comedic relief of sorts with previous iterations, Edlund decided to make him more central to the show for the reboot.

"Every other version of The Tick you meet Arthur when he's gone through his whole process of making this decision that he wants to be a superhero and deciding to go through with it," Newman explained. "And from there on out, you're watching this character struggle within this world he's fully committed to being part of. But [The Tick on Amazon] is a version of the character who's fighting with what he wants to be, and how he wants to operate, what his relationship with the Tick is."

That also impacted how the character would be portrayed. Newman noted that the biggest thing Edlund said to him was "wanting to make sure that the character had an integrity to him".

"[Edlund] didn't want the character to be played as a joke, [even though] it is a comedic property, and Arthur has always been this comedic archetype," he added. "The neurotic, fearful, overwhelmed, misplaced man in a sort of world. He wanted the character to still be funny, but be a character that you could actually really invest in, as a real person and care about, worry about."

The Tick is now streaming on Amazon Prime Video worldwide.

Update 11/09 7pm: Modified a quote after Newman reached out to the author on Twitter with a request.

Further reading: The Tick, Amazon Prime Video
Akhil Arora Email Akhil Akhil Arora covers entertainment for Gadgets 360, interviewing stars such as Christian Bale and Anurag Kashyap, covering series premieres, product and service launches across the globe, and looking at American blockbusters and Indian dramas from a global socio-political and feminist perspective. As a Rotten Tomatoes-certified film critic, Akhil has reviewed over 150 movies and TV shows in over half a decade at Gadgets 360. When he is not completely caught up with new film and TV releases, Akhil ...More
Samsung Galaxy Note 8 Pre-Bookings Reportedly Cross 72,000 in India, Registrations Top 2.5 Lakh
Xiaomi Mi MIX 2, Mi Note 3 Launch Set for Today: Live Stream, Specifications, and More