Star Wars: The Last Jedi Release Date in India, Cast, and Everything Else We Know So Far

Daisy Ridley as Rey in a still from Star Wars: The Last Jedi

Can you feel that disturbance in the Force? Star Wars: The Last Jedi is almost here. The eighth chapter of the massively popular space saga – from director Rian Johnson – will take us back to a galaxy far, far away, picking up right where we left off with Mark Hamill’s aging Luke Skywalker and his protégé in-wait, Daisy Ridley’s Rey on the aquatic planet of Ahch-To at the end of The Force Awakens.

Though we've seen a couple of trailers and multiple TV spots, Disney and Lucasfilm have been smart to keep all major Star Wars: The Last Jedi details under wraps, just as it did with 2015's Force Awakens. Hamill has also pleaded with viewers to not spoil the film for anyone for as long as they can. That said, we do have some idea of the film's story, and some information on the new characters – human, alien or droid – that we'll get to see.

The Last Jedi is out December 13 in a few countries, including Belgium, Denmark, France, Italy, Netherlands, Norway, and Sweden. It'll then expand to Australia, Brazil, Germany, Ireland, New Zealand, Russia, Singapore, South Africa, and the UK on December 14.

The worldwide release of The Last Jedi is on Friday, December 15, which is when it'll arrive in India, the US, Canada, and elsewhere. The film will open in Chinese theatres on January 5.

Everyone you saw in The Force Awakens, except for Harrison Ford's Han Solo, will return in The Last Jedi. That includes Hamill and Ridley, Carrie Fisher as Leia Organa, Adam Driver as Kylo Ren, John Boyega as Finn, Oscar Isaac as Poe Dameron, and Andy Serkis as Snoke via mo-cap. This is the last film appearance for Fisher, who passed away last December. She was expected to be a big part of Episode IX, which is being rewritten after Disney promised that it wouldn’t use CGI to portray her.

The Force Awakens didn’t tell us much about Supreme Leader Snoke, and Serkis has given us a hint at what to expect, saying he’s a predator who knows how to exploit individual weaknesses, drawing the young to his side with promises of power. “The thing about Snoke is that he is extremely strong with the Force, the dark side of the Force,” he added. “He’s terribly powerful, of course. But he is also a very vulnerable and wounded character.”

Returning supporting cast members include Lupita Nyong’o as Maz Kanata via mo-cap, Domhnall Gleeson as General Hux, Gwendoline Christie as Captain Phasma, and Anthony Daniels as C-3PO. The other two droids, R2-D2 and BB-8, are also back. As for the crew, Lucasfilm president and producer Kathleen Kennedy, and legendary music composer John Williams return in their respective roles. 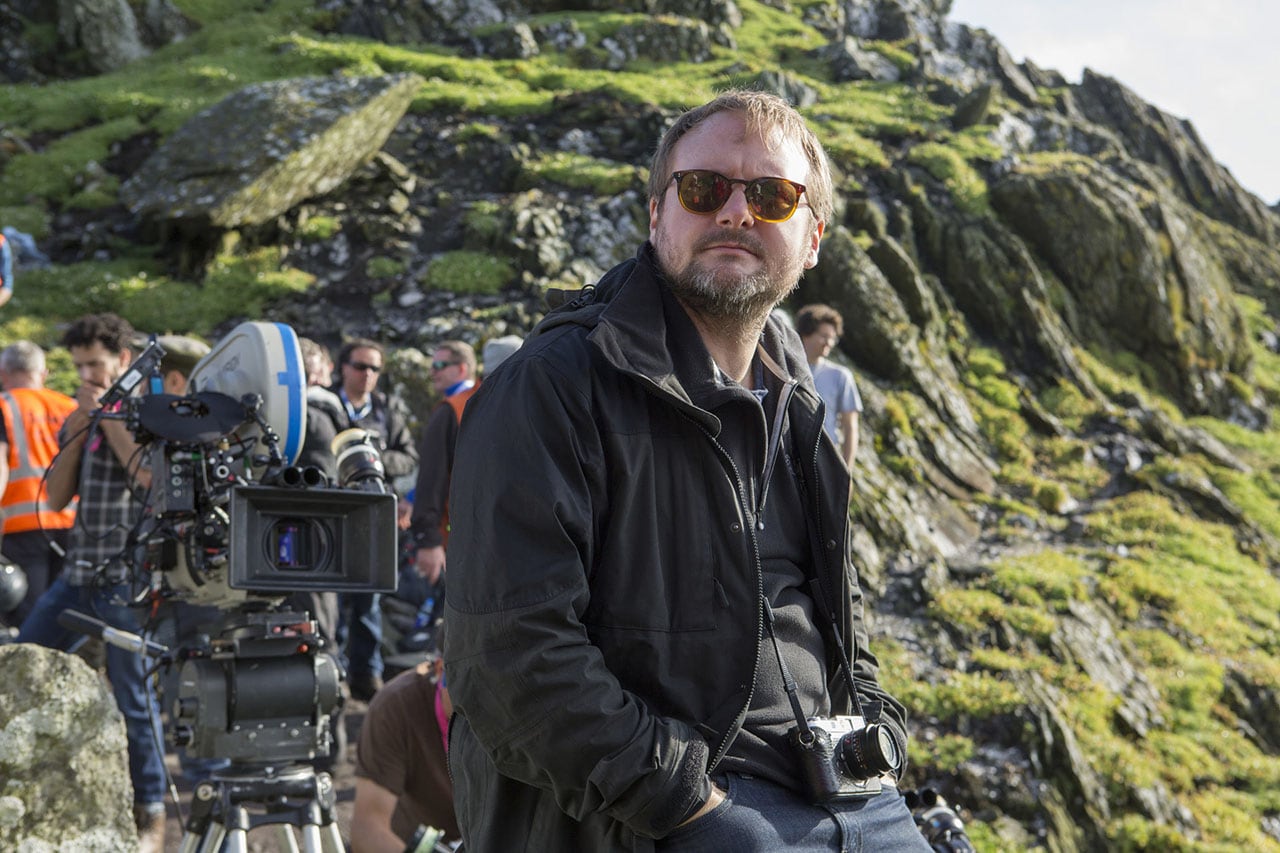 Rian Johnson, the 43-year-old director behind films such as Looper (2012) and Brick (2005), takes sole credit as writer and director. His frequent collaborator Steve Yedlin serves as the cinematographer. The film has been edited by Bob Ducsay, who worked with Johnson on Looper, and has edited the likes of Godzilla (2015), and San Andreas (2015).

Interestingly, Star Wars: The Last Jedi will have the lowest number of wipe transitions of any Star Wars movie, with just 12. The Force Awakens had itself moved away from that Star Wars tradition – George Lucas was inspired by Akira Kurosawa in using them – with 19, as opposed to 50 in A New Hope, and a record 102 in Revenge of the Sith.

New main cast members include Benicio del Toro as DJ, Laura Dern as Amilyn Holdo, and Kelly Marie Tran as Rose Tico. DJ is a slicer, which is the Star Wars equivalent of a computer hacker and codebreaker. He has been described as a "shady character of unknown alliances," and he’s not actively supporting either the First Order or the Resistance.

Amilyn is a Vice Admiral in the Resistance, and has been called eccentric. She’s expected to play an important role in The Last Jedi, and rumours abound that she’ll take over from Organa going forward. Rose is "a maintenance worker for the resistance" who becomes part of a "mission behind enemy lines" with Finn after he wakes up. They meet DJ on the planet Canto Bight because he’s supposedly the best in the galaxy, Boyega has revealed. Kelly Marie Tran as Rose Tico, and John Boyega as Finn in a still from Star Wars: The Last Jedi
Photo Credit: Disney/Lucasfilm

How long is Star Wars: The Last Jedi?
The Last Jedi is now the longest Star Wars film yet, with a confirmed runtime of 2 hours and 30 minutes (150 minutes), including credits. That’s eight minutes longer than the previous record holder, Episode II: Attack of the Clones, at 142 minutes. All Star Wars films have been longer than 2 hours, with the first – Episode IV: A New Hope – still being the shortest at 121 minutes.

Are there any new creatures and droids?
Ever since the first trailer for The Last Jedi, a lot of chatter has been focused on the tiny species Porgs, seen together with Chewbacca aboard the Millennium Falcon. The creatures are native to Ahch-To (where Luke was found), and were inspired by the puffins that live on Skellig Michael, the real-life island used to depict the fictitious planet.

The other CGI creatures that have received a lot less attention are Vulptices, plural for Vulptex. Modelled on Earth’s fox, they have a white, crystalline fur, owing to their consumption of the mineral planet they live on, the salt-covered Crait. Dubbed the “crystal fox”, Vulptex reside in burrows and tunnels beneath Crait’s surface.

A featurette on the crystal fox, who will be seen in Star Wars: The Last Jedi
Video Credit: Disney/Lucasfilm

Over on the dark side, we’ve the First Order-version of BB-8, in BB-9E. Think of it as the evil twin. It’s painted mostly in black, and has a flat head on top of a body like BB-8’s. Though we’ve no idea of its role, you can already buy a remotely-operable version of BB-9E, thanks to Sphero.

Is there anything we know about the story?
Short answer: no. What we do know is that The Last Jedi will pick up not long after The Force Awakens, with the trailers showing Rey starting her Jedi training with a hesitant Luke watching over, likely fearing that he’ll fail her as he did his last student. If you forgot, Luke has been in exile ever since his nephew, Ben Solo (Adam Driver), turned to the dark side and became Kylo Ren, killing all his fellow Jedi apprentices in the process.

Luke escaped with his life, but his inability to keep Ben away from the influence of Supreme Leader Snoke weighs heavily on him. That burden will only increase once he learns from Rey that Kylo Ren killed his father Han Solo. From the tone and scenes presented in the trailers, it seems that Rey and Luke might hit a breaking point after he witnesses her power.

Possibly left on her own, it seems that Rey will get herself in trouble, as there’s a shot of her in Snoke’s throne room, with him torturing her with his powers. A separate touching moment towards the end shows her admitting to Kylo: “I need someone to show me my place in all this." Though Kylo tasted defeat at her hands and came away with a facial scar in The Force Awakens, that scene hints that he might still be willing to help her in some way.

Meanwhile, Finn will have his own journey in The Last Jedi, having spent a lot of time with Rey in The Force Awakens. After he wakes up, he’ll go undercover with Rose on a mission that puts him back in First Order uniform, which eventually lands him in a fight with Captain Phasma.

What about that title, who is the last Jedi?
It’s a question that has been asked ever since the name Star Wars: The Last Jedi was revealed. Initially, people though it was referring to Luke, Rey or both, since the term Jedi is the same in its plural form. Since then, the director Rian Johnson has said that Luke is the eponymous Jedi in the film’s title, so that’s that. Of course, that could just be a misdirection on his part, and we won’t know until we see for ourselves. What’s the future of Star Wars?
The new trilogy will conclude with Episode IX, from returning director J.J. Abrams, who helmed The Force Awakens. Abrams’ return was announced in September, a week after Colin Trevorrow (Jurassic World) left the project, reportedly owing to clashes with Lucasfilm executives. That has meant a delay in release, with Star Wars: Episode IX now slated for December 20, 2019.

Before that, we’ll get another standalone film in Solo: A Star Wars Story from Ron Howard, who finished filming in October, after replacing the original directors. It’s set in the past with a younger Han Solo, played by Alden Ehrenreich, and will release May 25, 2018. Disney-Lucasfilm also have a slot for 2020, with project options including Boba Fett, Obi-Wan Kenobi, Yoda, Jabba the Hutt, and Ahsoka Tano.

Plus, Disney greenlit a new trilogy with Rian Johnson in November, with all new characters and locations. Both Disney CEO Bob Iger and Lucasfilm president Kathleen Kennedy have said that the studio is already thinking of the next decade for Star Wars, and Johnson’s trilogy will surely form a big part of that.

Further reading: Star Wars, The Last Jedi, Rian Johnson, Disney, Lucasfilm
Akhil Arora Email Akhil Akhil Arora covers entertainment for Gadgets 360, interviewing stars such as Christian Bale and Anurag Kashyap, covering series premieres, product and service launches across the globe, and looking at American blockbusters and Indian dramas from a global socio-political and feminist perspective. As a Rotten Tomatoes-certified film critic, Akhil has reviewed over 150 movies and TV shows in over half a decade at Gadgets 360. When he is not completely caught up with new film and TV releases, Akhil ...More
Vodafone's Rs. 399 RED Basic Plan Offers 10GB Data, RED Together, Data Roll Over Benefits

Star Wars: The Last Jedi Release Date in India, Cast, and Everything Else We Know So Far
Comment