South Park: The Fractured But Whole, The Walking Dead, and More – The Weekend Chill

Last Friday, Fox released a trailer for The New Mutants, a horror expansion to the X-Men franchise starring Game of Thrones’ Maisie Williams, The Witch’s Anna Taylor-Joy, and Stranger Things’ Charlie Heaton. It’s directed by Josh Boone (The Fault in Our Stars), and will be out April 13, 2018.

On Sunday, Deadpool star Ryan Reynolds revealed that Deadpool 2 had wrapped production, ahead of its June 2018 release. A similar announcement came from director Simon Kinberg via Instagram, who said the next X-Men film, Dark Phoenix, has also finished filming. That one will hit cinemas November 2, 2018.

Then on Monday, we got the first full trailer for Marvel’s Black Panther, the standalone adventure for the character – played by Chadwick Boseman – introduced last year in Captain America: Civil War. He’ll need to cull a civil war of his own back in his native Wakanda after the death of his father. The film will release February 16, 2018.

Later that day, a report from Variety claimed that Reid Scott (Veep) had been added to the cast of Sony’s Spider-Man spin-off Venom. Scott joins Tom Hardy, Michelle Williams, Riz Ahmed, and Jenny Slate. Venom is slated to release on October 4, 2018.

Netflix has revealed that it plans to up its content spending to $8 billion (about Rs. 52,044 crores) in 2018, which will include 80 original films. That’s a big number for any studio, let alone Netflix, and it shows how focused the streaming service is with ramping up feature-length original content.

Lastly, on Thursday, Netflix provided a release date for Marvel's The Punisher, the Daredevil spin-off starring Jon Bernthal as Frank Castle. The show will be out November 17, after being delayed due to the Las Vegas shooting earlier this month. We'll have our review of the show ready for you ahead of time, but it's clear from the trailer that it's going to be explosive.

TV:
The Walking Dead
Heading into its eighth season, The Walking Dead may be past its peak – viewers fell last year for the second season in a row – but it’s not running out of material to adapt any time soon. This year’s story is based on All Out War, volumes #20 and #21 of the long-running comics by Robert Kirkman, who’s also a co-creator on the show.

It will focus on a major war that’s happening between Rick (Andrew Lincoln) and the people of Alexandria, Hilltop, and The Kingdom, against Negan (Jeffrey Dean Morgan) and his Saviors. It has already given us the death of two beloved characters, and expect more to fall as the war scales up in the new season.

When The Walking Dead’s season 8 premieres on Sunday in the US, it will be its 100th episode, a notable milestone for a serialised drama. There aren’t any proper reviews out yet, but you can be assured it will offer big action and popcorn-movie thrills, even if it’s at the cost of coherent storytelling. 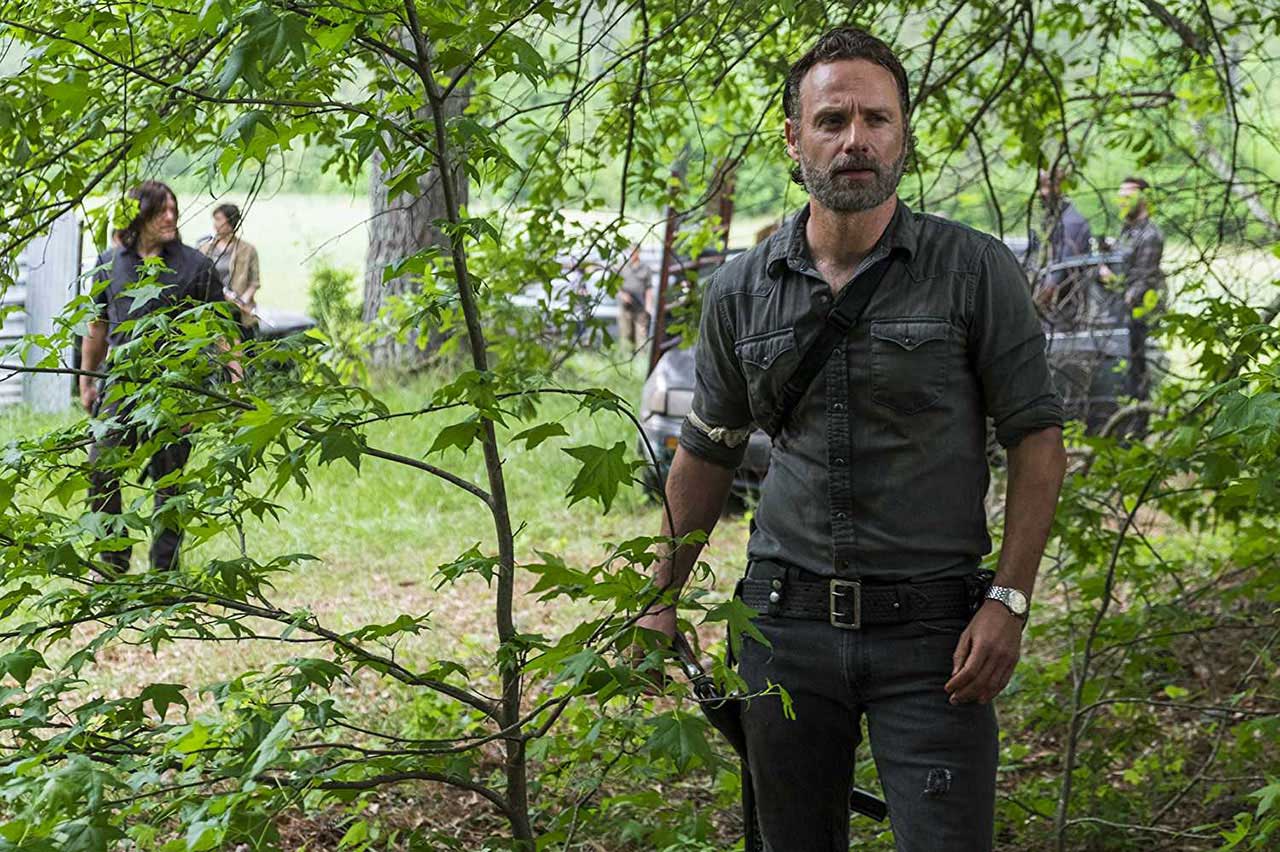 Star Wars Rebels
Set fourteen years after the fall of the Galactic Republic in Star Wars: Episode III – Revenge of the Sith and five years before Star Wars: Episode IV – A New Hope, the 3D animated series Rebels kicked off its fourth and final season earlier this week with the Ghost crew being joined by Sabine’s family and other Mandalorian allies, to rescue her father.

The new season began with a two-parter one-hour episode, and will be followed by 13 more episodes, which co-creator Dave Filoni has described as being more serialised than ever before. And this being the final season, the writers aren’t shying away from exploring some darker corners and confronting higher stakes.

A beloved character from Star Wars: The Clone Wars will also join Ezra, Kanan, and Sabine this year, as well as Saw Gerrera from Rogue One. Watching Rebels is also a great way to hold you over until The Last Jedi arrives in theatres in December.

Red Oaks
Amazon’s 1980s coming-of-age comedy returns Friday for its third and final season, which finds David Myers (Craig Roberts) and his friend Wheeler (Oliver Cooper) living in New York City to pursue their dreams of making movies. There, he’s starting on the lowest rung on the ladder, being a production assistant.

Meanwhile, his first filming job comes courtesy of the Red Oaks Country Club of course, where he worked as an assistant tennis instructor during the summer off from junior year. David is also struggling to find love in his life, while the people around him all seem to have someone, including Wheeler’s divorced Dad.

All 10 episodes of the new season are available on Amazon Prime Video Friday itself. Red Oaks grew in critical reception from first to second season, though there are no reviews available yet for the third.

Movies:
1922
The year of Stephen King continues with Netflix’s 1922, an adaptation of a King story about a man who conspires with his son to kill his wife. Starring Thomas Jane, Neal McDonough, and Molly Parker, 1922 is told from the perspective of Wilfred James (Jane), an unreliable narrator who confesses to the murder.

But after he buries the body, James finds himself being terrorised by rats and when things start to unravel, becomes convinced his wife is haunting him. The film also stars Kaitlyn Bernard, Brian d'Arcy James, Dylan Schmid, and Bob Frazer. 1922 is a slow burner, as it piles upon a layer over layer to build into something big.

Critics feel the movie – by way of co-writer-director Zak Hilditch – does a good job in understanding King’s biggest strengths, which lie in building tension and creating an atmosphere.

How to access: Netflix
Time commitment: 1 hour and 41 minutes

Other mentions:
Hulu has a new documentary called Too Funny to Fail, which explores and the rise fall of The Dana Carvey Show, a short-lived TV series that had a writing cast made of future comedy greats, including Louis C.K., Steve Carell, Stephen Colbert, Robert Smigel, and Charlie Kaufman. It’ll be available Saturday, October 21.

Amazon added new content this week, with the highlight being Steven Spielberg’s Close Encounters of the Third Kind. As for Netflix, you can try out Patton Oswalt’s new comedy special: Annihilation, or go through our monthly guide.

Video games:
South Park: The Fractured But Whole
Following up on 2014’s The Stick of Truth and written by series creator Trey Parker, South Park: The Fractured but Whole takes fans back into the crime-ridden underbelly of South Park. This time, the parody spotlight is on superhero franchises, with Cartman’s own plans for a franchise splintering the group into two rival factions.

On one side there’s Coon and Friends, with Cartmand and his allies, and there’s Freedom Pals on the opposite end, led by Kenny’s Mysterion. You play as The New Kid, and the game gives you the chance to create your own origin story, alongside superpowers and taking selfies. The Fractured But Whole has turn-based combat, as well as puzzles to solve.

In our review, we pointed out the satisfying combat system, customisation options, solid story and dialogue as highlights, with the only downside being that it’s more for South Park fans than anyone else. The game also manages some excellent social commentary on the way.

How to access: PlayStation 4, Xbox One, or Steam for PC
Time commitment: 30 hours

Gran Turismo Sport
The first GT game for the PS4 is also the first GT game in four years, with Gran Turismo 6 releasing all the way back in 2013. With Sport, series creator Kazunori Yamauchi is promising a new era of GT, with the most realistic simulation racing game in terms of graphics, sound and physics engine. Moreover, GT Sport is built from everyone, be it a child or a retiree.

That’s thanks to GT Sport’s Driving School, which will teach you everything about driving with over 50 driving lessons. These lessons have three levels, which help push yourself to the next level, and get you into the groove for a sim experience. At the same time, there’s enough depth here to satisfy the hard-core GT fans.

We noted the Driving School as a big plus in our review, alongside the visuals, driving realism, and challenge mode in single-player campaign. That said, the game doesn’t have enough content with the latter, and it’s even more egregious that some of it requires you to be always-online. The focus seems to be on the multiplayer action.

How to access: PlayStation 4
Time commitment: As much as you want, really

South Park: The Fractured But Whole, The Walking Dead, and More – The Weekend Chill
Comment