Solo: A Star Wars Story Release Date in India, Cast, Budget, and Everything Else You Should Know

Less than six months after the last Star Wars movie, the space saga is back with a blast from the past. Set before the events of Episode IV – A New Hope, Solo: A Star Wars Story is a standalone chapter that follows a young Han Solo, the character made famous by Harrison Ford, before we met him in the original trilogy. The film is in the vein of Rogue One, though Disney has signed the actors for potential sequels this time around, in case it turns out to be a big hit.

Solo: A Star Wars Story has had its share of troubles, with the original directors, Phil Lord and Christopher Miller (The Lego Movie) getting fired four months into production. Lucasfilm has managed to keep the film on schedule despite that, as it releases later this month worldwide. Thanks to trailers, TV spots, and interviews, here's everything we know about the newest Star Wars movie, including returning characters, story details, and when you can watch it.

Solo: A Star Wars Story release date in India and other countries

Solo is out Wednesday, May 23 in Finland, France, Indonesia, Italy, Netherlands, Norway, and Sweden. The Star Wars anthology film will open Thursday, May 24 in Argentina, Australia, Brazil, Germany, Israel, Portugal, Russia, Singapore, and the UK.

Solo: A Star Wars Story will release Friday, May 25 in India, the US, China, Spain, Hong Kong, Mexico, Turkey, and South Africa. The film will have a delayed release in Japan, where it opens June 29.

Though Solo features the return of Han and some old favourites, all of them are played by new actors. Alden Ehrenreich (Hail, Caesar!) steps into the iconic character played by Harrison Ford in Episodes IV-VII, while Donald Glover (Atlanta) portrays Lando Calrissian, whom we know as Han's old friend and the original owner of the Millennium Falcon, played by Billy Dee Willaims in Episodes V and VI.

Chewbacca, the Wookiee and Han's best friend, is back as well, with Joonas Suotamo returning in the role he inherited from Peter Mayhew in Episode VII – The Force Awakens.

Beyond that, Solo: A Star Wars Story features a bunch of new characters: Woody Harrelson (War for the Planet of the Apes) as Tobias Beckett, a criminal who becomes Han's mentor; Emilia Clarke (Game of Thrones) as Qi'ra, Han's partner-in-crime who grew up together; Thandie Newton (Westworld) as Val, a character we don't know anything about; Phoebe Waller-Bridge (Fleabag) as L3-37, Lando's droid companion; and Paul Bettany (Avengers: Infinity War) as Dryden Vos, a crime lord.

Jon Favreau has lent his voice to Rio Durant, an alien; and Anthony Daniels (C-3PO) plays a Wookiee friend of Chewbacca.

There is no official word on the budget from Disney. Multiple reports claim it's in the range of $200 million as with Rogue One, though that was before Ron Howard stepped in for reshoots. A new report since then said his reshoots have nearly doubled the budget, but it should be taken with a big pinch of salt. With Howard spending over three months as director, it's easy to say the budget for Solo: A Star Wars Story is in excess of $200 million though.

Solo: A Star Wars Story production troubles
It's not been an easy road to the screen for Solo. The original directors, Lord and Miller, thought they were hired to bring a comedic touch to Star Wars, since they're best known for The Lego Movie and 21 Jump Street. That's why the duo brought their heavy improvisational technique to Solo, and reportedly shot multiple variations of each scene, taking a dozen takes that weren't always in line with what the script from father-son Lawrence and Jonathan Kasdan said. 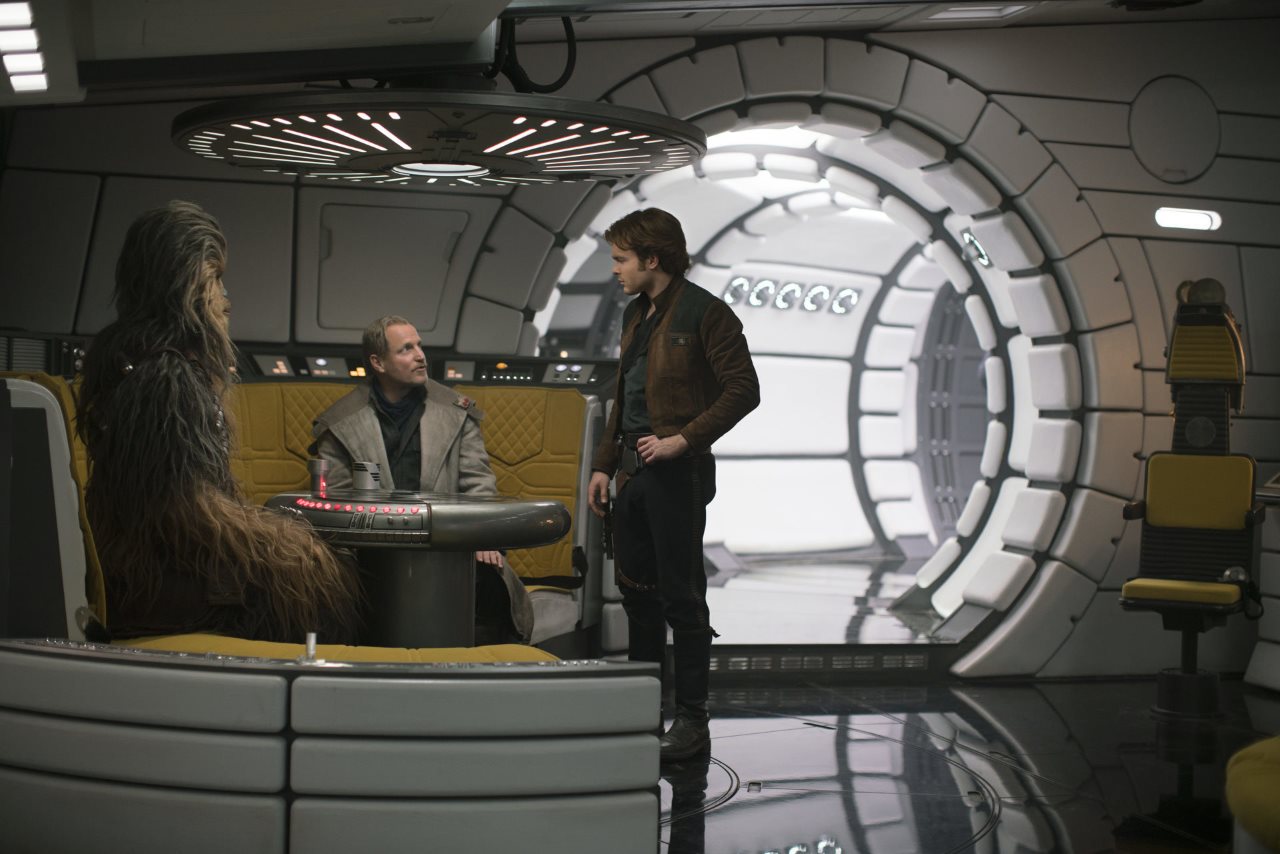 This filmmaking approach didn't sit well with the elder Kasdan, who was seen as a "shadow director" by Lord and Miller on the London set, and a refusal to compromise led to frequent clashes with Lucasfilm execs, including president Kathleen Kennedy. They were ultimately fired four and a half months into production, and then replaced by Oscar-winning Ron Howard, who was seen as a safe choice to lead the troubled production.

Reportedly, Howard reshot most of the film over the next few months, and a recent behind-the-scenes look claims that 70 percent of the finished film is Howard's, while the rest belongs to Lord and Miller. In terms of on-screen credit, Howard will be the sole director while Lord and Miller will be named as executive producers.

Solo: A Star Wars Story will run for 135 minutes (2 hours and 15 minutes, if you prefer). That's exactly same as The Force Awakens, and just two minutes longer than the previous anthology film, Rogue One.

What is Solo: A Star Wars Story about?
The simplest way to describe Solo is that it's an origin story for Han Solo, the smuggler, thief and scoundrel whom Luke Skywalker and Obi-Wan Kenobi first met in the Mos Eisley cantina in Star Wars: Episode IV – A New Hope. It will follow a young Han meeting the Wookiee Chewbacca, who becomes his side-kick and first mate, and their encounter with Lando Calrissian, and how the latter lost the Millennium Falcon in a bet.

Moreover, the trailers for Solo have revealed that Dryden Vos assigns a mission to Tobias Beckett, who then assembles a crew consisting of Han, Qi'ra, Val, and possibly Lando. We don't know what the job is, but it's good to have some mystery surrounding the film, given we already know so much about Han's life. There's a very high probability that the famous Kessel Run that Solo bragged about making in less than 12 parsecs will be featured.

What's next in Star Wars?
While Lucasfilm has been releasing new Star Wars films in December each year since 2015, Solo disrupts that trend to coincide with the 41st anniversary of A New Hope, which released in May 1977. Owing to that, fans will now have to wait a year and a half for the next chapter of the space saga, Star Wars: Episode IX, in December 2019.

The road beyond that is unclear at this point, with Disney having not announced anything for its slot in 2020, though it will be another standalone adventure. The projects under consideration include Boba Fett, Obi-Wan Kenobi, Yoda, Jabba the Hutt, and Ahsoka Tano.

And while other projects do exist, in a new film trilogy from The Last Jedi director Rian Johnson, a series of films from Game of Thrones creators David Benioff and D.B. Weiss, and a live-action TV series from Jon Favreau, there's no word on when we'll get to see any of it.

Further reading: Solo A Star Wars Story, Han Solo, Star Wars, Disney, Lucasfilm
Akhil Arora Email Akhil Akhil Arora covers entertainment for Gadgets 360, interviewing stars such as Christian Bale and Anurag Kashyap, covering series premieres, product and service launches across the globe, and looking at American blockbusters and Indian dramas from a global socio-political and feminist perspective. As a Rotten Tomatoes-certified film critic, Akhil has reviewed over 150 movies and TV shows in over half a decade at Gadgets 360. When he is not completely caught up with new film and TV releases, Akhil ...More
'Google One' Upgrades Paid Google Drive Storage Plans With New Features, Lower Rates
Netflix's Lost in Space Renewed for Season 2

Solo: A Star Wars Story Release Date in India, Cast, Budget, and Everything Else You Should Know
Comment