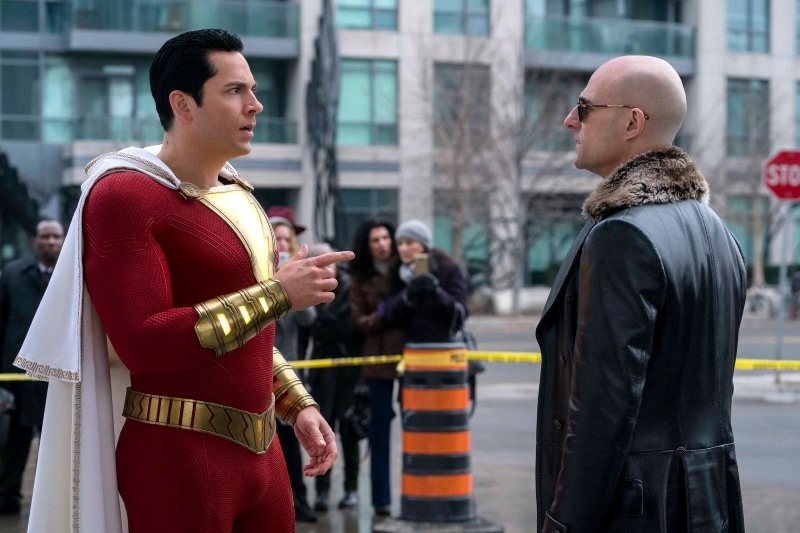 While DC avoided post-credits scenes in most of its earlier films — which has been a Marvel staple — they have slowly become a part of its vernacular, having been present in both Justice League and Aquaman. Shazam!, out this weekend, continues that trend. There are two scenes during the credits in Shazam!, one sandwiched in the middle and the other right at the very end. The former is the more important one, as it sets up a potential Shazam! 2, were Warner Bros. inclined to green light one, while the latter is more of a gag.

Obviously, major spoilers ahead for Shazam! Stop reading if you haven't seen the latest DC movie.

Shazam! ends with the defeat of the film's villain, Dr. Thaddeus Sivana (Mark Strong), after the titular hero gifts his powers to all his foster siblings with the help of the magic staff. In the mid-credits scene, Sivana is spending his time in a prison cell, sketching a series of symbols on the wall, similar to the ones that he saw when the wizard Shazam summoned him and the ones that helped create a portal to the Rock of Eternity, the wizard's lair that holds the Seven Deadly Sins.

Sivana then hears a voice that speaks to him but he's unable to discern which way it's coming from. He ultimately realises that there's a talking alien worm in his cell and wonders if he's gone crazy. His incessant sketching-on-the-walls can be seen as further proof. But the talking alien worm is real. He's called Mister Mind in the comics, where he's part of a supervillain team called Monster Society of Evil.

He's in fact shown earlier in Shazam!, when Sivana first visits the wizard's lair, as a child. Mister Mind is then seemingly locked in a tiny transparent box by the wizard, presumably to prevent him from causing any trouble. And it's implied that he escaped later on after the elder Sivana unleashes the Seven Deadly Sins, as the box is shown to be broken when Billy Baston (Asher Angel) visits the lair as his superhero alter ego (Zachary Levi) with his foster siblings, while on the run from Sivana.

The mid-credits scene concludes with Mister Mind proposing an alliance to Sivana — "You assume there's only one way to gain magic," he says. "The Seven Realms are about to be ours." — which ostensibly sets up a potential sequel to Shazam!

If you decided to leave after the mid-credits scene, congratulations, you didn't miss anything consequential. The post-credits scene is really more of a jab at Aquaman, that other DC character who got his own film a few months ago.

It opens with Billy (Levi) staring at a fishbowl, while his foster brother and best friend, Freddy (Jack Dylan Grazer), asks him to concentrate. He's trying to see if one of his many superpowers includes the ability to talk to fish, just like Aquaman. Billy eventually gives up and declares that being able to converse with sea creatures is "not that cool" anyway. In response, Freddy tugs at the Aquaman t-shirt he's wearing.