Shadow of the Colossus, Queer Eye, and More – The Weekend Chill 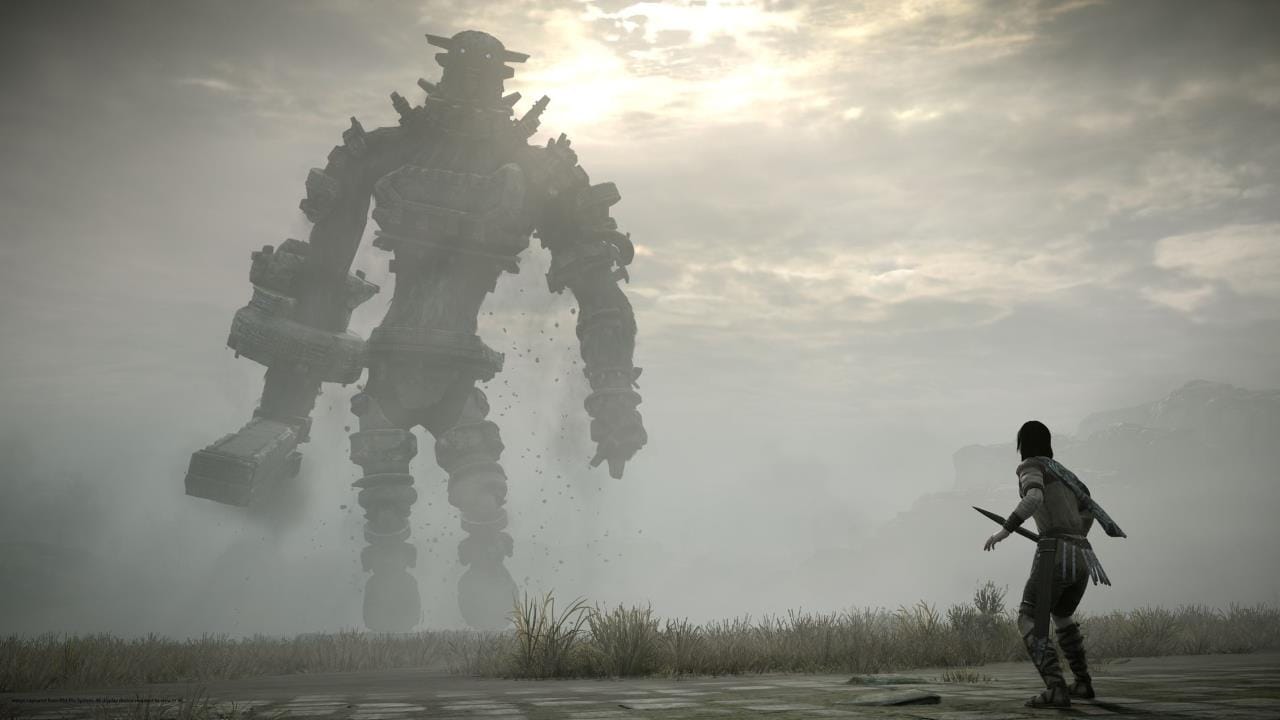 Last Friday, Starz announced that it had found a new showrunner for American Gods season 2 in Jesse Alexander, who worked with co-creator Bryan Fuller on Hannibal and Star Trek: Discovery. Finding a new chief was necessitated after both Fuller and Michael Green left the show on grounds of not getting the budget they wanted.

J.J. Abrams’ new sci-fi series project, Demimonde, has landed at HBO, according to The Hollywood Reporter. The Star Wars director has written a spec script for an “intimate sci-fi fantasy drama” about a family which gets in a car crash, and then undergoes strange and mysterious events. Apple had shown interest, but Abrams’ happiness with Westworld convinced him to choose HBO.

Later that day, Neil Patrick Harris revealed that Netflix’s A Series of Unfortunate Events will end after three seasons. The show debuted last year to good reviews, with a second season due later this year, so it should get over by 2019 if there are no unexpected delays.

On Monday, we got to see tons of new film and TV show trailers thanks to the Super Bowl in the US, including Westworld season 2, Mission: Impossible – Fallout, and Avengers: Infinity War. Netflix went a step further and did a surprise release of The Cloverfield Paradox, but the film has been panned by critics. Later the same day, Lucasfilm gave us the first teaser trailer for Solo: A Star Wars Story.

On Tuesday, Lucasfilm announced that a new series of Star Wars films were in the works from Game of Thrones creators David Benioff and D.B. Weiss. They’ll write and produce the films, with work beginning after they finish the final Thrones season in 2019. Disney CEO Bob Iger also revealed that multiple Star Wars shows are in development for Disney’s upcoming streaming service.

The same day, FX provided a premiere date for the upcoming second season of Legion, the X-Men mutant mind-bending drama from Noah Hawley: April 3. Legion season 2 will have a total of 10 episodes, has a new villain, and picks up a year after the events of season 1.

On Wednesday, we were treated to a teaser trailer for Deadpool 2, which introduced the new anti-hero Cable (Josh Brolin), mocked the infamous Superman moustache removal in Justice League, and included a Toy Story parody plus the standard fourth-wall-breaking Deadpool commentary.

Netflix released the full-length trailer for Jessica Jones season 2 the same day, giving fans an idea of what they can expect from the Marvel superhero when she returns March 8 after a gap of over two years. Jones was part of The Defenders last year, but the miniseries didn’t have much room for personal subplots for any of the heroes.

On Thursday, Sony gave us our first peek at Venom, the Spider-Man spin-off starring Tom Hardy in the lead role. The teaser doesn’t actually show Hardy in the recognisable Venom avatar, though he does scream a lot and push things with his mind. Venom also stars Michelle Williams, Riz Ahmed, Scott Haze, Reid Scott and Jenny Slate. It’s out October 5.

According to Variety, Todd Phillips – the director of the Joker origin spin-off movie – is in talks with Joaquin Phoenix to play the character. The script called for a “possibly younger” actor, and for what it’s worth, Phoenix has three years on Jared Leto, who will reprise his role in Suicide Squad 2.

Reviving a reality show that was based on the stereotype that queer men have better tastes in matters of fashion, style, and grooming is an interesting choice in our times, when the debate about gender identity and sexuality is much more complex than it was then, and people are beginning to better understand what it means to be gay.

But critics feel that Queer Eye still has a place. The New York Times’ James Poniewozik said it’s “a formula, but damned if it doesn’t do the job and generate the tears, most of them happy”. Slate’s Willa Paskin called it “a tasty reality TV smoothie: part food show, part real estate show, part makeover show, part matchmaking show, part therapy, and sweet throughout”.

Movies:
Only the Brave
Josh Brolin (Avengers: Infinity War), Jeff Bridges (The Big Lebowski), and Miles Teller (Whiplash) are part of an ensemble cast in this biographical drama from Joseph Kosinski (Oblivion, Tron Legacy), based on the GQ article “No Exit” by Sean Flynn. It tells the true story of Granite Mountain Hotshots, a group of firefighters who fought an Arizona fire in 2013.

Written by Ken Nolan (Black Hawk Down) and Eric Warren Singer (American Hustle), Only the Brave focuses on the heroics of the firefighters, whose determination and sacrifice help protect families and communities. But the script stays away from sentimentality in honouring these working-class everyday heroes. It also stars Taylor Kitsch, James Badge Dale, Jennifer Connelly, and Alex Russell.

Most critics felt the film did a good job. Vulture’s Emily Yoshida said “Kosinski mostly pulls back on the macho cheerleading to find something more objective, and ultimately, deeply emotional”, while New Yorker’s Richard Brody remarked though it “offers fascinating insights into the practical exertions and bureaucratic complications of firefighting, it places much greater emphasis on the protagonists' personal lives”.

How to access: Amazon US, Amazon Video US, Google Play US, iTunes US, or YouTube US
Time commitment: 2 hours and 14 minutes

Other mentions:
If you’ve an Amazon Prime subscription, this has been a good week. The video service added Guillermo del Toro’s 2013 mechs-vs-monsters film Pacific Rim, which is due for a sequel next month, in addition to Spike Lee’s critically-acclaimed 2015 satirical musical drama Chi-Raq, Danny Boyle’s Trainspotting sequel, T2 Trainspotting; all 10 seasons of before-he-was-Superman Smallville, and all four seasons of stop-motion animated series Shaun the Sheep.

As for Netflix, in addition to the aforementioned Queer Eye, David Letterman’s monthly talk-show - My Next Guest Needs No Introduction - gets its second part and guest on Friday: George Clooney. For more Netflix picks, check out the full February list.

Video games:
Shadow of the Colossus
The PlayStation 2 classic comes to the PlayStation 4, with ultra-high definition assets designed from the ground up and the introduction of a new control scheme, improvements that are leading many to call it one of the best video game remakes ever made. On a regular PS4, it’ll run at 1080p 30fps, while a PS4 Pro can do 1440p (upscaled to 4K) at 30fps, or 60fps at 1080p.

The premise stays the same: you arrive in an ancient realm with a dead woman on your arm, where a voice in a cathedral tells you that you can gain the power of revival if you defeat 16 colossi imprisoned across the forsaken land. Shadow of the Colossus was noted for its long cut-scenes that pushed you to self-reflect and immerse in the world, and the higher fidelity of the PS4 remake only deepens those feelings.

Reviewers have been full of praise. Writing for Guardian, Keza MacDonald called its sense of scale “most impactful”, from “the immensity not only of its dramatic ruins and the sad, beautiful colossi, but of the task at hand, and its themes of death, faith, longing and the destructive selfishness of grief”. IGN’s Marty Sliva said it “remains one of the best PlayStation games ever made, and it’s wonderful that Sony has brought it back to the fore so a new generation of gamers can experience it without having to look past its aged façade”.

Civilization VI: Rise and Fall
Over a year on since release, Civilization VI got its first expansion earlier this week: Rise and Fall. It brings new choices, strategies, and challenges for players, with the biggest being the addition of Ages, which review your progress during an era and then grant you bonuses or penalties depending on your score.

Other new features include individual cities having loyalty to your role, with those further away from the capital being tougher to control, the introduction of Governors to influence loyalty, and various other mechanics that you can read about in our all-you-need-to-know. If you’ve spent hundreds of hours with the base game, Civ 6: Rise and Fall will help infuse some variety.

Reviews have been positive. Polygon’s Colin Campbell said Rise and Fall “is a recognition that the magic of this series is in giving players lots of choices - sometimes difficult choices - as we all strive to stamp our own personalities on what is a simulation of personal political leadership”, while GameSpot’s Kallie Plagge said it “enhances, rather than overcomplicates, systems that were already deep and layered to begin with, while introducing features that keep each game engaging from start to finish.”

How to access: Steam for PC
Time commitment: A lifetime, if you’re not careful

Dragon Quest Builders
Square Enix adds to its Nintendo Switch-port catalogue with Dragon Quest Builders, which originally released for the PS4 and PS Vita back in October 2016. A sequel is already in development, so if you don’t have a Sony console, this is the best time (and only way) to play the original before the new one arrives.

Based on a parallel ending of Dragon Quest, Builders begins with a hero accepting the evil Dragonlord’s suggestion, which turns out to be a trap. With the world now populated by monsters, a new hero – a Legendary Builder – rises to fix the world, rebuilding the realm of Alefgard from scratch.

Dragon Quest Builders for the Switch has been received well, with a green 81 score on reviews aggregator Metacritic, from over 30 critics. If you’ve been looking for a new Switch game, your search ends here.

Amazon Echo Speakers Will Be Available via Offline Retailers in India Starting Next Week
Xiaomi, Vivo, Oppo, Others to Use Qualcomm 5G Modem With First Devices Coming in 2019