6 Apps and Websites to Search Multiple Streaming Services at Once

With a proliferation of streaming services now available in India, it's not always easy to figure out what's available where. Sure, all Netflix originals such as Stranger Things and BoJack Horseman are obviously on Netflix, HBO shows from Game of Thrones to Curb Your Enthusiasm can be found on Hotstar, and Amazon is great for… an all-male lineup of stand-up comedy originals.

But if you're looking for a random film or TV show – say, Tom Cruise's Mission: Impossible – it's not as obvious. Having to open every app and manually search can be a chore, and that's not what anyone wants to be doing with their time. Thankfully, there are a few services that search across the various catalogues, and help find what you're looking for.

So if you wish to spend more time watching and less time racking your brain, here's what you should be using.

1. JustWatch
Of all the options on this list, JustWatch is best for those of us in India, as it supports the prominent streaming platforms in the country: Netflix, Amazon Prime Video, and Hotstar. On top of that, it also looks through iTunes, Google Play, Voot, Hooq, Mubi, and GuideDoc. JustWatch is available via its website – make sure the URL says justwatch.com/in - or the app, for both Android and iOS. Using the app, you can simply tap on the different viewing options it shows in its search results to launch the appropriate application.

Better yet, JustWatch allows you to tweak various filters, so you can narrow down the glut of content available everywhere. You can choose from movies or TV shows, and set release year, genres, price, and rating. The last of those supports both IMDb and Rotten Tomatoes, if you were curious.

You can even make a watchlist, but that requires a free account. JustWatch is available in a total of 31 countries, including the US, the UK, Canada, Australia, and New Zealand. 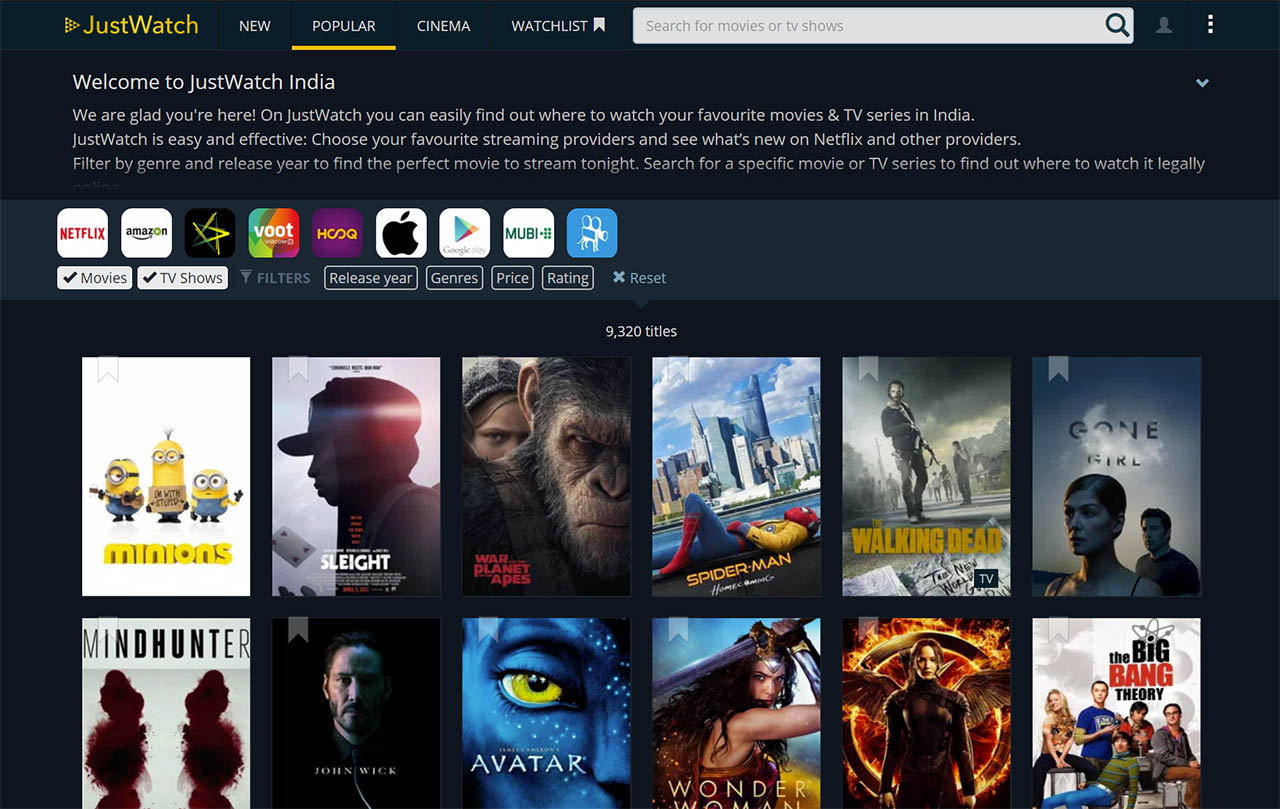 2. GoWatchIt
For readers in the US, GoWatchIt is a great alternative to JustWatch as it has an even longer list of streaming providers, including YouTube, and some lesser-known ones such as Tribeca Shortlist, and Dox. On top of that, GoWatchIt also looks at physical retailers, so it's great for those who still prefer buying Blu-rays of their beloved movies and TV shows now and then.

And it's got an option for TV tune-in, so you can help set a reminder for when the next episode airs. You'll need to set up a free GoWatchIt account to get those notifications, though. GoWatchIt has apps for both Android and iOS too, though they're a far cry from the website's pleasing look. 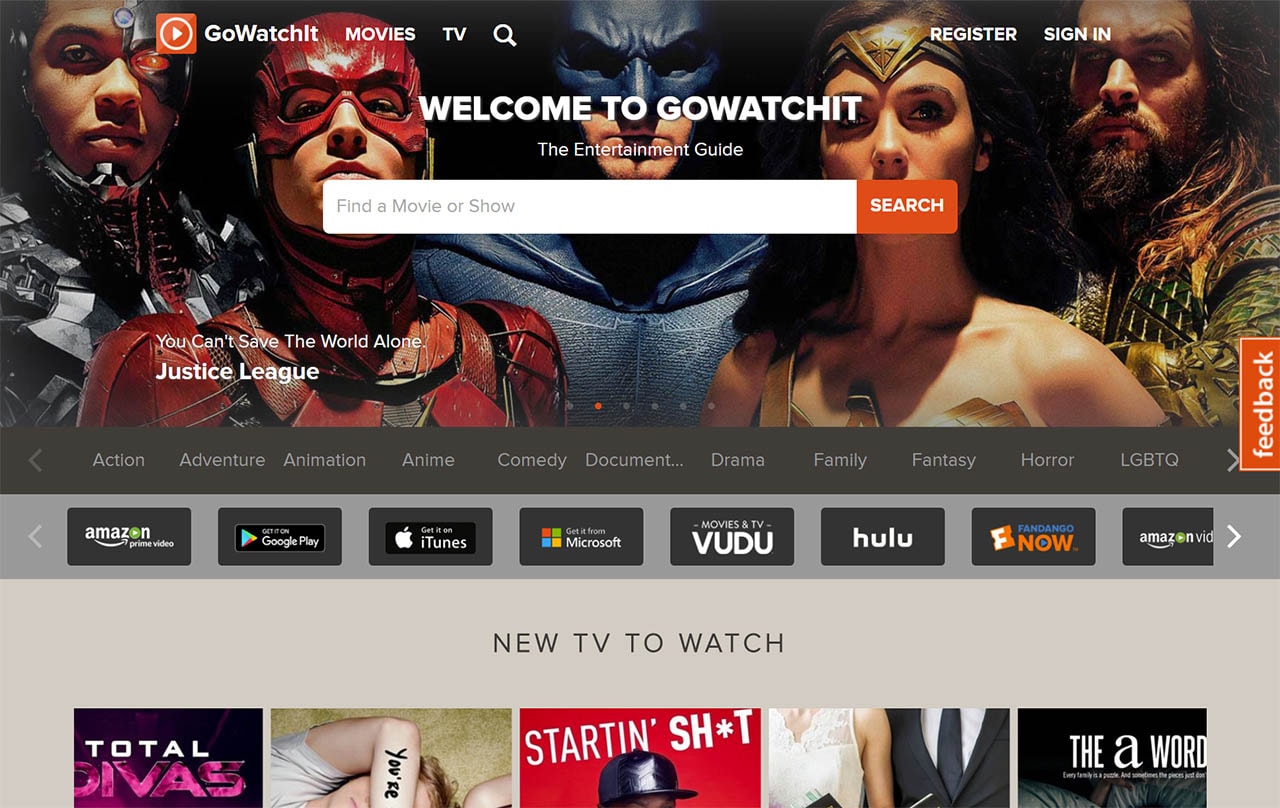 3. Yahoo Video Guide
Another US-only option is the Yahoo Video Guide, available on Android and iOS, which has the best look of all the apps listed here. It's heavy on cover art, and even makes use of short videos to highlight popular series. You can search across a total of 30 providers, with the app helping you easily pick the ones already installed on your phone.

Yahoo Video Guide's most fun feature is its Mood Picker. Here's how it works: pick a GIF from available options, such as "Winter Soldier looking at a car blowing up" (Action) or "Dragon setting fire to everything" (Fantasy), and then the app suggests relevant titles. You can select multiple GIFs too, and Video Guide then narrows down accordingly. 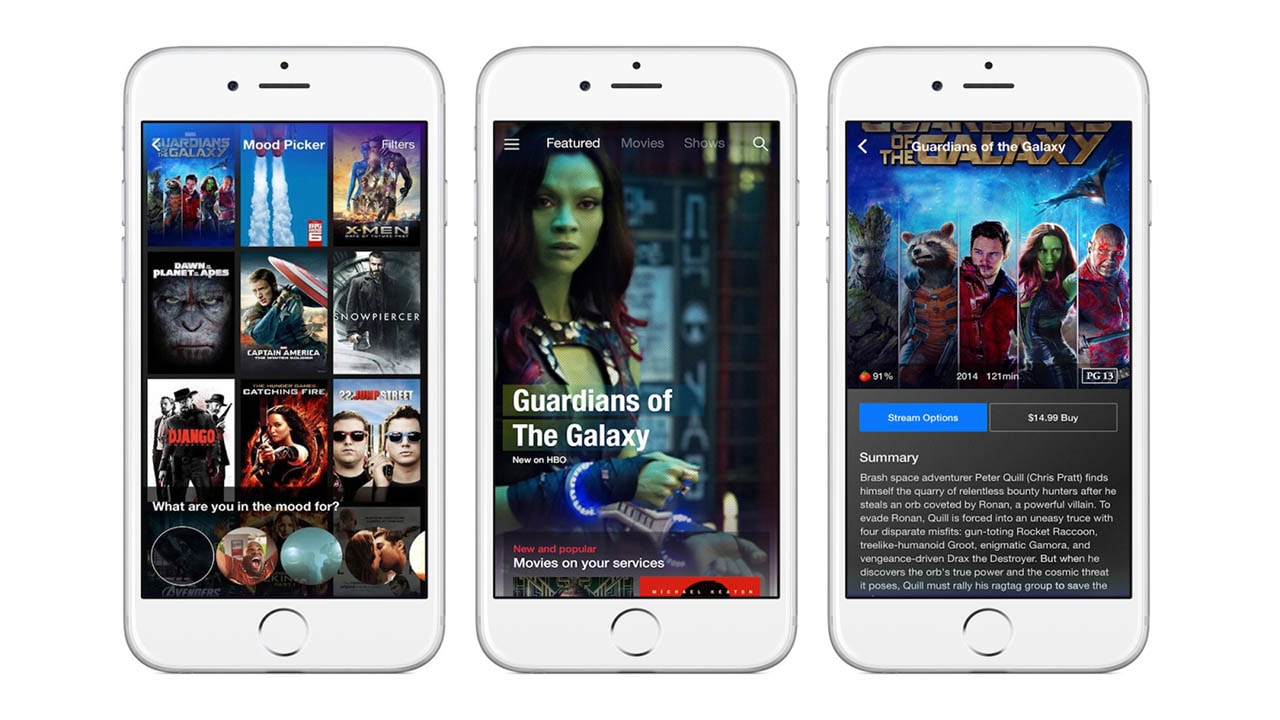 4. Stremio
You can take things one step further with Stremio, which not only searches catalogues of different services, but also supports playing (some) content directly in its app. You can either watch on your Android and iOS device, or send content over to a Chromecast / smart TV that's connected on the same Wi-Fi network. It searches through a large (but mostly US-centric) list of content providers, though it doesn't include Hotstar right now.

Stremio's provider list supports add-ons, so you can add stores that you don't see at first. This includes some free indie movie platforms, and some free regional providers. Stremio has also become popular for the ability to install add-ons that hook onto torrent sites – a bit like the short-lived sensation Popcorn Time – though this is definitely something we do not condone. 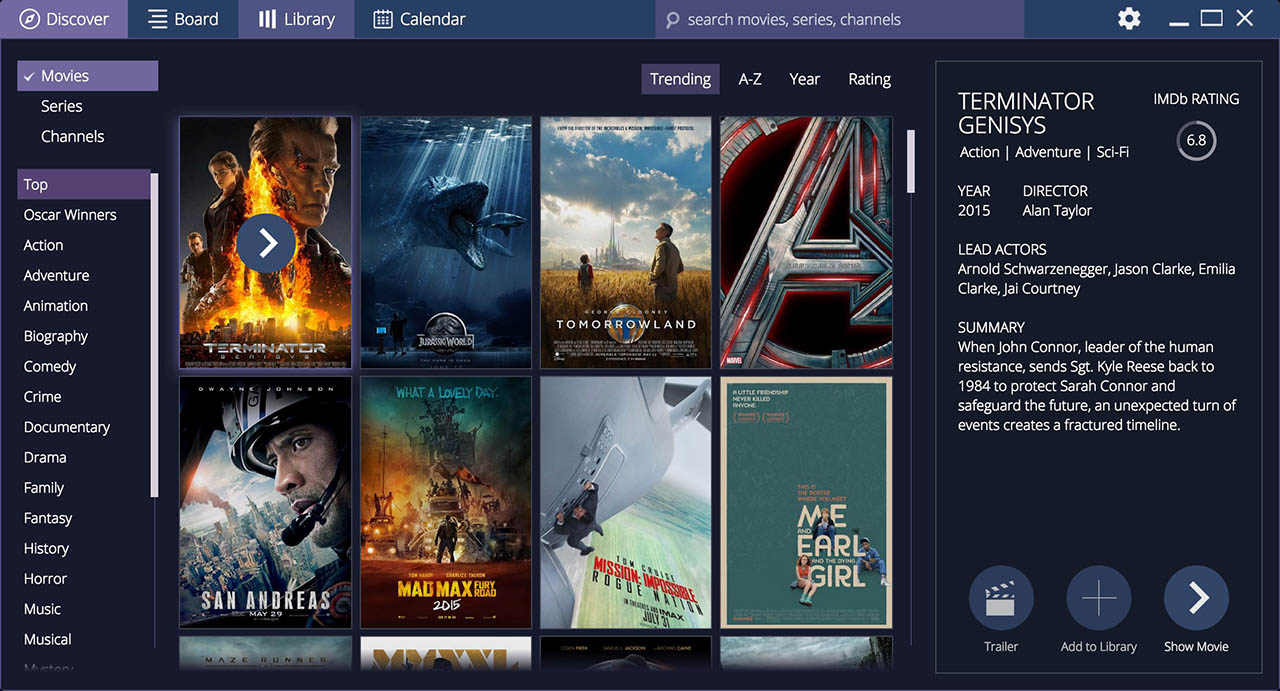 5. uNoGS / AllFlicks
For the Netflix buffs with a fast, working VPN, uNoGS - short for Unofficial Netflix Online Global Search – is a great resource. It lets you search across 17 different Netflix regions (it used to be a lot more), and you can easily see what's been added recently or what's leaving soon at a glance. If you want a better UI, AllFlicks does the same job, albeit with ads in places.

AllFlicks provides a more comprehensive list when it comes to departing titles, from the time we've spent with both websites. uNoGS' search parameters are more extensive, with the option to filter by IMDb rating, audio and subtitle in addition to AllFlicks' genre, type, and release year. 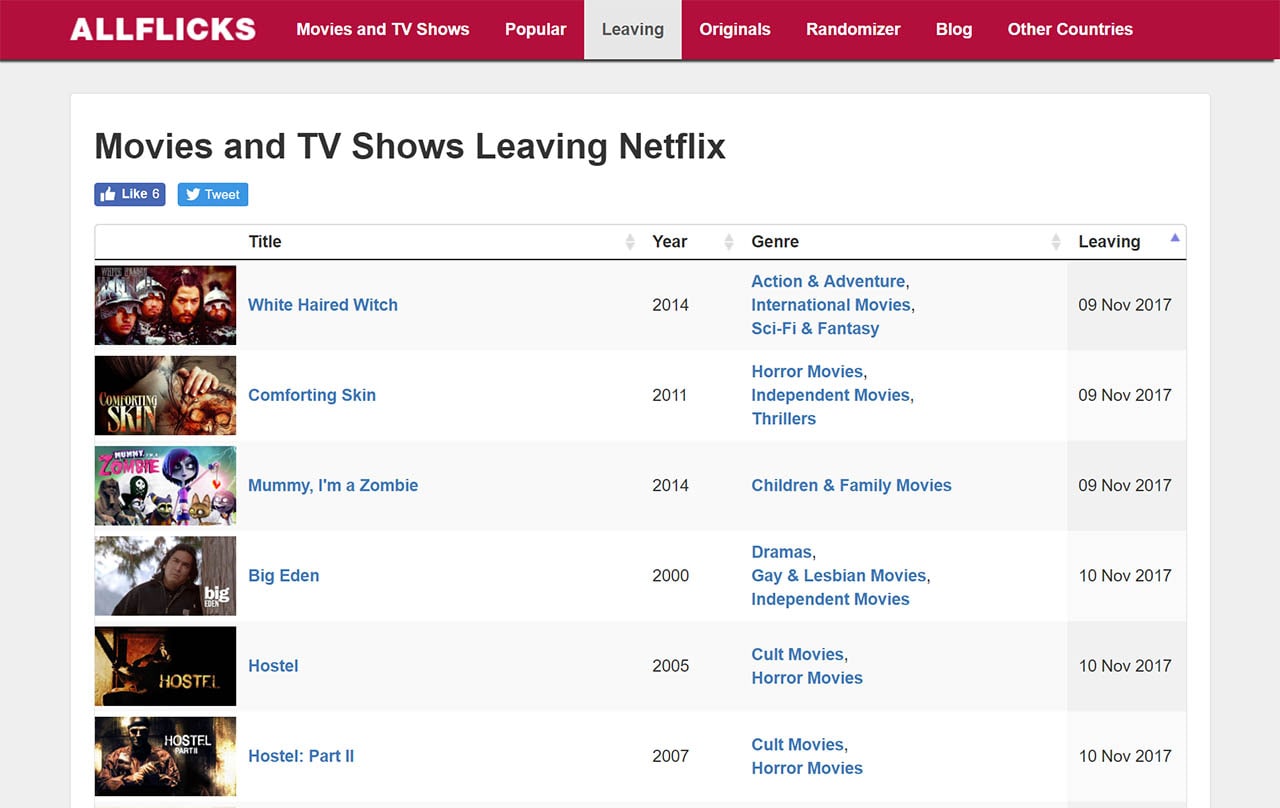 6. Sensy / Peel
Sensy and Peel (Android, iOS) aren't the same as the other options on this list, because they are made for live TV. If you're tired of browsing your DTH listings to find content for you, Sensy and Peel can be quite helpful. You can search by title name, genre, actor, or even channel name. Since Sensy is designed for India, it works better if you watch a lot of local content. Both Sensy and Peel provide recommendations based on what you like or what you watch, and you can set notifications for TV tune-in.

If you've got a phone with an IR blaster, Sensy and Peel will even change channels for you. For those who don't have an IR blaster but still want the ease of switching channels with their voice, Sensy has a Bluetooth-enabled accessory called Sensy Home, which does the work for you. Peel, on the other hand, can connect to Wi-Fi-enabled smart TVs. 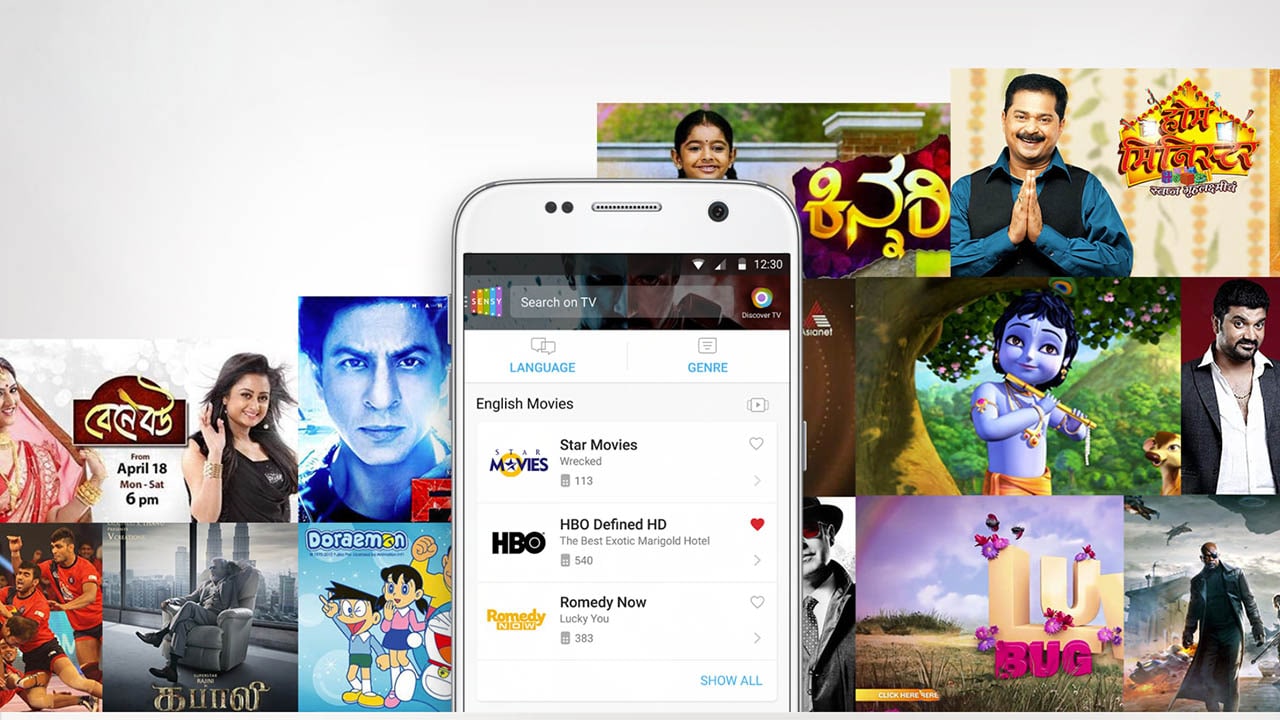 While the seven apps and services above cover most of the streaming services and live TV, there are still gaps in the market. The likes of JioCinema, Airtel Movies, and Sony Liv aren't searchable by third parties, which is likely due to the lack of an API.

What platforms do you use for your entertainment? Do you've any questions? Share them via the comments below, and we'll do our best to answer them.

Further reading: Netflix, Amazon Prime Video, Hotstar, Streaming Services, Universal search, iTunes, Google Play, Voot, Hooq, Yahoo
Akhil Arora Email Akhil
Akhil Arora covers entertainment for Gadgets 360, interviewing stars such as Christian Bale and Anurag Kashyap, covering series premieres, product and service launches across the globe, and looking at American blockbusters and Indian dramas from a global socio-political and feminist perspective. As a Rotten Tomatoes-certified film critic, Akhil has reviewed over 150 movies and TV shows in over half a decade at Gadgets 360. When he is not completely caught up with new film and TV releases, Akhil ...More
Intel to Develop Discrete GPUs for Gaming and AI, Hires Former AMD Radeon Chief Raja Koduri
Singles' Day: Everything You Need to Know About Shopping From China