Rogue One: A Star Wars Story - This Time With Spoilers

Rogue One – the first standalone anthology film in the Star Wars universe – opens with those famous words in blue text: “A long time ago in a galaxy far, far away....” But unlike the seven films that have come before it, this isn’t immediately followed by the iconic text crawl in yellow. Instead, Lucasfilm and Disney’s latest adventure, which is grittier, darker and more realistic than any of its counterparts, cuts directly to the chase.

That’s the least of what's changed with Rogue One. The film is also the first to not revolve around the Skywalker family, it doesn't prominently feature the Jedi in some form, or focus on tons of space battles. In some ways, it’s a bold step for Disney, post-acquiring Lucasfilm in 2012, to rest a film on completely unknown characters, peppered with a few body-double and computer-generated performances for characters of yesteryear.

Rogue One benefits from not having to generate its own sense of gravitas, as (most of) the audience is already well too aware of the Death Star’s capabilities. It amplifies the nostalgia by not just bringing in characters but also locales, attire, and the look and feel of Star Wars, be it C-3PO and R2-D2 in a single shot, the Rebel base on Yavin IV, or the Red, Blue and Gold Squadrons that fought bravely in the Battle of Yavin.

It largely succeeds in writing a new chapter, more so in its latter half as we noted in our spoiler-free review of the film last week. Now that people have seen it, we decided it was time to discuss Rogue One in detail – from its technological advances, cameo appearances, and what it brings to the larger Star Wars cinematic universe. Seriously though, there are a lot of spoilers below, so stop now if you care about that sort of thing.

(Warning: major spoilers below for Rogue One: A Star Wars Story.) 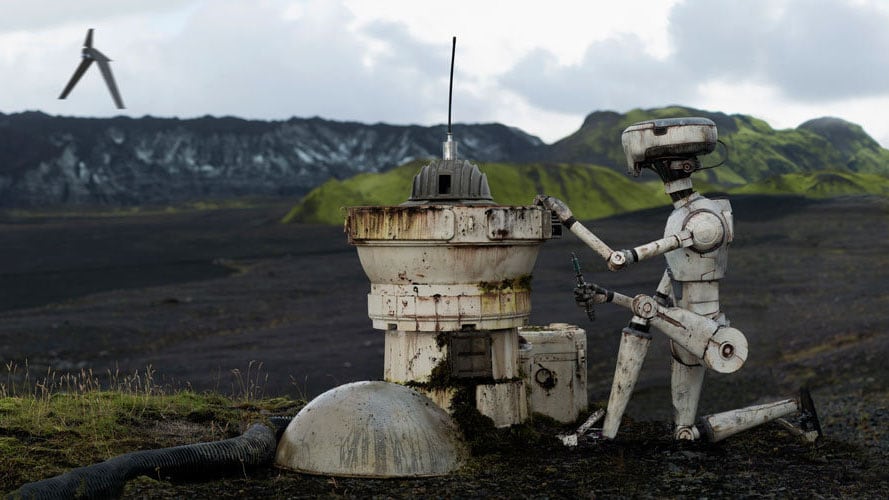 Rogue One’s first half
We mentioned in our review of the film last week that Rogue One has trouble finding pace during its first hour, as it hops planet after planet – from the Ersos’ home on Lah'mu, following Cassian Andor at the Rings of Kafrene trading post, introducing K-2SO on Wobani, Bodhi Rook’s defection on Jedha to see Saw Gerrera, Jyn brought to Rebel base Yavin IV, back to Jedha as Jyn, Cassian and K-2SO travel together, and then onto Eadu where Galen Erso’s research facility is. Though this conveys the scale of Star Wars, the sequences within are unable to truly deliver given they are pressed for time, except for the first one with a young Jyn Erso.

Cassian’s introduction as someone who regularly has to get his hands dirty, and K-2SO and the Rebels’ rescue of Jyn on Wobani feel like late additions to the film, meant to bring in characters earlier than they would otherwise have been seen – likely on Yavin IV. Rogue One fails to capture attention or deliver crucial pay-offs until the motley crew make their way to Eadu, which is when things really start to click. Without those vital emotional peaks, the film feels detached – and it’s hard to take it seriously.

The same goes for character arcs too. Early scenes with Cassian – when he shoots someone in the back, and his talk with General Draven – convey the sense that he’s having reservations about continuing with the Rebels. Bodhi Rook has trouble remembering after Saw Gerrera unleashes a thought-identifying alien octopus on him, but he becomes himself soon after. And then there’s Baze Malbus, whose role looks like it's been shortened along the way, reducing him to a foil for Chirrut Îmwe.

The CGI-enabled performances
Since the events of Rogue One take place immediately prior to those of Episode IV: A New Hope, director Gareth Edwards wanted to draw on imagery and characters that would help sell his film’s setting. For the former, he was lucky enough to find unused footage shot for the original film by George Lucas. Most of it gets used to represent the pilots of X-wing and Y-wing Starfighters in the latter third of Rogue One. As for the characters, in one case that meant dredging up an actor from the dead – not literally, of course – by way of a computer-generated performance. Guy Henry, part of BBC’s Holby City, played the part of Grand Moff Tarkin in Rogue One. The original actor, Peter Cushing, passed away in 1994 – and his likeness was then replaced in post-production by the artists of Industrial Light & Magic. The same technique was also used to present a young Princess Leia towards the end of the film, for which Norwegian actress Ingvild Deila was cast to play the part.

But while the latter only appears for the briefest of glimpses, Tarkin is there for a substantial portion of the Imperial scenes. And it makes sense too – Cushing’s character was the commander of the Death Star in the first Star Wars film, and a film about the Death Star plans would naturally play into that.

This is far from the first time this has been done. Multiple US Presidents were recreated for Forrest Gump in 1994, The Social Network used two different actors for the Winklevoss twins, and VFX artists had to do more of the same with Paul Walker in Furious 7, after the actor perished in a car accident. Hollywood has used similar practices to make younger versions of actors, be it Robert Downey Jr. in Captain America: Civil War, Anthony Hopkins in Westworld, or Jeff Bridges in Tron: Legacy.

While it’s commendable that ILM was able to recreate Tarkin, what does it mean for the actors? Could this be used to bring back actors who refuse to sign onto more sequels in the future? And what about the image rights of the deceased? Going forward, as technology keeps getting better, these questions will only gain more relevance.

The reshoots and the cut footage
When Rogue One underwent “pre-scheduled reshoots” back in June, reports said that the changes weren’t extensive. But that seems to have rather been an understatement, considering much of what we were given as part of the first teaser trailer in April hardly made it into the film’s final cut. That includes all the dialogue lines – including the divisive “I rebel” spoken by Felicity Jones, Mon Mothma referring to Jyn's past, and Saw Gerrera chiming in about the terrors of the Empire.

And even some of the action sequences seem to have been cut. In the film, Jyn takes the Death Star plans to the top of the Citadel but the first trailer shows Jyn, Cassian and K-2SO running through the Imperial base and the beach (with AT-ACTs in the background) with the plans. That suggests that K-2SO didn’t heroically sacrifice himself in an earlier cut, the crew were unable to transmit the plans to the Alliance starships and had to figure out an alternative exit route. On top of all that, there’s the cool shot of Jyn in Imperial armour (above) with the lights coming to life, which never made it into the film.

The second trailer, released in October, fares much better in those terms. While most lines are present in the film audiences will see in theatres, the trailer’s soundtrack still sounds much more optimistic than the final film, which is grittier and gloomier. And even ten days before the film’s release, a TV spot contained shots of Jyn and Cassian running on the beach with the plans.

Here is a list of all the other scenes that went missing from the finished film:

Star Wars loyalists will still see the film anyway, but what does it say about the practice of selling footage and tone that are nowhere near the film’s truth? 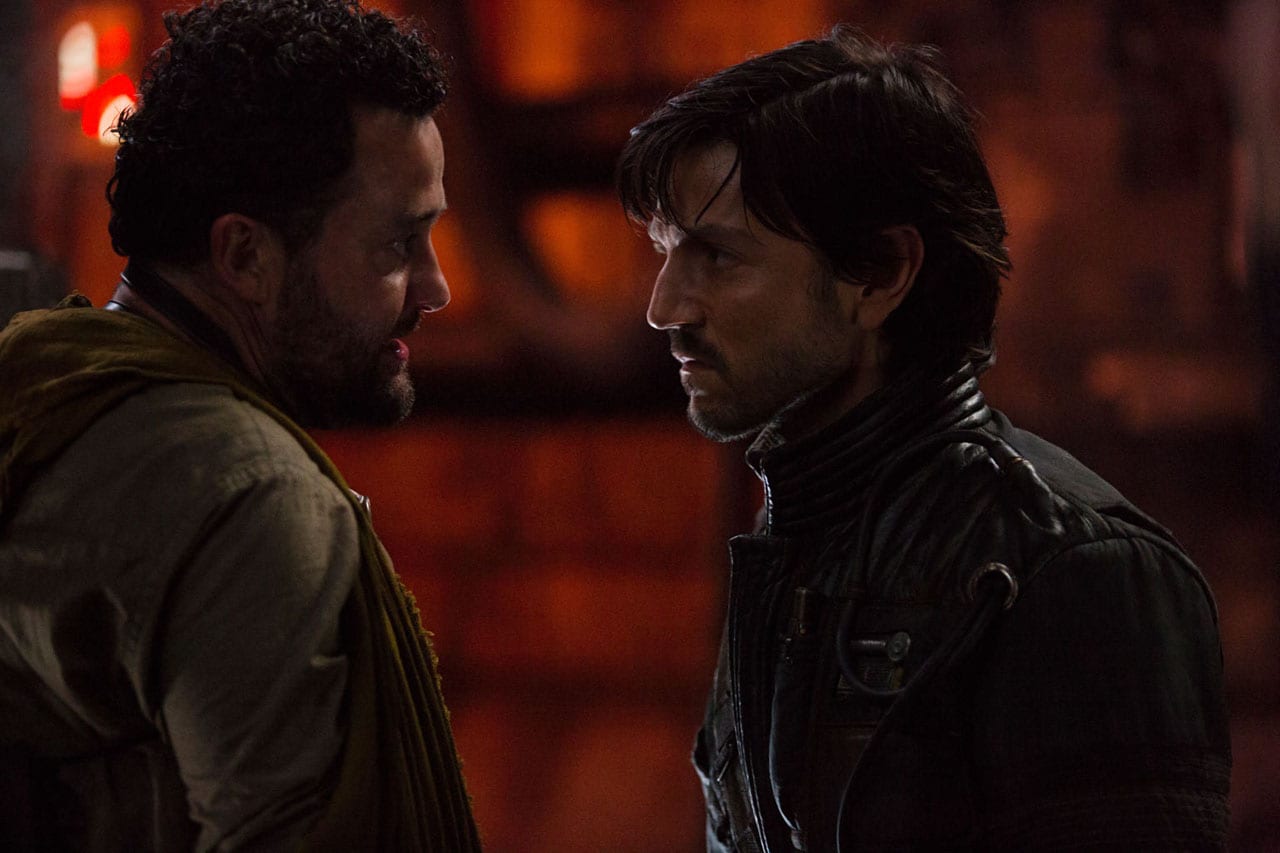 The gloomy, sombre tone of Rogue One
Rogue One is a gritty, realistic, and mature take on Lucas’ universe, even more so than Episode V: The Empire Strikes Back. That tone is set right from its opening sequence, when Krennic's troopers mow down Lyra Erso, Jyn’s mother. It continues with our second protagonist – Cassian Andor – shooting someone in the back, and the Rebel Alliance sanctioning a kill-on-sight order for Galen Erso, while keeping said info away from Jyn.

And things don’t get any better. Where Star Wars films traditionally provide some cheer to balance the dark tidings, Rogue One simply slides into murkier areas as we move forward, be it blowing Jedha City to smithereens, Alliance factions bickering amidst fear of the Empire’s wrath, or killing off all its principal cast by the end of the film. If anything, this standalone spin-off story is definitely not for the young ones.

That doesn’t mean the writers’ decisions always work on-screen, especially in the case of the deaths. While it’s understandable that there are heavy casualties in war, it makes no sense that there’s a master switch in the middle of the beach – which is what leads to Chirrut Îmwe’s demise, and in turn Baze Malbus’. Bodhi Rook falls victim to a random grenade tossed into their starship, and Cassian returns from what seemed like a fatal fall. K-2SO was the only one whose death had an emotional impact – owing to how Alan Tudyk managed to create a personality for the droid – as he suffers one too many blaster shots from Stormtroopers and goes out in a heroic fashion after ensuring Jyn and Cassian’s safety.

Rogue One’s final half hour, and Disney’s gamble
Even with all of its above misfires, Rogue One is at times a captivating watch. We’ve seen it twice now, and the third act – after the ragtag band of survivors leave for Scarif – mostly hits the right notes. It benefits from the presence of Darth Vader too, whose sequence towards the end of the film – the only one with a lightsaber in the new film – is both frightening and enthralling, as he moves through a dozen Rebel soldiers with ease.

Rogue One is a brave and interesting addition to Star Wars lore, in that it’s super-bleak from the beginning, and our protagonists aren’t classic heroes like Luke Skywalker in 1977’s Star Wars. Instead, all of them are survivors, the ones you’d usually find in the background, separated from the main heroics. 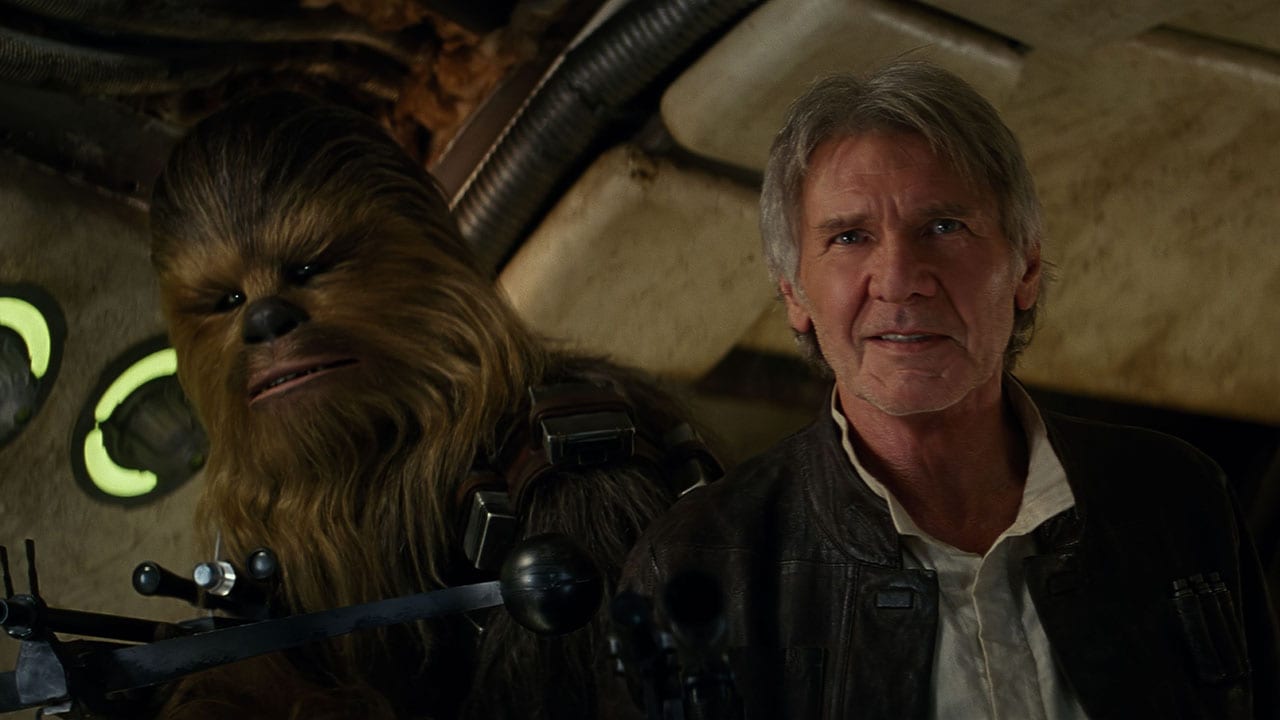 Its place in the Star Wars timeline, right before Episode IV, somewhat represents a gamble. Rogue One is unlikely to bring in new people into the fandom, and despite Lucasfilm president Kathleen Kennedy’s assertions, it could never serve as the entry point for a new Star Wars fan – something last year’s The Force Awakens well did. The last shot of Rogue One – that of a young Princess Leia – would make zero sense to someone who isn’t already acquainted with the characters.

Unlike its own sister entity Marvel, Disney is catering to two overlapping yet different sets of audiences with Lucasfilm. Where a new trilogy continues the story into the future – Episode VIII with Rey, Finn, and Kylo Ren lands in theatres next December – its standalone stories will truly stand alone. Jyn Erso cannot possibly be the mother of Rey unlike rumoured, and there is no mention let alone hint of Supreme Leader Snoke’s true identity.

We already know that a Han Solo film – from Lego Movie directors Phil Lord and Christopher Miller, with Alden Ehrenreich portraying a younger Han Solo, and Donald Glover as a young Lando Calrissian – will arrive in May 2018. And there’s already talk of Boba Fett, Yoda, or Obi-Wan Kenobi films. Star Wars is headed down a different route compared to other cinematic universes, and Rogue One’s early success – it made $290 million (approximately Rs. 1,970 crores) worldwide on first weekend alone – points to it being a successful approach.

Rogue One: A Star Wars Story - This Time With Spoilers
Comment