A few years ago, when Netflix was only available in a handful of countries, it would launch shows in half a dozen languages. By contrast, its newest superhero tale Iron Fist released earlier this month in 20 languages, powered by 572 language assets, including subtitles, audio dubs, and audio descriptions.

That, of course, is a direct consequence of being available in over 190 countries, whose requirements and tastes vary across language, genre, data speeds, device, and even length. Not as much by region though, according to Todd Yellin, VP product innovation at Netflix.

“What we learned over the last year, that it doesn't matter where they live as much as you'd think,” Yellin told Gadgets 360 and other reporters during an event at Netflix’s headquarters in Los Gatos last week. “Tastes are a lot more global than you'd imagine.” Earlier, what Netflix used to do was have a different algorithm for say, Germany, Japan, and the US. But through analysis of data, it realised that while your next-door neighbour might have very different tastes from you, someone living thousands of miles away in a different continent likes the same TV show as you do.

In view of that, Netflix made a global algorithm. The company’s reliance on hard numbers extends to virtually everything it tries. For new features, it continually engages in A/B testing, and then decides based on the evidence in front of it. That’s how the user profile screen came three and a half years ago, and that’s how Netflix chose the new thumbs rating system that will be rolling out next month.

One step away from OkCupid
The aggregated ratings – usually visible under the title name – will be replaced by a percent match, which shows how closely it hews to your current tastes. “Think of Netflix as a dating service,” Yellin remarked. “We want to fix you guys up with movies and TV shows that you will love.” If Netflix thinks you have a 55 percent match or better with a show or movie, it will show the percentage number. If the number is lower, it won't show up on the UI.

Yellin says this is a better system than relying on the older star ratings. "What he says he wants, and what he actually wants,” Yellin added, pointing at a reporter, “could be two different things. People, if you ask them, they want everything. But we [at Netflix] want simplicity.” 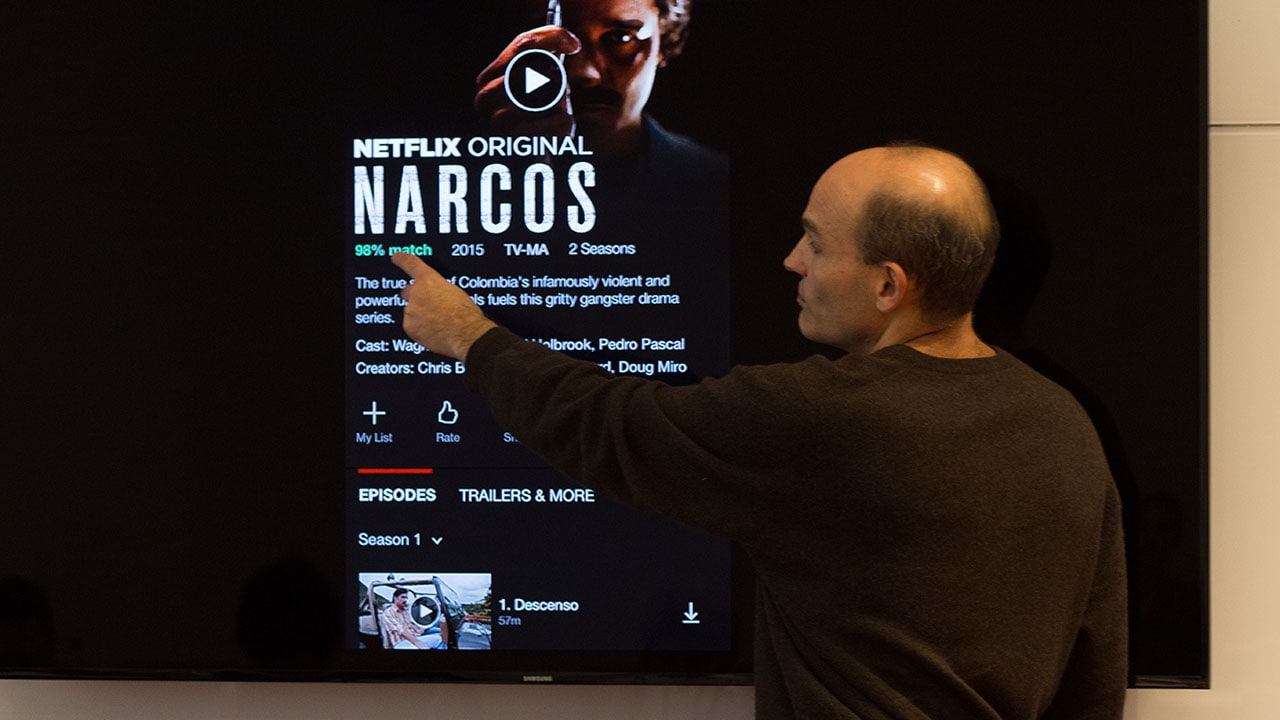 Todd Yellin points to how the new percent match feature will be displayed to users
Photo Credit: Netflix

Another feature that it tested recently is replacing the slideshow that you see when you select a title on the home screen with a short video. Internally, that’s been tweaked for years to ensure it worked properly for everyone always – it had to come up within a second – and have a fall-back. But that wasn’t feasible until now.

Moving forward, Netflix is going to bring more video than still images, Yellin noted. This will be more so on TV, as it affords a bigger landscape to play with, and 70 percent of Netflix viewing still happens in the living room. Admittedly, that trend doesn’t hold in Asian markets, such as India, Japan, and South Korea, where the hours spent on smartphone and tablets is higher than that on TV.

When it comes to content recommendation, Netflix looks at your likes from the time you signed up, the titles you bother to rate, and much more importantly – what you watch, and how much you watch it. Shifting from a five-star rating system to a binary option – thumbs up or thumbs down – is again part of that, as Yellin believes what you say with thumbs is a lot more relevant than what you say with stars. While viewers may rate shows such as The West Wing higher than Adam Sandler movies, more of them watch the latter, or watch it for longer.

What’s ‘Demogorgon’ in Arabic?
Interestingly, the recommendation engine is also used to find what content its translators will be good at doing. As Netflix has expanded on the originals front, it had to build out its localisation squad on a similar scale, explained Dennis Sheehan, director of content localisation and quality control at Netflix. The streaming service hit its peak challenge in terms of operational and time scale with the talk-show Chelsea, presented by comedian Chelsea Handler.

Each episode of the ninety-episode first season was shot at 2pm, and would go up by midnight the following day. That meant Sheehan and his team had less than 36 hours to provide subtitles and audio dubs, while still having to maintain their own quality standards. To achieve that, Netflix decided to work directly with the translators instead of third-party vendors.

"With Chelsea, we wanted to make sure the localised assets reflected her voice," Sheehan told reporters in Los Gatos. By working directly with translators, Netflix could provide context. "If [the translators] had questions regarding a meme, they could reach out directly to us, and we could make sure they articulate it correctly," he added.

The challenges with localisation can be quite varied, Sheehan noted. Take one of Netflix’s latest original sitcoms – One Day at a Time – set around a Cuban-American family in the current day. In one of the early episodes, Lydia (Rita Moreno) and her granddaughter Elena (Isabella Gomez) are arguing over their respective gaps in language proficiency, in English and Spanish. The scene relies on its bilingual aspect to earn most of its laughs. 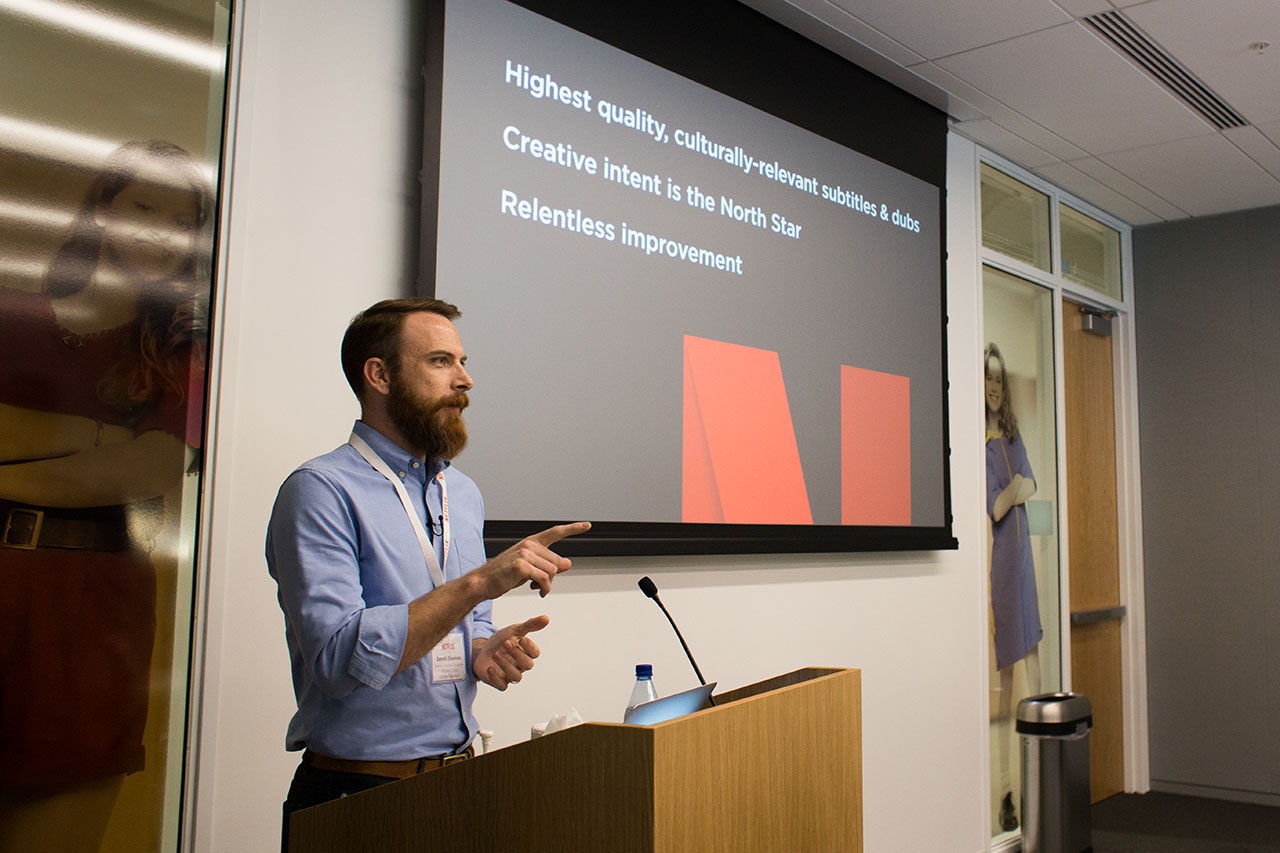 A Spanish dub had to be entirely in, well, Spanish. But, "you'd lose all the nuance of the Spanish to English jokes between the grandmother and the granddaughter," Sheehan remarked. So, the approach it took was that Elena spoke in Spanish, and Netflix got someone with a Cuban dialect to do the voice for Lydia.

Then there’s House of Cards, which frequently includes names of cabinet positions in the US government, such as ‘Secretary of State’, or ‘House Speaker’. Translating those literally would destroy all meaning, so you must find the correct parallel in that country. And such peculiarities exist in tons of places, which has prompted Netflix to create its own internal Wiki.

The messenger of gods
The biggest challenge remains finding the right people. And as Netflix’s content continues to inflate – it will spend $6 billion (about Rs. 39,225 crores) this year alone – it’s become even more important to know whom to trust. That’s why the company has invested in creating what it claims is the first industry-standardised test developed by a content owner. It’s called Hermes, named after the messenger of the Greek gods.

The testing and indexing tool is a bit like SAT and TOEFL, Netflix’s director of content partner operations, Chris Fetner explained to us. It has a total of five rounds that involve multiple-choice rounds of text-to-text translation, and a final round that has you translate what characters speak on screen, much like the real job. It then assigns you a score out of 100, which allows Netflix to easily find the best people. The reliance on data reflects Netflix’s approach as a company, which felt the existing practises of the translators’ world were very anecdotal.

Fetner said that the top 10 percentile in any language qualify for the task. Hermes is now open to everyone after being in beta for the last three months. You can register your interest to do subtitling and dubbing work even as an independent entity, and Netflix will reach out if your score is good enough. Languages such as Hindi are also part of the test, even though those languages aren’t yet available on Netflix.

Even though Netflix has been available across the globe – except China, Syria, and North Korea – for over a year now, it’s still early days, CEO Reed Hastings admitted. “We will add 2-3 languages each year,” he said, and pointed to the likes of Romanian, Greek, and Polish as some of their next targets. YouTube, he said, is available in close to 45 languages, so “we’ve got many ways to go from the 20 we’re at”.

Disclosure: Netflix sponsored the correspondent's flights and hotel for the event in Los Gatos.

Further reading: Netflix, Chelsea, House of Cards, One Day at a Time, Hermes
Akhil Arora Email Akhil
Akhil Arora covers entertainment for Gadgets 360, interviewing stars such as Christian Bale and Anurag Kashyap, covering series premieres, product and service launches across the globe, and looking at American blockbusters and Indian dramas from a global socio-political and feminist perspective. As a Rotten Tomatoes-certified film critic, Akhil has reviewed over 150 movies and TV shows in over half a decade at Gadgets 360. When he is not completely caught up with new film and TV releases, Akhil ...More
Google Play Store Safer Than Ever but About Half of Android Devices Didn't Receive an Update in 2016
Airbnb to Double Investment in China, Adopt New Name