Why Netflix Doesn’t Have a Hindi or Tamil Interface Yet

The various personalised thumbnails created by Netflix for 'Lost in Space'

Personalisation is key to most services on the Internet, but it's even more crucial for video streaming services, considering the sheer breadth of the content catalogue — with thousands of films, TV shows and documentaries — at the disposal for the biggest ones. Most of them, be it Netflix, Amazon Prime Video or Hotstar, have been doing this for a while now (with different degrees of success) and it's why your home page looks starkly different than your mom's, your friend's, or even your partner's.

But Netflix has been going further than that for the past couple of years now by offering personalised thumbnails. While the artwork for any piece of content on all other streaming services is a static image, the one you see on Netflix is dependent on your viewing tastes. That invites a whole host of new questions, chief of which are: Why am I getting the thumbnail that I see? And how does Netflix decide which one to show the very first time I interact with new content?

This is (partly) the job of Elizabeth Goldstein, Netflix's director of product creative for EMEA and Latin America. At the sidelines of a Netflix event in Los Angeles last month, Goldstein explained that part of the answer is that Netflix is always testing with small, randomised groups so “we can pivot when new audiences come in or when something happens on social media”, but that largely, most people get a personalised image.

“[As for the other thing], because you haven't interacted with a show yet, you're getting images that other people, who like similar things that you like to watch, liked,” Goldstein added. “And they interacted with. So, the algorithm is taking a guess that you would also like that.

“The other thing about the algorithm is that it's completely blind. It doesn't know what image it's showing you. It's just saying, ‘Image number two, this person over here liked it. They have very similar viewing, so image number two goes to you.' So it doesn't know if it's a main character, secondary character, or a picture of an environment. It has no idea.” 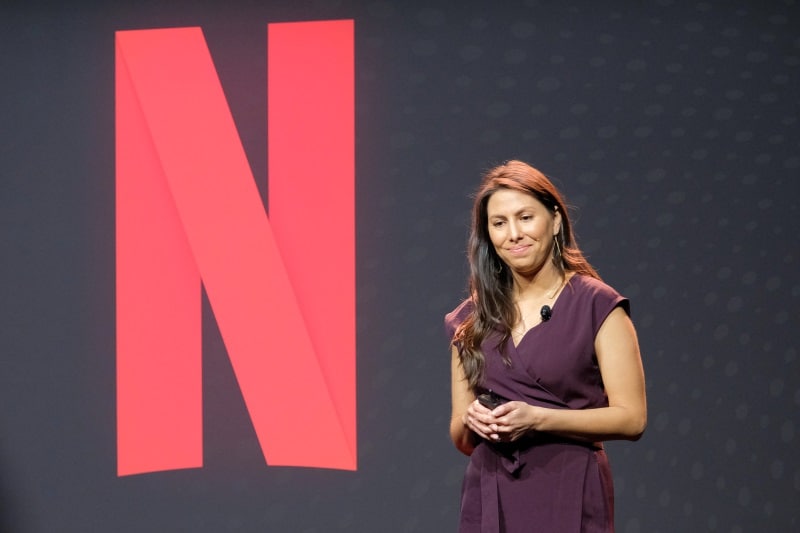 Though the algorithm doesn't have any eyes, that's certainly not the case for Goldstein & Co. Does Netflix know which particular colours, designs or types of faces tend to play better — or worse?

“That's something we're trying to dig into more,” Goldstein explained. “Right now, we don't necessarily know why. It could be that it's orange and all the other boxes around it were a darker colour that day. It could be that that character is really well-known, and on social, people are really talking about him. It's like there's so many different factors, that maybe, it was a really cute puppy. [...] But we don't sit down and go, 'Cute puppies always work.'”

What Netflix does do instead, Goldstein noted, is that they try to learn from past seasons for future ones: “If a certain character really resonated, we'll make sure to include that image in the next season but we're still going to test multiple other images because maybe there's a new audience that really loves the love aspect of the story. So that's how we take the learnings but we're not so programmatic as like orange is the colour that we're going to go with wherever more.”

Her team takes the same cautious approach with thumbnails that aren't working, as well. On Netflix's recent medieval Korean drama Kingdom, the one with the zombies was the most common amongst members worldwide. But that could change in a month or two, Goldstein said.

“Let's say I got rid of all the other images,” she added. “I could be losing out on an image that would resonate with a new audience two months, a year, three years down the line. So we don't try to parse the information like that. We're not like, ‘This is the winner and this is a loser.' As long as we feel like it's authentic, we're going to keep it up there and maybe one day it'll [work].” 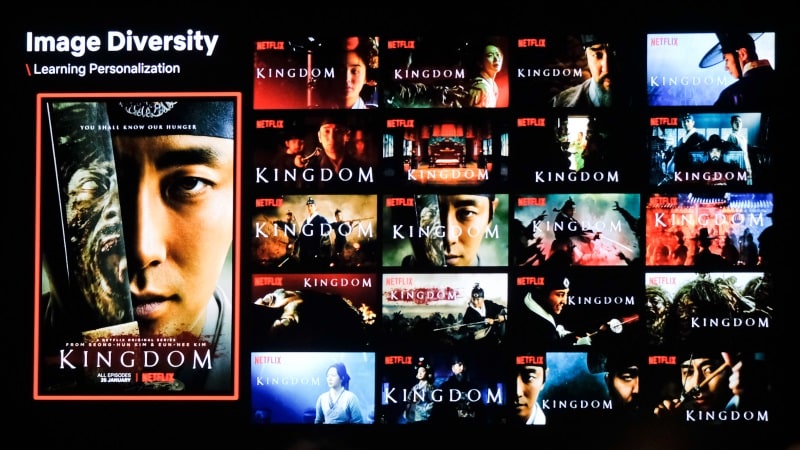 The last image in the fourth row/column was the most popular. Who would have thought?
Photo Credit: Adam Rose/Netflix

Why Netflix doesn't have a Hindi interface yet

While personalised thumbnails are a task that Netflix invited on itself, the other big challenge is simply a by-product of its global reach: localisation. Netflix is available in 190 countries and territories, and that means its members speak tons of different languages. And with Netflix recently diving into interactive content, first with Black Mirror: Bandersnatch late last year and then Bear Grylls-starrer You vs. Wild earlier this week, it's causing newer headaches for Netflix's director of globalisation, Kathy Rokni.

Rokni noted that some languages make more use of gender than others, with “the verb changing depending on what comes before it and what comes after it.” That's fine for a linear story but when it's something dynamic like Bandersnatch, “you don't know exactly where this sentence will come in because it's really dependent on what decision the audience makes. So the sentence changes, right?

And later on in Bandersnatch, when the protagonist — in this case, the viewer — has to dial his therapist, the dubbing team was temporarily flummoxed. “Phone numbers, in some languages, you tell them number by number,” Rokni said. “In some, you group them together. The first two together, the second three, you know. How would you say that? How we use that? So a lot of that was some of the stuff that they were thinking about.”

While Netflix has started to localise its content in India — Mowgli: Legend of the Jungle and Ghoul are two of those available in Hindi, Tamil and Telugu — it has yet to localise the interface. That might be down to the fact India is considered a dubbing market rather than a subtitling one, as Rokni confirmed to us, which translates as that Indians are fine with reading in English but prefer to listen in a regional language. 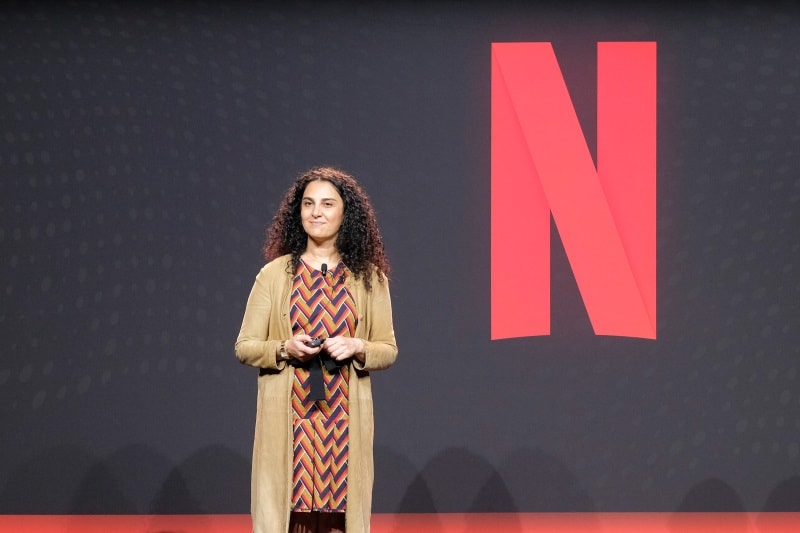 Netflix's director of globalisation, Kathy Rokni, on stage at an event in Los Angeles in March
Photo Credit: Adam Rose/Netflix

“I think that's why, if you look at some of the content that we have on the service, they are dubbed but not necessarily subtitled in Hindi. We've seen that people perhaps listen — especially for original content coming from India — they listen to the original language, but they see it in English subtitle at times.”

Ultimately though, Rokni noted, it's also a “business growth discussion” and “whether we have enough members”. But it's something they do “talk about it all the time”.

“For our team specifically, we're always thinking, ‘If we decide to localise in India, how should the UI look like? Should it be in English? Should it be in Hindi? Should it be Tamil? You know like depending on [the user]. These are definitely questions that we've been trying to answer and find out what is the best approach.”

Netflix sponsored the correspondent's flights and hotel for an event in Los Angeles.

Further reading: Netflix, Netflix India, Black Mirror, Black Mirror Bandersnatch, Mowgli, Ghoul
Akhil Arora Email Akhil Akhil Arora covers entertainment for Gadgets 360, interviewing stars such as Christian Bale and Anurag Kashyap, covering series premieres, product and service launches across the globe, and looking at American blockbusters and Indian dramas from a global socio-political and feminist perspective. As a Rotten Tomatoes-certified film critic, Akhil has reviewed over 150 movies and TV shows in over half a decade at Gadgets 360. When he is not completely caught up with new film and TV releases, Akhil ...More
Who Is in the Driver's Seat in Battle for South Korean Gaming Giant Nexon?
Disney+ to Gradually Expand Internationally, Starting in Europe