Mubi Is an Ephemeral Streaming Service for Cinephiles, Where Films Are Gone in 30 Days

And which offers a free PVR ticket every week to go with it.

How many streaming services is enough streaming services? There are the obvious ones. Pick up Netflix for its originals and breadth of international fare. Throw in Hotstar for HBO and live sports. Make use of Amazon Prime Video since you're paying for quick shipping anyway. And then there's the free-of-cost one you get thanks to your mobile operator, which has tie-ups with most of the other folks. Surely, that's enough? After all, put together, you're already looking at over 15,000 titles.

Well, maybe not. The push for maximum appeal means catering to broad tastes, and that allows a lot to slip through the cracks. Look at our pieces of best movies on Netflix, Amazon, and Hotstar, and you'll soon realise that most of it is made up of American, British, and Indian films from the ongoing century. Cinema has a diverse history spread over a hundred years, so why should a few countries and the last 19 years dominate the big streaming services? Enter Mubi, a platform for cinephiles.

“We're not competing with Netflix, we're not trying to show the biggest TV series,” Mubi founder and CEO, Efe Çakarel, tells Gadgets 360. “You will have your Netflix, or Amazon, or Hotstar, because they're going to bring you scale. But if you're really into film, if you love cinema, you will need Mubi as well. We're a complimentary experience.”

Likely named after the eponymous Japanese word for movies, Mubi is a curated streaming service. Every film is hand-picked by a team of self-confessed film lovers. Mubi is not interested in impressing you with numbers, so it doesn't have thousands of movies. In fact, it doesn't even have a hundred of them. Instead, Mubi releases just two new films a day — one Indian and one international — which are only available for the next 30 days. Then, they are gone.

Born in Turkey, Çakarel moved to the US for engineering and computer science degree at MIT and then sprung over to the other side of the country for his MBA at Stanford. Predictably, he ventured into investment banking with Goldman Sachs. On a trip to Tokyo in 2007, as the story goes, Çakarel wanted to watch In the Mood for Love, the Wong Kar-wai masterpiece that's often listed as one of the greatest films of all time. But it wasn't available online, so he founded Mubi, which now has over 9 million subscribers in 190 countries across the globe.

Çakarel notes that it took Mubi 12 years to come to India — it officially launched mid-November — though he admits it was three years ago when they first said: “We need to go to India.” And they are doing things a little differently here. Globally, they release only one new film every day but with India, they have a dedicated channel for films made by Indians called “Mubi India”. (The other one is called “Mubi World”. Additionally, Mubi also offers a collection of titles on rent.) 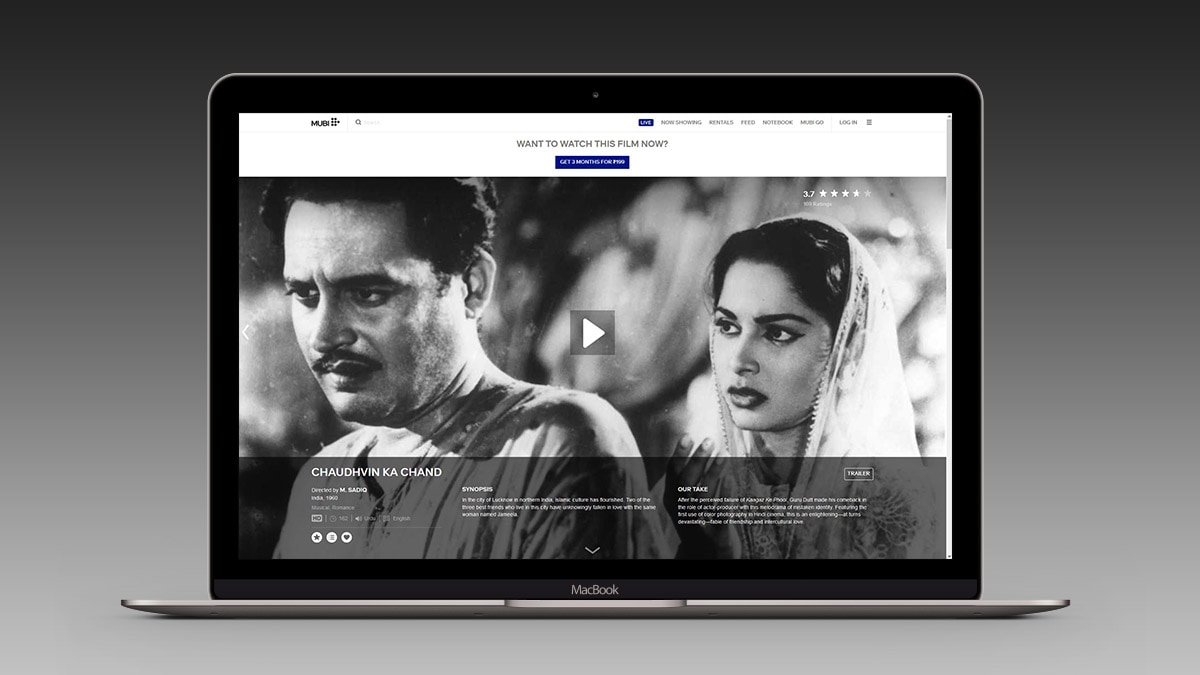 “This is the first country we are doing that,” Çakarel adds. “When we first came here and really started to work on our content strategy, we realised the local cinema industry is so rich and has an amazing heritage. So we decided to create an additional channel that is dedicated hundred percent to Indians. And I'm so excited about that, because the kind of films that we're signing is I think the best of the Indian cinema. Classic and contemporary, you're going to see us bring you some newer films there as well.”

On paper, India is a huge market. But getting people to pay for a monthly recurring online service, especially a niche one like Mubi, won't be easy. It's likely why Çakarel has opted for localised pricing. Mubi costs GBP 15, about Rs. 1,400, per month in the UK, but it's about a third of that in India at Rs. 499.

And at launch, Mubi is running a promotion: three months for just Rs. 199. It's even partnered up with the MAMI Mumbai Film Festival to offer three months for free. Çakarel thinks it's a very good price point and quite aggressive, but only time will tell if people stay on after the first three months.

And that's not all. Less than two weeks after launch, Mubi announced a partnership with PVR Cinemas — India's biggest multiplex chain — called Mubi Go, which offers subscribers a free ticket to a film playing in theatres each week. The Mubi team picks what they feel is the best film that particular week. Knives Out, Rian Johnson's murder mystery whodunnit starring Daniel Craig and Chris Evans, was the first Mubi Go choice. This week, it's Hotel Mumbai, the Dev Patel-starrer about the 26/11 attacks.

It seems like a win for everyone. Subscribers get a free ticket, Mubi gets the word out for its service, and PVR hopes to gain more revenue from ticket upgrades and concessions. (As we've noted earlier, the free Mubi Go ticket is limited to the first few rows closest to the screen.) PVR Pictures CEO Kamal Gianchandani says it also helps get the word out for celebrated indie films such as Knives Out, which might not have got the same exposure otherwise.

“We are increasing attendance for [films like] Knives Out,” Gianchandani added. “And [a streaming] platform is actually pushing people out of homes to a cinema to watch Knives Out. [...] You need these promotions to be able to sort of increase the probability of theatrical success. While [Knives Out is] not a new addition to the overall films which are releasing, but it's sort of highlighting some of the good quality films to the audiences.”

A partnership between a cinema chain and a streaming service naturally raises other queries. Gianchandani says they are open to screen films produced or distributed by Mubi as well, a practice Çakarel & Co. have tried with some success in the UK and the US in the past. But Gianchandani is adamant that they would have to honour India's eight-week theatrical window, which remains an issue with Netflix. But Çakarel is happy to play along.

“It all depends if there is already a film that has a distributor that we think is amazing,” Çakarel adds. “Sometimes there's a film that we think is really amazing, but nobody wants to distribute it. If PVR is interested in showing it, it could be Mubi Go film of the week. Sometimes nobody is going to be interested in showing it in cinemas, but we think everybody should see it, we're just gonna go straight to Mubi.

“But we will always try to show it in the cinemas first. That's the difference with us. I think the theatrical window is necessary, absolutely, and it's important for films to have some breathing room in order to really be seen in the cinema. We're very pragmatic about that.” 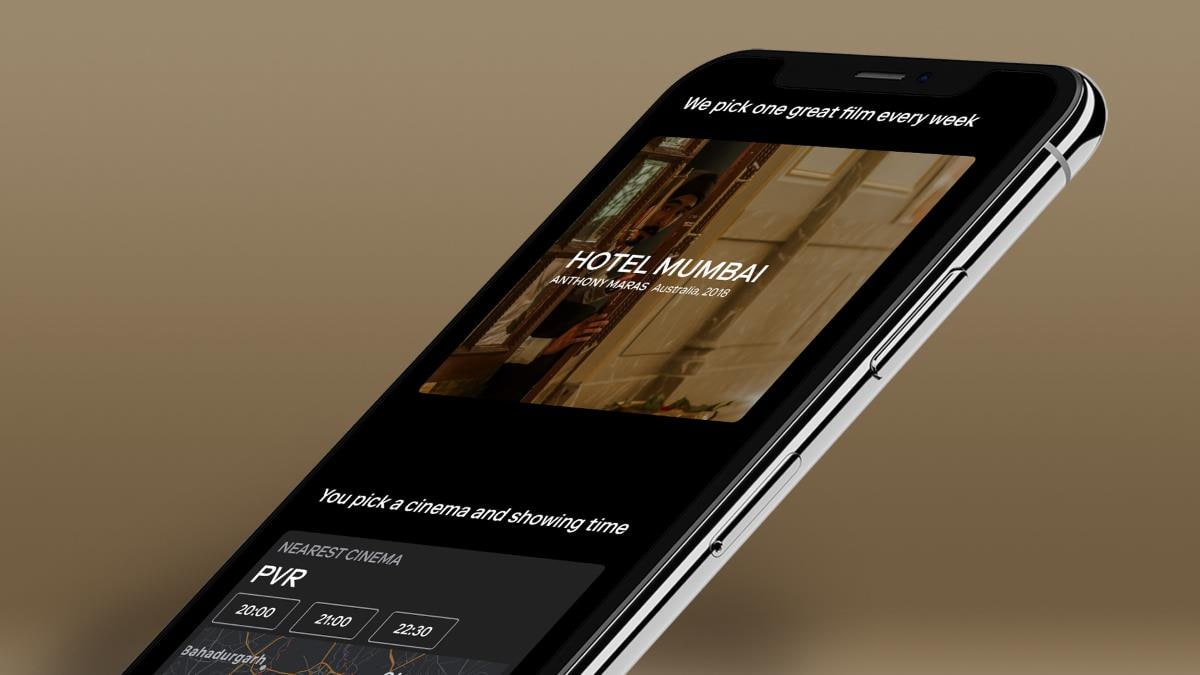 While a free PVR ticket each week is a good perk, the heart of Mubi is still its own platform. The most important element of any online service, more so for video providers, is their reliability. No one wants to see a buffering circle in 2019. Çakarel concurs, notes Mubi has built its entire tech stack in-house and says: “We don't talk about this, in fact, nobody asked me these questions except you. But you need to get behind the scenes, you need to get the experience really right.”

“That's why we even built our own CDN, content delivery network,” Çakarel adds. “Who does that, like only Netflix and Amazon. We have own streaming servers. As a result, I know exactly how content is distributed. I can measure it and then I improve it. Whereas if you gave your content to a CDN, it's like sort of a black box. You don't know if your customers in Bangalore are really having a good experience. Unless they write to you on support. But most people don't write, they just go somewhere else.”

Çakarel claims that usually, a service like say, Hotstar, relies on batch encoding. That means they select a resolution (SD 480p, HD 720p, or full-HD 1080p) and a bitrate (the higher, the better generally), which gives them a version of the file. But Mubi looks at the source file's parameters, whether it is old or new, whether it was shot on film or digital, and things like that. On top of that, they then optimise for 20 different devices sizes.

Since Mubi is new to India, what you watch will be streamed from Mubi's servers in Singapore. If there are problems, it will fall back to Hong Kong or Europe. But Mubi is already planning to set up servers in India in the “coming weeks”, Çakarel adds, and they are also talking to carriers given India is a mobile-first market.

“For example, I want to be in the towers of Jio,” Çakarel remarks. “I shave milliseconds, but it matters because with big files, latency makes a big difference. Because if packets are being dropped, and it's being recalled — all that back and forth, if the distance is large, it makes a big difference. Or it just falls down to the lower quality, which isn't something anyone wants to see.”

In 2020, Çakarel wants Mubi's tech focus to expand to include 4K HDR and Dolby surround sound. Currently, it's limited to 1080p and stereo sound.

As for India in 2020, Çakarel says they “expect to lose money here in the next year. But I'm focused on growth here, at the moment, not on profitability, because we have a very healthy business outside. Our revenue grew more than hundred percent last year, and we were cash flow positive. So I'm committed to India in the long run.”

“We're ready for prime time, with our brand, our positioning, our team, our technology, our capital,” Çakarel adds. “We really have our team on the ground, who's creating that experience. And we're getting local deals with the distributors. I mean, you can really now crack this place.”

Mubi Is an Ephemeral Streaming Service for Cinephiles, Where Films Are Gone in 30 Days
Comment