Molly's Game, The Expanse, Cardi B, and More – The Weekend Chill

Late on Sunday, Disney dropped a full-length trailer for Solo: A Star Wars Story, the standalone film that follows the origins of Han Solo before he met him in the cantina in A New Hope, aka the first Star Wars. It offered the first look at Paul Bettany’s character. Solo is out May 25.

On Monday, Westworld co-creator Jonathan Nolan pranked fans on Reddit by promising to spoil the entire season, in order to do away with the problem of wild theories during the season, and then delivered an elaborate Rickroll that contained stars Evan Rachel Wood and Angela Sarafyan singing the infamous song. Westworld season 2 starts April 22. Also on Monday, a THR report said that Christina Hodson (Bumblebee) had been hired to write Batgirl, which Joss Whedon left in February.

There were two new cast announcements for Star Trek: Discovery this week. On Monday, Anson Mount (Marvel's Inhumans) joined as Captain Pike, who was briefly mentioned at the end of season one. And on Wednesday, Tig Notaro (One Mississippi) boarded Discovery as a guest star for season two, which has begun filming. There’s no premiere date yet.

On Tuesday, Deadline reported that Apple had won a bidding war for a series adaptation of Isaac Asimov’s Foundation series. David S. Goyer (Man of Steel) and Josh Friedman (War of the Worlds) will serve as showrunners and executive producers, who have been working on the show since last June. It joins a long list of projects at Apple, none of which have a platform or release date.

On Wednesday, Netflix said it would pull out of Cannes Film Festival, after it was banned by the French to compete for the Palme d’Or. The issue stems from Netflix’s policy of wanting to releasing its films on the same day in theatres and streaming, which clashed with the theatre laws in France that call for a three-year window before streaming is allowed, and prevented it from securing a release last year. Netflix had five films planned for Cannes 2018, including Alfonso Cuarón’s Roma and Paul Greengrass’s Norway, and none of them will be screened at the prestigious event next month.

And later the same day, THR brought word that The Office star John Krasinski had found his next directing gig after the success of A Quiet Place. It’s a sci-fi film called Life on Mars, based on a short story by author Cecil Castellucci called We Have Always Lived on Mars, which follows a woman on a Martian colony who finds out one day she can breathe the air. There are no other details on the project.

On Thursday, Netflix announced a third season of Jessica Jones, a month after its slightly disappointing second aired. The show's first season is still the best that Marvel-Netflix have given us, so let's hope it can go back to being that. Later in the day, HBO announced the renewal of Silicon Valley for a sixth season, with the fifth season currently in progress.

TV:
The Expanse
Adapted from the eponymous book series by James S. A. Corey, the pen name of authors Daniel Abraham and Ty Franck, television’s most realistic sci-fi show returned this week for its third season, will cover the remaining half of book #2 Caliban's War, and centre on book #3 Abbadon's Gate. It picks up right where it left off in season two, with Chrisjen (Shohreh Aghdashloo) and Draper (Frankie Adams) stuck aboard Jules-Pierre Mao’s ship.

The Expanse season 3 gets off to a promising start, and enjoys a lot of forward momentum thanks to a narrower, more cohesive approach, as we said in our review. Elizabeth Mitchell and David Strathairn join the cast this year, with the former playing Reverend Dr. Anna Volovodov, a Methodist on Jupiter’s moon Europa, and the latter rumoured to play Captain Ashford, who has an important role working for Fred Johnson (Chad L. Coleman). 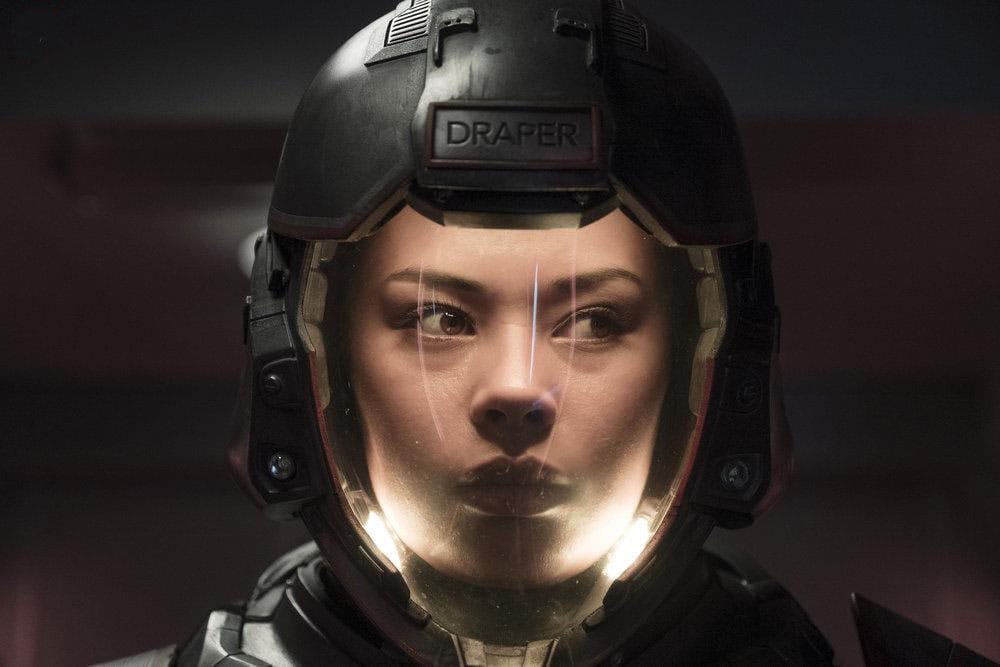 How to access: Syfy, Amazon Video US, Google Play US, iTunes US, and Microsoft Store US
Time commitment: 1 hour, weekly

Women come and go through Reynolds’ life, until the day he falls in love with a young, strong-willed waitress, Alma (Vicky Krieps). His heavily controlled and tailored life soon unravels, and the film captures his creative journey, and the women who keep it running. This is Krieps’ first American film, while Day-Lewis has said it's his final film.

Phantom Thread has been heavily praised, with critics highlighting the romantic tension, humour, and Day-Lewis’ performance. The New York Times’ AO Scott said “the captivating strangeness of the mood and the elegant threading of the plot are likely to hold your attention [the first time], but later you can go back to savour the lustrous colours”. The New Yorker’s Anthony Lane loved Day-Lewis’ work, calling him “the [Roger] Federer of film”.

How to access: Amazon IN, Amazon US, Amazon Video US, Google Play US, or iTunes US
Time commitment: 2 hours and 10 minutes

Molly’s Game
After writing some highly acclaimed TV series and films over the years – The West Wing, The Social Network, A Few Good Men, and Steve Jobs among them – Aaron Sorkin made his directorial debut last year with this true story of Molly Bloom, a former skier who ran a high-stakes underground poker game that included Hollywood celebrities, athletes, business tycoons, and - unknowingly - the Russian mob. The last of those got her in trouble with the FBI, which brought down her empire.

Molly’s Game stars Jessica Chastain as the eponymous poker queen, Idris Elba as her lawyer, Kevin Costner as her father, Michael Cera, Brian d’Arcy James, Chris O’Dowd, Bill Camp, Graham Greene, Claire Rankin, Joe Keery, and Jeremy Strong. The film unfolds in two parallel narratives: one showing the rise of Molly in the underground poker world, and the other where she figures out the best way to approach the upcoming trial with her lawyer.

Sorkin was nominated for his screenplay at the Oscars, Golden Globes, and the BAFTAs. In traditional Sorkin style, the film contains nonstop dialogue, and it’s delivered with skill. Critics praised the work of Chastain and Elba, calling the former’s one of her career best performances. She “proves as eloquent in silence as she does in speech and deals audiences a winning hand,” Peter Travers concluded in Rolling Stone.

How to access: Amazon US, Amazon Video US, Google Play US, iTunes US, or Microsoft Store US
Time commitment: 2 hours and 20 minutes

All the Money in the World
When director Ridley Scott said he’d replace Kevin Spacey – who was accused of multiple sexual assaults over the years – with Christopher Plummer, and still manage to hit the film’s December release date, it seemed far-fetched. But he succeeded, with the film telling the story of J. Paul Getty (Plummer) refusing to pay the ransom for the abduction of his 16-year-old grandson in 1973.

For Getty, the issue wasn’t about money – he was a billionaire – but that it would encourage further kidnapping of his family members. The son’s mother Gail (Michelle Williams) attempts to convince and sway him as the captors turn brutal over the weeks, but he’s unmoved. She then works with his advisor (Mark Wahlberg) to secure her son's release.

All the Money in the World has been praised by most critics, noting the work of Plummer, and the gripping nature of the true story. LA Times’ Kenneth Turan concluded the film “benefits in much the same way that Scott's similar (and underappreciated) American Gangster did, from the director's expertise at bringing pace and interest to stories he cares enough about to sink his teeth into.”

How to access: Amazon US, Amazon Video US, Google Play US, iTunes US, or Microsoft Store US
Time commitment: 2 hours and 12 minutes

Other mentions:
The seventh and final season of New Girl began earlier this week. It picks up four years after season six as Nick (Jake Johnson) and Jess (Zooey Deschanel) struggle with the decision whether to get married, Schmidt (Max Greenfield) and Cece (Hannah Simone) have a three-year-old daughter, while Winston (Lamorne Morris) and Aly (Nasim Pedrad) are married and expecting. It’s available on Hotstar in India.

A new late-night comedy show from another Daily Show veteran, Wyatt Cenac’s Problem Areas, arrives Friday on HBO (and likely on Hotstar, starting Saturday). But unlike most other shows where the host sits behind a desk, Cenac will report on cultural and social issues from the field. Last Week Tonight’s John Oliver is a producer.

Meanwhile on streaming, Disney movies continue to hit Netflix. This week, it’s Monsters, Inc., and Monsters University. The other worthwhile mention is 6 Balloons, a drama starring Abbi Jacobson (Broad City) and Dave Franco (Now You See Me), which premiered at SXSW last month. Check out our April guide for more picks.

Music:
Isolation by Kali Uchis
A Grammy nominee earlier this year for her contribution to Daniel Caesar’s “Get You”, the 24-year-old Colombian-American singer has been slowly climbing the music ladder for the last few years, collaborating with Snoop Dogg, releasing an EP and working with Gorillaz in 2015, and opening for Lana del Rey two months ago. And now, she’s got her debut album: Isolation, released last Friday to critical acclaim.

Though most of the album is English, Uchis does switch to Spanish for the popular single “Nuestro Planeta”, featuring Colombian reggaetón artist Reykon. He’s not the only guest appearance on Isolation, with the likes of BIA, Bootsy Collins, Steve Lacy, Jorja Smith and Tyler, the Creator involved as well. Writing for Pitchfork, Julianne Escobedo Shepherd noted “her wide range […] positions her to become a new gravitational force in pop”.

Paste Magazine’s Madison Desler was even more effusive in her praise, saying: “For an album that’s 15 tracks to be this consistently good is a rarity, an anomaly, and an artistic triumph that should place it on every Best Of list at the end of the year.”

Invasion of Privacy by Cardi B
In the last four years, Cardi B has donned many hats. She’s gone from being a New York stripper and an Instagram celebrity, to reality TV star, and to being signed by Atlantic Records after recording two mixtapes. In January, she became the first woman to have five singles in the top 10 on Billboard’s R&B/Hip-Hop chart, and followed that up with the release of her debut album, Invasion of Privacy, last week, which features appearances from 21 Savage, Chance The Rapper, Kehlani, and SZA.

The album has been received well by music critics. Writing for The New York Times, Jon Caramanica said: “What’s most promising about the exuberant and impressive Invasion of Privacy - an album full of thoughtful gestures, few of them wasteful - is that it’s a catalogue of directions Cardi, 25, might go in, slots she might fill, or even invent. [...] A hip-hop album that doesn’t sound like any of its temporal peers.”

Entertainment Weekly’s Karas Lamb concluded: “Where Cardi B struggles to perfect the timing of her flow, she makes up for it with the heft of her voice. Combining the gruff delivery of Biggie Smalls with the bird-flipping fire of Tupac Shakur and the bubbly aura of a tween star, Cardi deploys a hybridized power vocal that punctuates trap and bounce-heavy pop with a witty presence that makes her narrative universally accessible.”