The good days of streaming are (somewhat) coming to an end.

Lionsgate Play on the homescreen of Vodafone Play

Netflix's successes as a streaming service has convinced Hollywood of the future. It's why some of the American entertainment giants — be it Disney, WarnerMedia, and NBCUniversal — are all planning to jump into the streaming business over the next year. For consumers, this is bad news. As the biggest studios launch their own apps, it'll inevitably fragment the market. Avengers will be exclusive to Disney+, Game of Thrones will end up on HBO Max, and The Office will move to NBC's as-yet untitled service. But while all of them have yet to announce their foray into India — Disney is the only one with a planned 2021-22 Asia launch — one Hollywood studio is already here to do that: Lionsgate.

Best known for film franchises such as John Wick, Rambo, The Hunger Games, and The Twilight Saga, and award-winning films such as La La Land, Crash, and Hotel Rwanda, Lionsgate launched its own streaming service — Lionsgate Play — in India earlier in August, on top of Vodafone Play, the mobile operator's entertainment aggregation service. (Technically, Lionsgate Play is available on Vodafone Play, Idea Movies & TV, and to You Broadband subscribers.) Lionsgate isn't following the same playbook as its Hollywood counterparts though, for now at least.

“We're just following the reverse path,” Lionsgate South Asia MD Rohit Jain told Gadgets 360, noting they have opted to first form partnerships before going directly to consumers with their own app because they “want to reach out to maximum customers first, [and] worry about technology later.”

That also gives Lionsgate time to prepare for a full-scale launch, considering most of its biggest properties are currently tied up in existing deals. John Wick? Four different platforms. Twilight? Three different platforms. Rambo and La La Land? Mostly missing, or Amazon Prime Video. Hunger Games and Crash? Netflix. Jain admitted the plan is to let existing deals expire so the rights revert to Lionsgate. He also noted that Lionsgate has more than 70,000 titles in its library, which makes it a pretty big competitor to deal with in the English-language space. 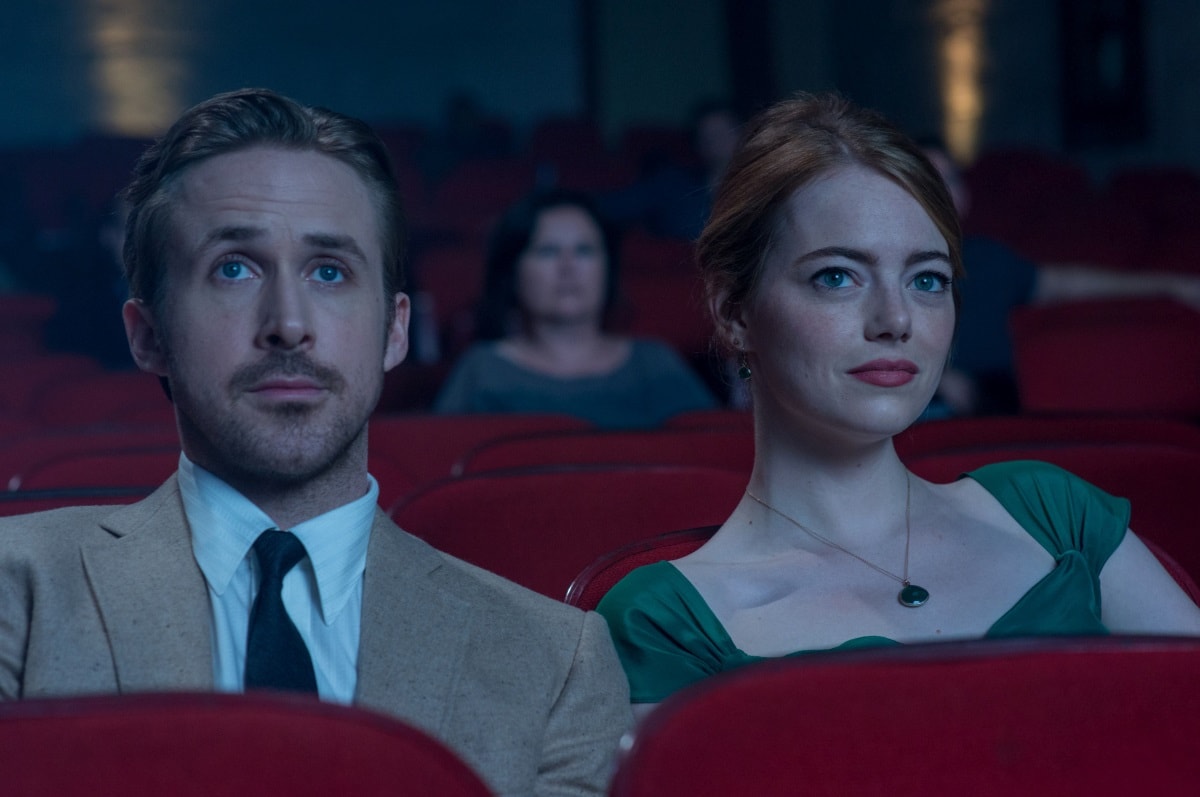 Lionsgate Play is sparse for now, with just 39 titles in total. But it's already flexing its muscles with exclusive digital premieres, debuting Taron Egerton-starrer Robin Hood among others. Moreover, all new Lionsgate movies will henceforth be exclusive to Lionsgate Play, including the likes of John Wick: Chapter 3 – Parabellum, the Charlize Theron, Seth Rogen-starrer rom-com Long Shot, or the upcoming neo-noir black comedy thriller Knives Out, starring the likes of Daniel Craig and Chris Evans, and written and directed by Rian Johnson (Star Wars: The Last Jedi).

“We want to try and make sure our movies are available as early as possible to the customer as the windows allow,” Jain said. He is referring to the theatrical, television, and home video windows, which dictate how long it takes for a film to go from the big screen to the mobile one. “Because if the movie comes out [in theatres and] comes to the consumer [at home] after one, one-and-a-half years, it's already lost its relevance. Now, they are thinking about the new movie out in the theatre.”

Lionsgate Play is going the extra distance with the films on offer, dubbing them in Hindi, Marathi, Tamil, and Telugu to begin with. Jain explained why: “While we want to solve for reach, we're also trying to solve for relevance. Because there's a discerning audience out there who wants to watch a movie but may not be an English-viewing customer. They like that high-octane action, that quality of moviemaking, all of that. So [by dubbing films in local languages,] that's what we're doing.”

For now, Lionsgate Play is focused entirely on films, though it will expand said focus to series sometime next year, Jain revealed. Thanks to its subsidiaries Lionsgate Television and Starz, it has its fingers in a lot of (television) pies, including the likes of Mad Men, Orange Is the New Black, the musical drama Nashville, and the comedy-drama Casual. All those titles are currently locked up in existing deals, but Lionsgate will let those expire as well ultimately. It'll make exceptions for some such as Orange, for which “we have a really, really long-term deal” with Netflix, Jain said. 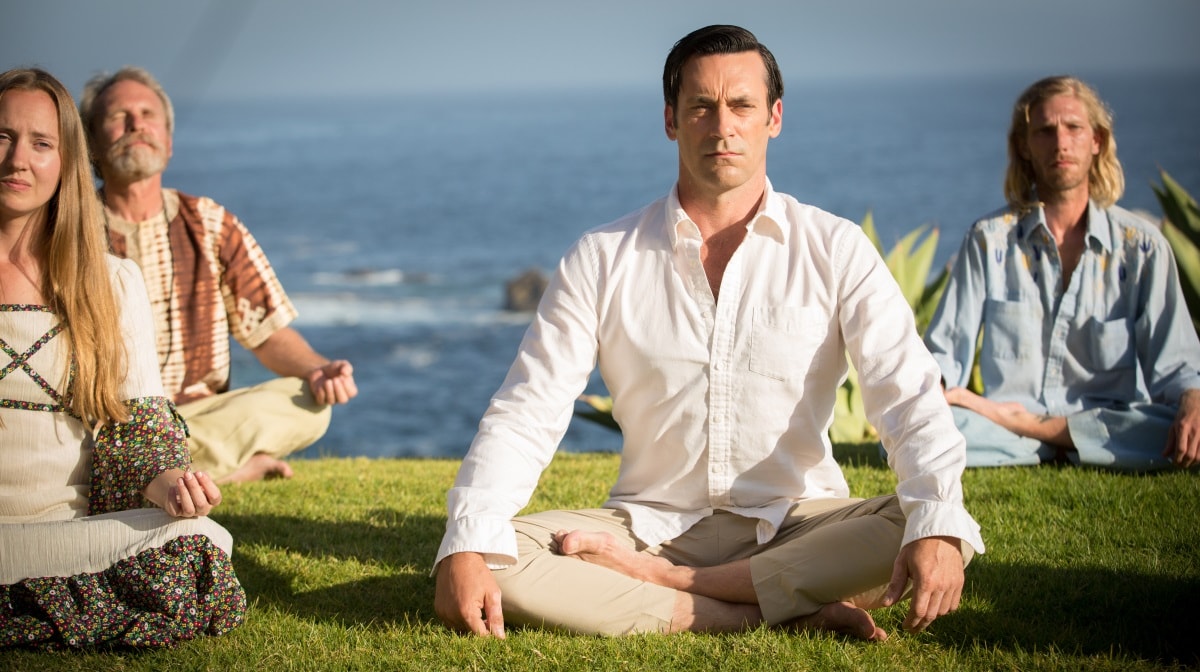 And in a move that will eventually pit it directly against the likes of Netflix and Prime Video, Lionsgate Play will also produce its own original series content, in addition to co-producing Hindi-language films and acquiring content from other studios.

“India is opening up to new-age content in a very rapid way,” Jain added. “And we want to focus on that. We've been developing some high-cost premium series internally. We've got writers and showrunners in place. We announced couple of co-production films, Hindi films last year, [and] we've just signed one more. So, we're doing a bunch of films. But largely, we're, as an organisation, focusing more on TV series.”

Jain revealed that the streaming side of things — what's called Lionsgate Play in India is known as Starz Play elsewhere — is “a global priority business for us”, having launched it “in more than 45 countries in the last two years. And we're very excited to have launched [in India] with Vodafone.”

But the partnership with Vodafone isn't the first for Lionsgate in India. In November last year, Lionsgate struck a deal with SonyLIV for its television content. Owing to that, SonyLIV has a dedicated section for “Lionsgate Television” which includes the likes of Charlie Sheen-starrer Anger Management, the crime drama Power, the Latinx drama Vida, and the aforementioned Nashville among 17 others. But the content isn't the only differentiator between the two, Jain revealed. 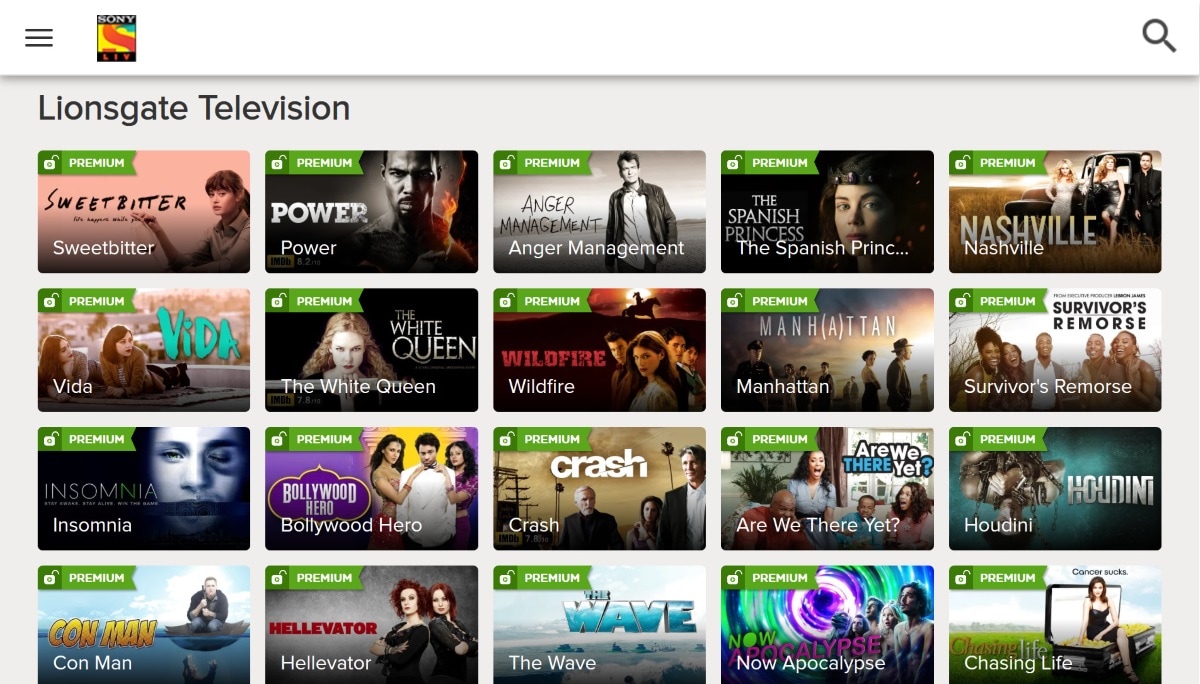 “SonyLIV is a licensing deal,” he said. “We're always providing content to partners, whether it's Netflix, Amazon, Star, Sony, we're always working together to provide them with great quality content. But [Lionsgate Play] is our own streaming business. We control that programming, we control that backend, that's our subscriber business. [Lionsgate on SonyLIV is] Sony's business.”

Both those deals ultimately come down to reach, as Jain said previously: “If you look at the TV channels, the English movie channels, they're available to at best five to 10 million homes. If you look at the [streaming] platforms today, again we're talking about, by different estimates, maybe 10 to 20 million. Of course, at this point, this will be available only to Vodafone customers. But in the coming months, quarters, you'll hear many such partnerships being announced.

“Over a period of time, in the years to come, one of our vision and goals is to make sure we are available to at least hundred million homes, 100 million customers. Which is 10x from the current 10 million potential reach. That's what we're working towards. There's always going to be the first player. So this is our start.”

Further reading: Lionsgate Play, Vodafone Play, Idea Movies and TV app, You Broadband, Starz, Hollywood, Streaming Services, Sony LIV, SonyLIV
Akhil Arora Email Akhil Akhil Arora covers entertainment for Gadgets 360, interviewing stars such as Christian Bale and Anurag Kashyap, covering series premieres, product and service launches across the globe, and looking at American blockbusters and Indian dramas from a global socio-political and feminist perspective. As a Rotten Tomatoes-certified film critic, Akhil has reviewed over 150 movies and TV shows in over half a decade at Gadgets 360. When he is not completely caught up with new film and TV releases, Akhil ...More
HP Chromebook 14 With Intel Apollo Lake Processors Launched in India Starting Rs. 23,990