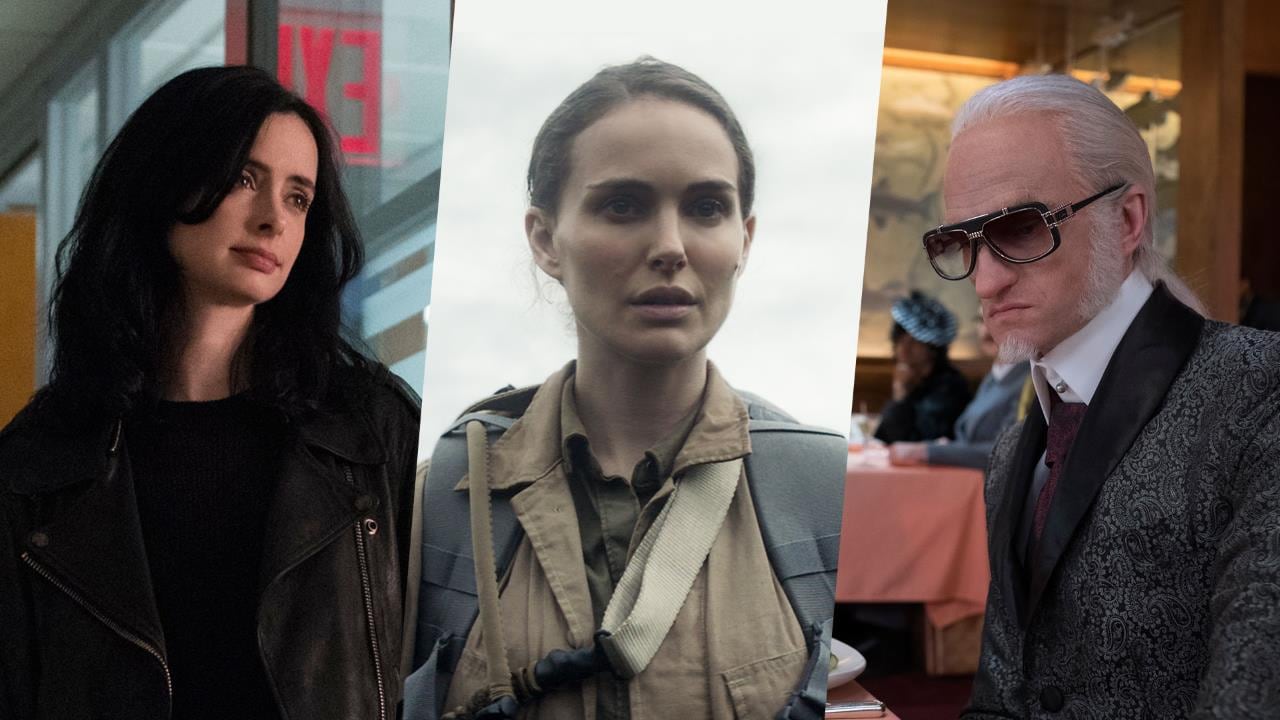 (L-R): Jessica Jones, Annihilation, and A Series of Unfortunate Events

Netflix should probably just forget February 2018 ever existed. From Altered Carbon, Love Per Square Foot, to Mute, all the big Netflix Originals can be summed up by the title of another ho-hum February original: 'Everything Sucks!'

The train continues full speed in March, with over 40 titles across films, TV shows, stand-up comedy, and documentaries. The biggest of the lot is Marvel's Jessica Jones season 2 on March 8, which carries big expectations after its stellar debut in 2015, and Annihilation, the Natalie Portman-starrer sci-fi from Alex Garland (Ex Machina) on March 12. The other standout name is A Series of Unfortunate Events, whose second season drops March 30. There's an Indian first in March too; Netflix's first Indian documentary – Ladies First, about former world number one archer Deepika Kumari – lands March 8.

Beyond that, it's TV series where Netflix's original output is highest. There are two in the shortened first week: Montreal football team drama 21 Thunder, and paranormal horror Ghost Wars in their debut year. March 9 brings the third part of David Letterman's new monthly talk show, My Next Guest Needs No Introduction, with Malala Yousafzai, in addition to the third and final season of Love on March 9. Netflix will also add Asian crime-drama Bad Guys: Vile City, and British detective limited series Collateral in the same week.

Moving onto original films in March, there are seven other options in addition to Annihilation: Canadian horror Ravenous on March 2, and The Outsider – a post-WWII set-in-Japan story where Jared Leto plays an American POW, who rises through the yakuza ranks – on March 9, a determined dog in family-friendly Benji on March 16, Seth Rogen-produced action-comedy Game Over, Man!, and hip-hop biopic Roxanne Roxanne on March 23, followed by sport drama First Match, and comedy Happy Anniversary on March 30.

Ladies First isn't the only documentary in March. There's also true crime Flint Town on March 2, which looks at the inner workings of the Flint, Michigan police department; Take Your Pills, about how drugs like Adderall affect students, athletes, and coders, and Wild Wild Country, which takes a look at guru cult and Rajneeshpuram on March 16; and the impact of hip-hop in Rapture on March 30.

With that, here are our five picks for March 2018 that you should watch out for, and the full list of movies and TV shows coming to Netflix India after that.

Annihilation / March 12
Not sure if it'd turn a profit outside the US, Paramount took Alex Garland's second film – his first was the stylish and cerebral Ex Machina – to Netflix, who's now handling international distribution. Annihilation, based on Jeff VanderMeer’s best-selling Southern Reach Trilogy, has been a terrific hit with critics. It stars Natalie Portman, Jennifer Jason Leigh, Gina Rodriguez, Tessa Thompson, Tuva Novotny, and Oscar Isaac.

Marvel's Jessica Jones / March 8
Expectations are high for the sophomore year of Marvel's best TV show yet, and the only female-led one, after creator Melissa Rosenberg delivered a first season that deftly dealt with themes of rape, sexual assault, and PTSD, while still being a good superhero show. Early reviews based on five of thirteen episodes say it's a slow-burn and a step down, so we'll have to wait till March 8 to find out how the second season performs as a whole.

A Series of Unfortunate Events / March 30
After a first season that turned out to be a pleasant surprise, and constantly watchable, Neil Patrick Harris' Count Olaf and his up-to-no-good theatre troupe of idiots return at the end of March, donning a bunch of more disguises as they try to prize away the Baudelaire fortune. Now that the cat is out of the bag [spoilers ahead] – season 1 revealed the parents weren't dead after all, and merely faked it – it'll be interesting to see how that develops, what with the next season (expected in 2019) being the last one.

Ladies First / March 8
23-year-old Indian archer Deepika Kumari, a former world number one (currently ranked #5) and gold medal-winner at the 2010 Commonwealth Games, is the subject of Netflix's first Indian documentary. Awarded both the Arjuna Award and the Padma Shri for her achievements, Ladies First traces Kumari's life from a humble village in Jharkhand, stumbling upon archery while in search of food at age 13, and becoming the world number one four years later. It's an astonishing journey, one worth your 40 minutes.

Flint Town / March 2
The town of Flint, Michigan gained global prominence in late 2015 after studies found that the city water supply had potentially exposed over 100,000 residents to high levels of lead, which led to a state emergency and a years-long pipe replacement process that will finish only in 2020. At the same time, Flint is also one of the most violent in the US, and with the water crisis causing a massive distrust in law enforcement officials, Flint Town looks at the state of policing by embedding its filmmakers in the police department.

March 20
The Confirmation
The Standups: Season 2