At SXSW in Austin, Texas over the weekend, Game of Thrones showrunners David Benioff and Dan Weiss announced that the final season of the show will have only six episodes. That fits neatly into their earlier 73-hour movie claim, as the upcoming seventh season contains only seven episodes. Game of Thrones returns to air July 16.

Netflix has stated it will be picking up Orson Welles’ uncompleted final film, The Other Side of the Wind. The streaming service will not only restore the content that was shot over forty years ago, but finance its completion at the post-production level. There’s no word on release date yet.

The Matrix remains one of the most iconic sci-fi films of all-time, and there’s apparently talk at Warner Bros to explore a sort of rekindling its world for viewers again, according to The Hollywood Reporter. But although the initial news hinted at a reboot, people suggest that it may take a more Rogue One approach to the new venture, which might mean exploring something previously unexplored in the timeline of The Matrix.

On Wednesday, Pixar released the first trailer for its next original animation feature, Coco. The story is set in a small Mexican village, and the voice cast includes the likes of Benjamin Bratt, Gael García Bernal and Renée Victor. Coco rolls into theatres November 22.

With Mystery Science Theater 3000 returning to Netflix for a revival next month, some of its most iconic episodes have been made available on the service, including Manos: The Hands of Fate, Catalina Caper, and Future War. The rights are region-based, so you may not see them where you live. The MST3K revival arrives April 14.

Spider-Man is getting another start in Homecoming this year – July 7, to be exact – but Sony Pictures is already looking ahead, as always. The studio has greenlit a Venom movie for October 5, 2018, and has hired Scott Rosenberg and Jeff Pinkner to write the script.

Lastly, Warner Bros. has pushed back the release of its standalone Aquaman movie by two months. It now comes out December 21, 2018.

But unlike other critics who take upon subjects such as art, film, or food, MacNeil likes to engage in real-life experiences, which are suggested to him by a fictional audience. After engaging in said activity, he rates it whether it was any good, and worth taking up on your own. As absurd as that sounds, the first two seasons of Review were excellent, with MacNeil “trying out” everything from making a sex tape, to having a best friend.

After a gap of couple of years, Review returned to TV this week with its third and final season, which early reviews say returns to its best. In the season premiere, MacNeil puts a pet to sleep, and then makes his dream come true.

Iron Fist
Netflix's newest Marvel series has gone on air now, and you can catch all 13-episodes on the streaming service right away. Iron First hasn't gotten too many positive reviews - after we watched the series, we called it a confusing mess of storytelling and appropriation - but if you still want to see for yourself, then you can check it out now.

In our view, it marks the first stumble for the Marvel-Netflix juggernaut, and what's going to be particularly interesting to see now is whether the upcoming follow-up, The Defenders, which is due sometime later this year, will be able to recover and bring back the highs of the others three series.

Movies:
Elle
Winner of the Golden Globe Award for Best Foreign Language Film, Elle is the story of a businesswoman named Michèle (Isabelle Huppert) who runs a successful video game company. Her life changes when someone assaults her in her home, and owing to her past experience with the police, she takes a radically different approach to tracking him down.

Directed by Paul Verhoeven (Starship Troopers) and written by David Birke, based on the novel Oh... by Philippe Djian - which won the Prix Interallié in 2012 - Elle shines owing to its two pillars, in the careful and nuanced work of its lead actress Huppert, who was nominated at this year’s Oscars, and Verhoeven’s finesse in presenting a story of great moral ambiguity, and a character study that touches on some seriously controversial themes.

With the film now on home media, you can also catch a making-of featurette, plus a tribute to Huppert, who is considered to be one of the all-time greats from France.

How to access: Amazon US, iTunes US, or Microsoft Store
Time commitment: 2 hours and 10 minutes

Fences
Before Fences existed as a film that Denzel Washington directed and starred in, alongside co-star Viola Davis – who won an Oscar for Best Supporting Actress – it was being performed as a Broadway play with those two exact stars. The adaptations are based on August Wilson’s Pulitzer Prize-winning play of the same name, which focuses on a black garbage collector called Troy Maxson (Washington) in 1950s Pittsburgh.

In his previous life, Maxson was a high performer in the Negro Leagues, but retired before baseball’s colour barrier was lifted. His anger over the situation presents itself in arguments with his family, who have problems of their own. The film’s screenplay too was written by Wilson, before his death in 2005.

Fences has been most praised for the performances from its two leading stars, which has also attracted its share of criticism, for what critics perceived to be a direct transfer of the action from stage to screen, and missing a sort of cinematic flavour. But because the story itself is gripping, so it’s easy to overlook that.

How to access: Amazon US, iTunes US, Google Play Movies, Microsoft Store, or YouTube
Time commitment: 2 hours and 19 minutes

Video games:
Lego Worlds
The simplest way to describe Lego Worlds, is like calling it Minecraft for Lego fans. It’s obviously structured differently but it’s still an open environment that contains procedurally-generated worlds, which are made of Lego bricks here.

As you’d expect with such a title, you can manipulate the bricks to create anything you can imagine, and even make use of landscaping tools to come up with mountain ranges, tropical islands, and so forth. Lego Worlds also gives you access to prefabricated structures that you can just add and remove at your behest. And the huge number of licenses the toy maker owns means you get to play with hundreds of characters that you’ve known for years.

Even in terms of vehicles, you can choose from bikes, helicopters, dragons, or even gorillas. There’s also an element of solving puzzles in Worlds, apart from quests that you can take on. But like other games of its ilk, these are almost secondary to the main experience.

Voez
Voez is set in a fictional town called Lan Kong Town, modelled after Taiwan’s Yilan county. The story follows a group of six high school students, who come together to create a band. Your goal is to make them internationally famous, and it’s essentially a rhythm game.

When you're not tapping and swiping to keep your rhythm combo going, you'll be absorbed by the awesome story that this game has. The game’s playing mechanics depend on your reactions to notes falling in time with the music. As they hit a bar on the bottom of the screen, you tap to get the highest score possible.

Of course, the difficulty is ramped by the song type itself. Depending on the song, the number of possible vertical channels that the notes appear in increase, and in sort of borrowing from Tetris, they might automatically shift side to side. 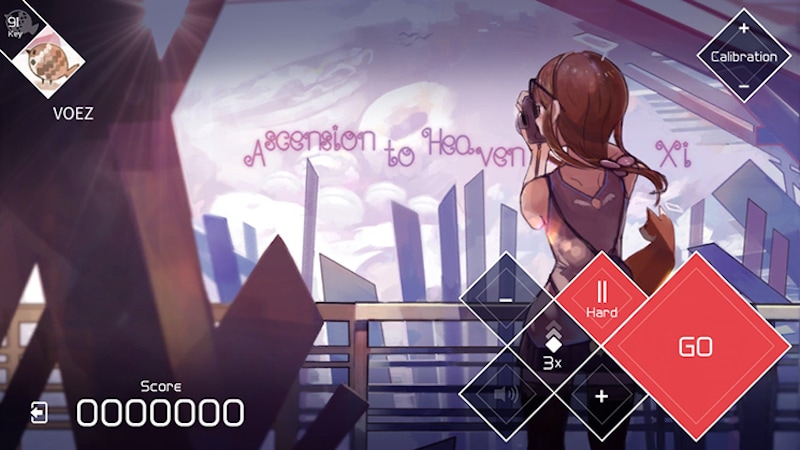 How to access: Nintendo Swtich; also on Apple App Store
Time commitment: As much as you want, really