Hotstar: How to Download, Hotstar Premium, Watch on PC, Best Movies and Shows, and More

On the back of India's love for cricket, an ad-supported model, and the deep pockets of its parent company Star India, Hotstar has turned itself into the biggest streaming service in the country by most metrics. At the same time, it's stayed away from going too far into original content unlike every other platform out there, preferring to license content from international heavyweights such as HBO, CBS, and Fox, the last of which owns Star India. As Disney plans to roll out its own streaming service next year, Hotstar will certainly be in a curious position given Disney's pending acquisition of Fox, and it'll be interesting to see what happens.

Hotstar is a video streaming service that is currently available only in India, the US, and Canada. Unlike Netflix and Amazon Prime Video, it relies on a “freemium” model, though that's only applicable in India. That means users can access a portion of the content for free, while the rest of the content — labelled ‘Hotstar Premium' — requires a monthly subscription. In the US and Canada, Hotstar is subscription-only.

Like the big two, the size of Hotstar's content slate is dependent on the deals in place with content distributors. It's why the Hollywood content is only available in India, which also keeps varying as the rights keep expiring and need to be renewed. Most of Hotstar's licensing deals aren't extensive enough, which is why you can't download HBO shows and Disney movies among others.

Moreover, Hotstar memberships don't work across regions unlike Netflix. If you have Hotstar Premium in India and are travelling to the US or Canada, you won't be able to watch Hotstar, and vice versa.

In India, yes and no. It's “freemium”, as we mentioned earlier. In the US and Canada, no it's not free.

It's pretty simple. Follow these instructions to download TV shows and movies from Hotstar on Android and iOS.

You don't need a Hotstar account if you're trying to watch free videos. To sign up in India, open the Hotstar website or app, and hit play on any video that carries the ‘Premium' sticker. Then follow the steps. In the US and Canada, visit the respective websites — us.hotstar.com or ca.hotstar.com — and then hit the subscribe button to begin creating an account.

If you are already registered, look for the sign in option to login. It's in the top-right corner on the website and in the left sidebar in the mobile app.

How to download Hotstar app? Is it free for Android mobiles?

The Hotstar app is available for download on Android and Android TV, iPhone, iPad and Apple TV, and Amazon Fire TV. In the US and Canada, it's also available as a channel on Roku. Use the respective links or search for ‘Hotstar' in the Play Store, App Store, Amazon Store, or Roku Channel Store.

Yes, the Hotstar app is free on all platforms, including Android.

There are two types of Hotstar Premium memberships available in India, one just for live sports and the other covering everything under the ‘Premium' umbrella including Hollywood movies and TV shows. The former, called All Sports, costs Rs. 299 per year while the latter is available at Rs. 199 per month or Rs. 999 per year.

The monthly subscription carries a seven-day trial. If you cancel within that period, your money will be refunded. The yearly subscriptions are non-refundable. 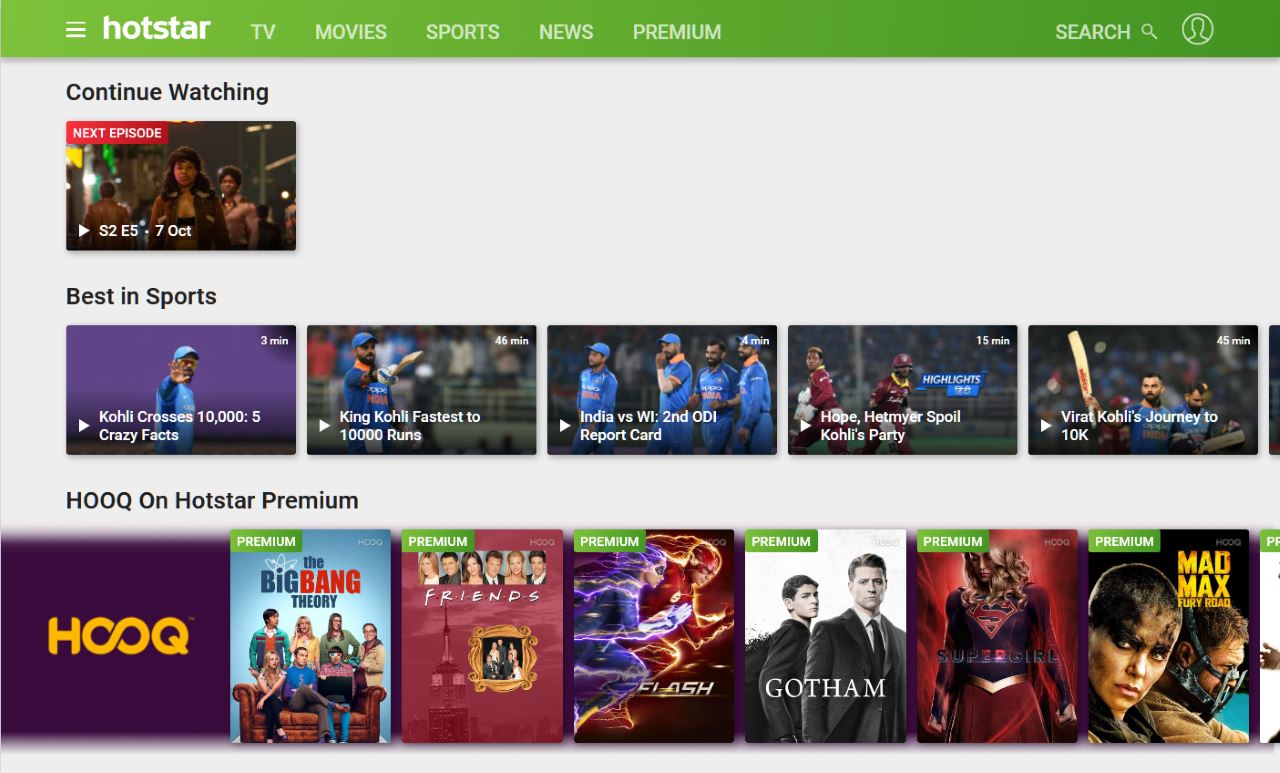 How to get Hotstar Premium for free?

Except the seven-day trial attached to the monthly Rs. 199 subscription, there is no other way to get all the content under Hotstar Premium for free. You can get a portion of it — 19 live channels — for free with Airtel TV or JioTV, but it's ad-supported mind you. Moreover, Airtel users have to purchase a separate sports pack for BCCI tournaments.

Hotstar in USA and Canada

Entertainment-only plans come with a month-long free trial in the US and Canada.

The Jio and Hotstar partnership gives the subscribers of the former access to 19 Star India channels. You will need both the JioTV and Hotstar app on your device. Open the JioTV app and select any of the 19 available channels and you will be redirected to the Hotstar app, where you can watch live TV without having to pay for Hotstar Premium.

How to watch Hotstar on PC? How to download Hotstar app for PC?

Simply open the Hotstar website in a supported browser. Hotstar says it works best on Google Chrome, Mozilla Firefox, and Safari on Windows 7 or macOS 10.2 or above. You will need Adobe Flash, unfortunately.

There is no Hotstar app for PC.

How to watch Hotstar on TV?

There are a few ways to do that. You can use the Hotstar app for Android TV, Apple TV, Amazon Fire OS, or Roku, as previously mentioned. Additionally, you can cast Hotstar from Android and iOS to a Google Chromecast connected to your TV.

Star India, which owns Hotstar, has the rights to the Indian Premier League through 2022. IPL, which usually runs from April to May each year, is available on Hotstar across all platforms. Though it used to be free for everyone earlier, IPL is now part of Hotstar Premium but still provides a 10-minute free stream for all users. Airtel and Jio users can watch IPL for free via the respective apps we talked about earlier.

Glad you asked. We have compiled a list of best movies and TV shows on Hotstar, including the likes of Toy Story and Game of Thrones. You should definitely check both those out.