How Netflix's Ghoul Came to Be: 14 Hours a Day for Over a Month in a 'Leaky, Damp, and Horrible Smelling' Place

On Friday, Netflix is set to release its second original series from India: Ghoul, a three-part horror miniseries starring the likes of Radhika Apte and Manav Kaul (Tumhari Sulu). Ghoul has been in the making for about three and a half years, but it didn’t come to life as a TV show. “At that time, it was supposed to be a film,” Apte tells Gadgets 360, and then turned into a miniseries after Netflix came on board last year. “It was a blessing in disguise,” says Kaul, because it gave them the breathing room to add a bit more backstory, something Ghoul writer-director Patrick Graham “always wanted to do”, adds Kaul. Apte concurs, thinks the added length benefits the story and feels Netflix is the best platform for it.

Graham & Co. had already filmed a portion of Ghoul when the producers, which include Anurag Kashyap and Vikramaditya Motwane’s Phantom Films, Jason Blum's Blumhouse Productions, and Ivanhoe Pictures, began talks with Netflix. The fact that Motwane was already working with Netflix on Sacred Games helped get their attention, but beyond that it was the show itself that engaged them, he notes. Motwane thinks “a certain kind of content is not actually for the movie theatres” and that the audience has moved towards streaming services, which is “great, it’s actually better. Better for storytellers, better for actors, better for a lot of people who want to make quality stuff.”

Ghoul Meaning, Release Date, Cast, and Everything Else We Know

Ghoul is set in a dystopian near-future, in an India that’s suffering from intense sectarian conflict. But the focus of the story is the basement of a covert detention centre in the middle of nowhere, which is operating in a grey legal area, holding prisoners who have no recourse to legal help. Apte plays a newly-minted interrogator named Nida Rahim who turned in her own father as an anti-government activist and arrives at the facility to draw a confession out of a feared terrorist but soon realises that a supernatural entity is trying to torment the very people who are torturing the alleged terrorists.

Graham always intended Ghoul as a horror story, he says, with the other socio-political aspects coming in later. “Dystopian future is something I've always enjoyed seeing in fiction,” he adds. “So we thought it would be a nice backdrop to this oppressive, claustrophobic story to have this fascist state behind it all. But really the main bulk of the story came first, and the atmosphere we wanted to create came after.” Graham extensively researched the origins of ghūl in Arabic folklore and drew on a couple of things: the Jinn mythology and how one can summon it but that it “may or may not be on your side”, and the supernatural powers such as being able to see people’s guilt and using that against them.

“I was very, very intrigued and very excited by the way Patrick has written the entire series, and the way he was seeing everything,” Kaul adds. “I thought this kind of horror I haven't experienced here in India – this is something absolutely new for everyone including me – and I really wanted to be part of this.” Kaul loved his character, a colonel named Sunil Dacunha, for his fervent patriotism and the strained relationship with his family, while Apte was drawn to Rahim’s belief system, the strength of her faith, and her way of thinking, which she found to be “quite the opposite of what my way of thinking is”. She adds she also liked "her investigation into her own life”, which made for an interesting arc.

The toughest part about filming Ghoul was its setting, with the cast having to spend 14 hours a day for over a month in a “leaky, damp, and horrible smelling” place with no sunlight, as Apte puts it. It was very claustrophobic, Kaul adds, and it would get grim at times being there, but it helped that they were surrounded by friends and funny people, with the actor pointing out Graham especially as one of the bright spots. The British writer-director had his own challenges, given Hindi is not a language he's well-versed in. He wrote the script in English and had the dialogues translated to Hindi as close as possible to how they were in English. Vikramaditya Motwane and Patrick Graham at the premiere for Netflix's Ghoul in Mumbai on Tuesday
Photo Credit: Netflix

“It wasn't a shock to the system being on a Hindi project set,” Graham adds, given he’s been working in India for eight years at this point, having graduated just a year before he got here. He understands the obstacle of Hindi dialogues and “directing a crew of mainly Hindi speakers” but it’s something he knows how to prepare for at this point. “As a director, I'm not asking actors to copy how I say things. We talked about it in English, how we wanted their characters, we rehearsed it. I had two people sat with me at the monitors and monitor the dialogues and make sure the intonation and how things were being said sounded correct. Those challenges were very comprehensively covered in the shoot.”

Graham also minimised the use of jump scares in Ghoul – they diffuse tension, he says, and hence you need to limit how often you rely on them – even as he accepts that they are “obviously a necessary part of the horror genre”. To him, horror is about creeping out and disturbing the audience, making them reflect on what they have seen while lying awake at night. “That to me is a great achievement of a horror story,” he adds. “Anybody can have a cat jump in through the window or have a bird hit a window pane. Jump scares are not the most challenging aspect of making a horror.” He cites one of the best horror films of 2018, Hereditary, as an example of how to judiciously use them.

Ghoul joins a select list of horror projects on Netflix, alongside the likes of the massively popular Stranger Things, due for a third season in 2019, and Hemlock Grove, which ran for three seasons from 2013-15. Meanwhile for Apte, it’s become her third Netflix production in the span of a few months through sheer coincidence. Both Lust Stories and Ghoul didn’t start off as Netflix Originals, only Sacred Games did. “What a great serendipity, I think, in a way for me,” she says. “I'm very excited, I'm loving the attention, but it wasn't by design.” Kaul loves sitting down and watching Netflix, and he’s excited to see himself on the service when he opens the app next: “I'm also there, not bad.” 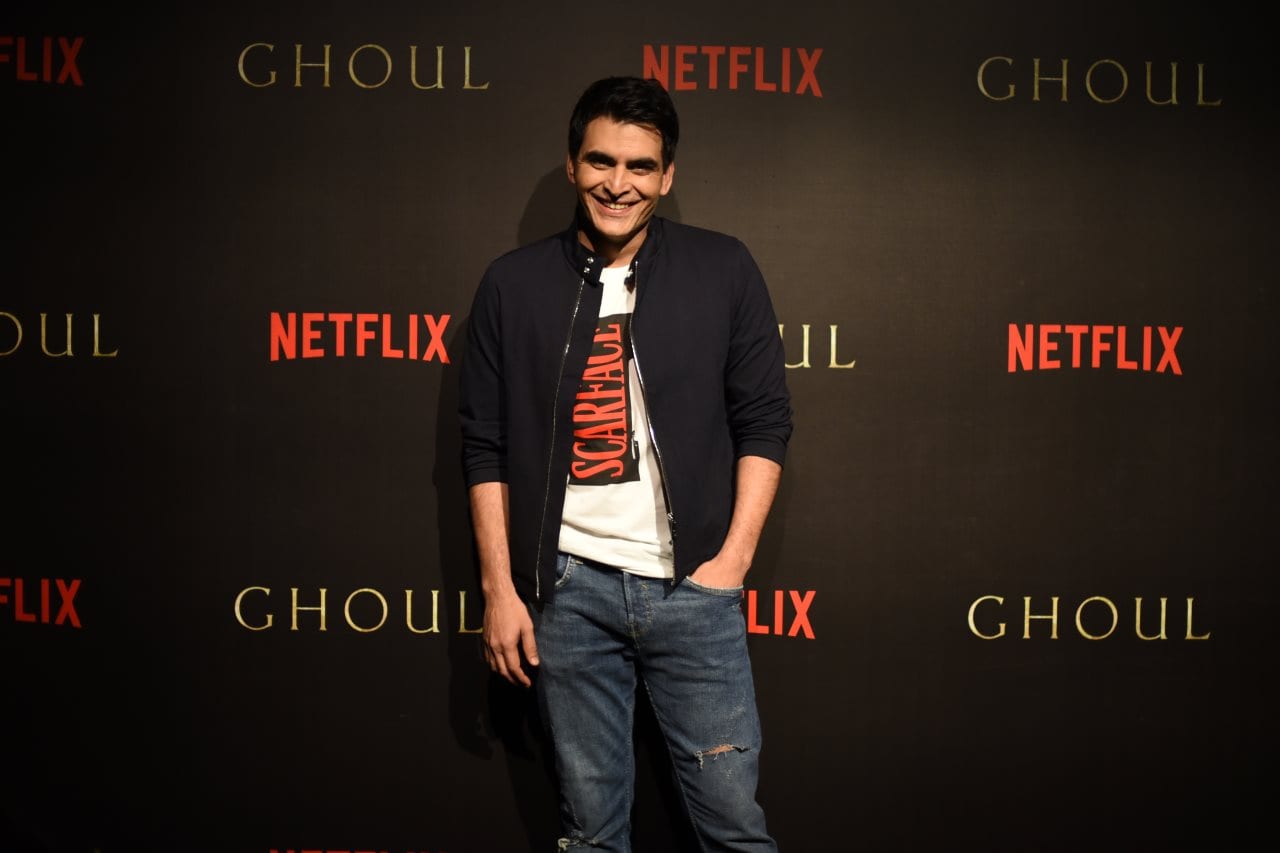 Manav Kaul at the premiere for Netflix's Ghoul in Mumbai on Tuesday
Photo Credit: Netflix

Both Apte and Kaul think it’s great that players such as Netflix are now providing new avenues for such storytelling. "I think everyone is very excited about this platform. Sacred Games' success has really made everybody believe that this is one of the biggest and best things that could happen right now,” says Apte. “The perception of Netflix is that people will watch it for its content rather than just going to watch a film because there is a hero or heroine that you like.” Kaul thinks it’s great for writers and directors who have stories to tell and now don’t have to wonder if their ideas will find an audience at the cinemas. “They just have to make absolutely nice content and it's going to be there,” he adds.

Does that include the possibility of Ghoul returning for a second season? Graham says they are “just going to play it by the ear and see what happens” and when pressed on the series’ open-ended finish he adds: “Yeah, anybody who watches it can very much realise that isn't the end of the story,” with a glance towards Motwane, which elicits a chuckle from both. Both the actors assert that they have no idea, with Kaul pointing out he hasn’t even seen the current crop. “I want to see it. Tomorrow I'm going to watch it,” he adds, with Apte saying the same thing at the same time, revealing their mutual excitement.

Ghoul is out August 24 on Netflix.