Forget Ramsay Bolton, This Might Be the Worst Game of Thrones Character Ever

If you haven’t seen season 7 episode 2 that aired July 23, turn around now - spoilers ahead.

In the closing minutes of Stormborn - the second episode of Game of Thrones season 7 - Euron Greyjoy’s thousand-ship-strong Iron fleet surprises another Iron fleet led by his niece and nephew, Yara and Theon Greyjoy, respectively. This helps to bring a little more more balance into the coming war between the Targaryen alliance and the ruling Lannisters, though the show decided to ignore how big a task building a fleet of that size would be.

But behind all that is the man himself: Euron. Introduced just last season, the new ruler of the Iron Islands has become a big player in the upcoming wars to come (we’re yet to have a proper name for that, along the lines of Robert’s Rebellion, or the War of the Five Kings). Like Cersei, he’s shown little to no love for his family - he threw his brother and previous ruler Balon Greyjoy off a bridge, and openly admitted it when Yara accused him at the Kingsmoot - and the actor behind the character, Pilou Asbæk, has further played up his approach.

Those are bold words indeed, and we got to witness some of that horror in Stormborn, as Euron let loose his wild side. Euron scared Theon so badly that he momentarily lapsed back into his Reek persona, surely a sign of PTSD brought about Ramsay’s doing. In case you forgot, Ramsay tortured Theon for multiple seasons after capturing him, including cutting off his penis and giving him a new identity as a servant called Reek.

Before that, Euron dispatched two of the Sand Snakes - Obara and Nymeria - and he also overpowered Yara in single combat. And with the ruler of Dorne, Ellaria Sand, captured along with her daughter Tyene, Euron can present two challengers to the throne to Cersei as the gift he promised in the earlier episode. 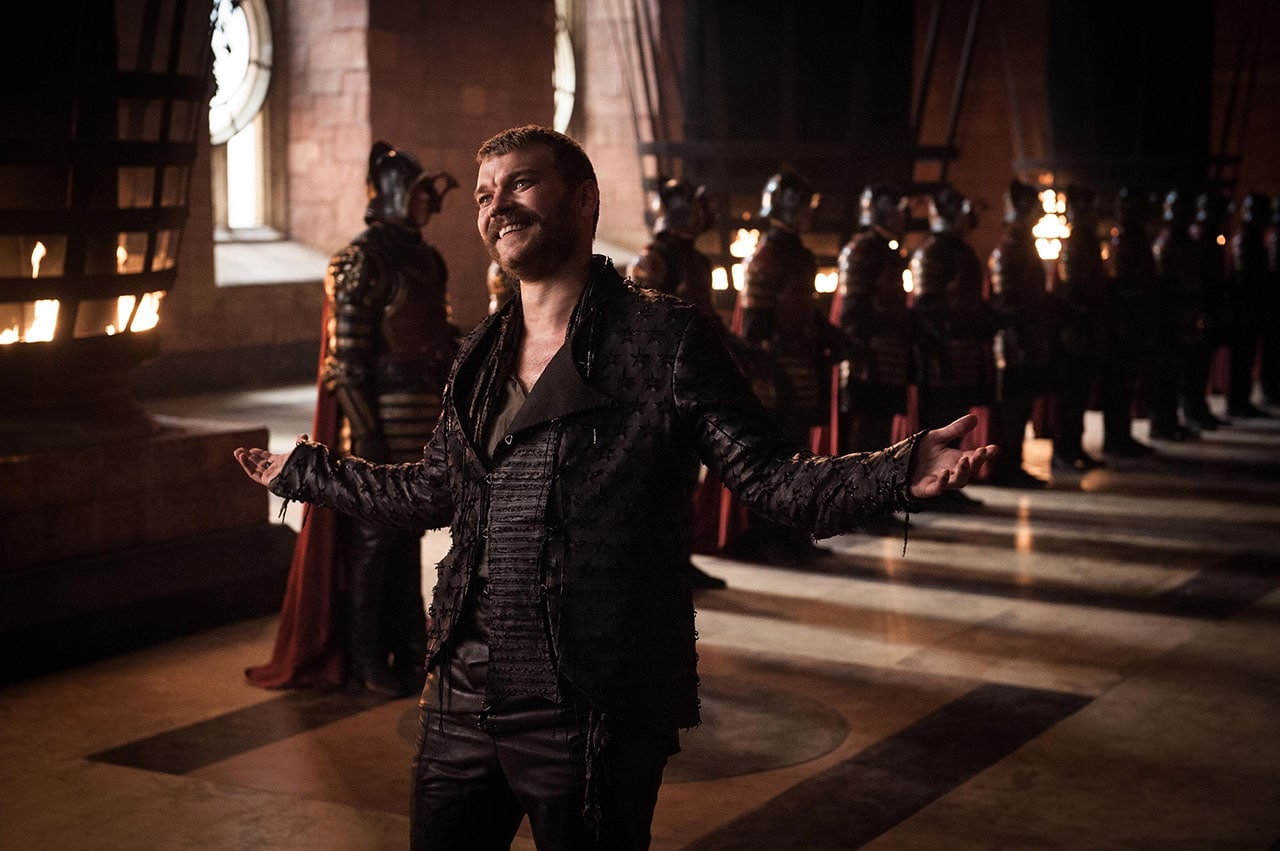 But what is Euron’s story?
Euron is the youngest of the three Greyjoy brothers: Aeron, Balon and himself. That’s a big change from the books, where they have another brother in Victarion, and a dead brother in Urrigon. The show has also changed in the order in which they have been born, with the ages of the actors implying that Aeron is the oldest and Euron the youngest. It all seems to be in an effort to simplify the storyline.

Years before the show began, then-ruler Balon declared himself King of the Iron Islands and rose in rebellion against King Robert. Though Euron managed to secure early victories - he burned the entire Lannister fleet at Lannisport - the Greyjoy rebellion was eventually crushed. Two of Balon’s sons were killed in combat, and the last remaining one - Theon - was sent to live as a ward with Ned Stark in Winterfell.

Euron went into exile following that, as he tells Cersei and Jaime in the season opener, and he became a pirate on the open seas. His personality has thus been shaped a lot by those years, and he’s much more charismatic than the usual stern approach of the Ironborn. He returned from exile in season six to kill his brother Balon, and then won the support of the Ironborn to become their next king, which kick-started the events that led to Iron Islands splitting their loyalties in two.

Game of Thrones Season 7 Episode 2: Did You Catch This Callback to GoT Season 1?

In the books, upon returning from his exile, Euron claims to have found a horn that can bend dragons to his will. But the show has opted to do away with any mention of it even if it does exist, and Euron’s claim to power has been driven by his ability to deliver what he claims to be “the greatest armada Westeros has ever seen”.

And the man delivers on his words in a stylistic and fiery fashion in Stormborn, laying waste to the entire fleet that Danaerys dispatched to Dorne. It’s an unexpected first blow in what initially looked like an one-sided war. It does seem odd that Varys’ little birds didn’t mention a thousand ships sailing into King’s Landing, but it’s the geography that complicates it even more.

The Battle of the Greyjoys could’ve been avoided
At the end of season six, Daenerys Targaryen leaves Meereen and is shown sailing towards Westeros with the full might of her armies. If you look closely, you can spot the banners of House Tyrell and House Martell among them, which indicated that the fleet was much closer to Westeros than Essos, as it’d have been stupid for the two great houses to sail to Essos to only sail right back.

Owing to how the continent is shaped, Sunspear - the capital of Dorne - is the closest southern landing port from Essos. To get to Dragonstone, you have to pass the Steptones, which are assumed to be the remnants of an ancient bridge that connected the two continents. If the Targaryen alliance had planned ahead, they could’ve simply landed some ships for the Dornishmen back then.

In getting everyone first to Dragonstone, and then dispatching some of the ships back to Dorne, Daenerys and her allies squandered valuable time. Their mistake was compounded further by failing to get word of Euron’s fleet, and sailing right into them as they were leaving King’s Landing. Now that the show is completely into uncharted territory with George RR Martin still working on the sixth book, it seems the showrunners David Benioff and DB Weiss are more focused on the big picture, rather than these kinds of details.

It may effectively serve the show’s purpose, but it does make things a tad unbelievable. Or maybe Tyrion isn’t just as clever as we thought, and Daenerys should be listening to Lady Olenna after all.

Further reading: Game of Thrones, Game of Thrones season 7, HBO
Akhil Arora Email Akhil Akhil Arora covers entertainment for Gadgets 360, interviewing stars such as Christian Bale and Anurag Kashyap, covering series premieres, product and service launches across the globe, and looking at American blockbusters and Indian dramas from a global socio-political and feminist perspective. As a Rotten Tomatoes-certified film critic, Akhil has reviewed over 150 movies and TV shows in over half a decade at Gadgets 360. When he is not completely caught up with new film and TV releases, Akhil ...More
Jio Phone Will Force Rival Telcos to Protect Subscribers: Jefferies
Xiaomi Mi 5X With Dual Rear Cameras Teased in New Video Ahead of Wednesday Launch