Ever since the beginning of season 7, Game of Thrones has been chipping away at the strengths of Daenerys Targaryen, in a bid to level the playing field or push her towards giving into her impulsive side. She lost her Dornish and Highgarden allies early on, which provoked her into riding Drogon and setting fire to large swathes of the Lannister army and the forces of their allies, now known as the terribly-named ‘Loot Train Attack'. She then lost her dragon Viserion late in season 7, as she saved The Magnificent Seven — Jon Snow & Co. — who had been surrounded by the Army of the Dead. And then in last week's episode “The Long Night”, she lost much of the Dothraki in addition to many of the Unsullied. This trend continues in Game of Thrones season 8 episode 4.

Spoilers ahead for Game of Thrones season 8 episode 4, “The Last of the Starks”.

The third episode also saw the death of her protector Jorah Mormont, which was by far the most personal loss for Dany since Khal Drogo in season 1. The importance of that was underscored by the opening moments of Game of Thrones season 8 episode 4, as the camera panned across Jorah's body on a pyre as Dany prepared to say goodbye. And though we didn't know it at the time, that would set the tone for the rest of the episode, with the personal costs racking up for Dany in her dragon, Rhaegal, and her trusted advisor, Missandei. By the end of the episode, it felt like Dany was at her breaking point, ready to do whatever it takes to get rid of her enemies.

Game of Thrones has always hinted that there's been some of her father — Mad King Aerys — in Dany, since her early days in Meereen. Having taken the city in season 4, she ordered the death of over a hundred slave masters in return for the slave children that were crucified and used as mile posts for when she marched towards Meereen. Her advisors — Ser Barristan Selmy, namely — then cautioned her against it, but she went ahead with it anyway. And it was Barristan, who had served in Aerys' Kingsguard, who first compared Dany to her father, warning her that her belief of rightful justice could make powerful enemies, ones that eventually brought an untimely end to Aerys' reign and most of the Targaryen family. 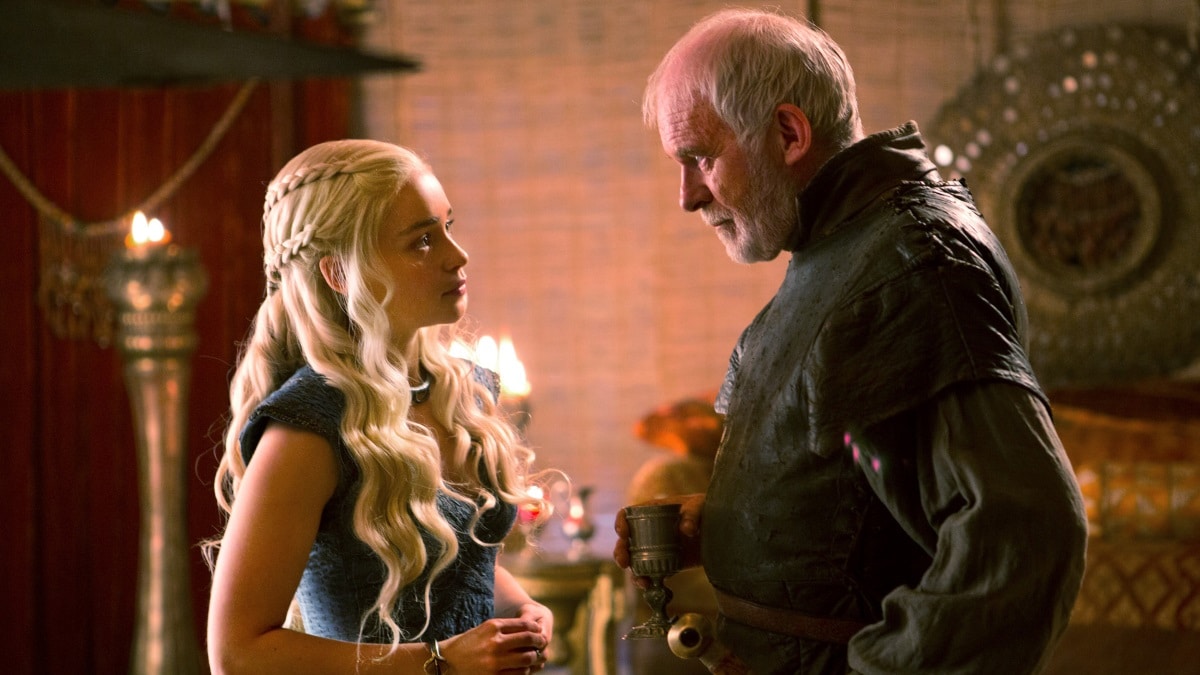 While Barristan is no longer around to council her and remind her, it's fallen to the likes of Tyrion and Varys to “check her worst impulses”, as the Lannister dwarf says in Game of Thrones season 8 episode 4. But Varys isn't sure she's the right ruler anymore, having tried and failed to caution her about trying to lay siege to King's Landing, as the Unsullied leader Grey Worm suggested. And now that he knows about the true parentage of Jon Snow — Dany asked Jon to keep it quiet, but he told his family and then Sansa told Tyrion, which means it'll be an open secret soon — Varys thinks they have a better option to choose from. Tyrion reminds him that what they are discussing is treason, but Varys is, as always, only concerned about what's good for the realm.

Tyrion thinks he has a solution on his hands: marry Jon and Dany, so they can rule as king and queen together. Varys is the first one in a long time to point out that Dany is Jon's aunt, but Tyrion remarks that the Targaryens have never had a problem with that. Yeah, but Jon is from the North, Varys points out. Tyrion thinks Jon would be able to do their job for them — “check her worst impulses” — but Varys notes that Tyrion has largely failed at doing so himself. Dany is the more powerful one and she will bend Jon to her will. We see a bit of that at Winterfell early in Game of Thrones season 8 episode 4, when Jon goes against Sansa, who's trying to caution that their troops are tired and need time to recuperate, having just fought the Army of the Dead.

Of course, part of that stems from the fact that Dany and Sansa haven't seen eye-to-eye at all since the Dragon Queen stepped foot in the home of the Starks. It doesn't help that she legitimises Gendry as a Baratheon, making him Lord of the Storm's End in episode 4, while ignoring what Sansa wants for the North as a whole. The Winterfell gathering also shows another important facet, in that unlike everyone else who's celebrating with their friends and family, Dany is a lot more alone. She's clearly not at home around these people, which is why she gets up and walks away, but it's also not clear what home is really for her. Will she be happy even once she sits the Iron Throne, hypothetically? 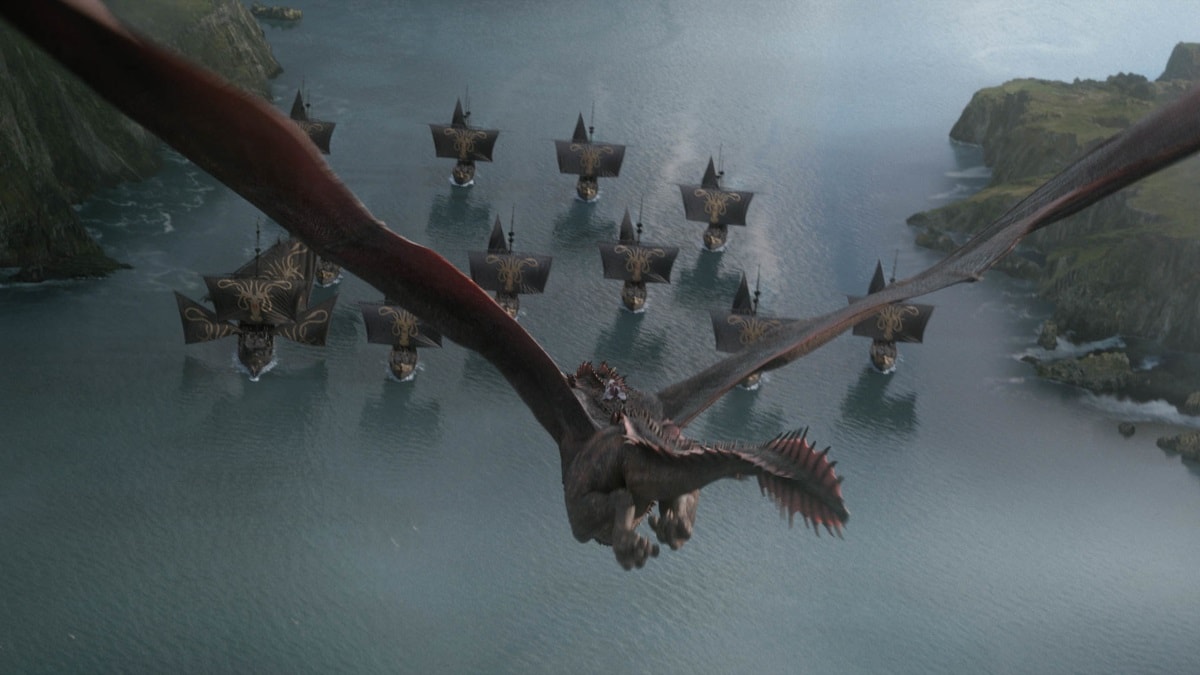 Drogon is all alone too. Why does no one think about that?
Photo Credit: HBO

Unfortunately, her path to the throne isn't clear at all. In fact, Game of Thrones season 8 episode 4 muddied it a lot more. While the Stark-Targaryen alliance was busy fighting the Army of the Dead, Qyburn has gotten a lot more of those Scorpions made, that long-range weapon that's shaped like a giant crossbow. They have been fitted across the walls of King's Landing and even on the ships of Euron Greyjoy's fleet, which comes out of nowhere and lays waste to the Targaryen fleet trying to get to Dragonstone in this episode. What use are two dragons if you can't use them for aerial reconnaissance? Game of Thrones makes it look like as if the fleet was hiding behind some rocks, but surely that's useless if you're in the air?

Anyway, the show that gave up logic in season 7 isn't bothered, as their goal is simple: take the dragon Rhaegal off the board. And it's what Euron & Co. achieve, attacking it furiously with giant bolts and sending it to sleep with the fishes in no time. Enraged, Dany naturally thinks of retaliating with the help of Drogon, but seeing the sheer number of Scorpions the fleet has, she relents and turns around. Euron then takes aim on the unguarded Targaryen fleet, which is shattered to pieces and left for ruin. And in the ensuing chaos, as Tyrion somehow manages to swim ashore, Missandei is captured by Euron and taken back to King's Landing.

Dany then travels with her remaining advisors and a small group of Unsullied to demand Cersei's unconditional surrender. It's one thing to display a show of force, like Dany did the last time she came to King's Landing, but this seems quite pathetic sadly. Is Cersei really supposed to be bothered with the number of Unsullied in front of her? Why should be she fearful of the words spewed by her brother Tyrion, that her reign has come to an end? Look at where Drogon is standing, he's so far back because of the Scorpions. The fact that Cersei spares Tyrion's life seems more of a narrative thing on the show's part than some in-world logic, but it's clear that Missandei was never going to make it. Cersei is a monster, no matter how much Tyrion tries to sugar-coat the truth in order to save someone. 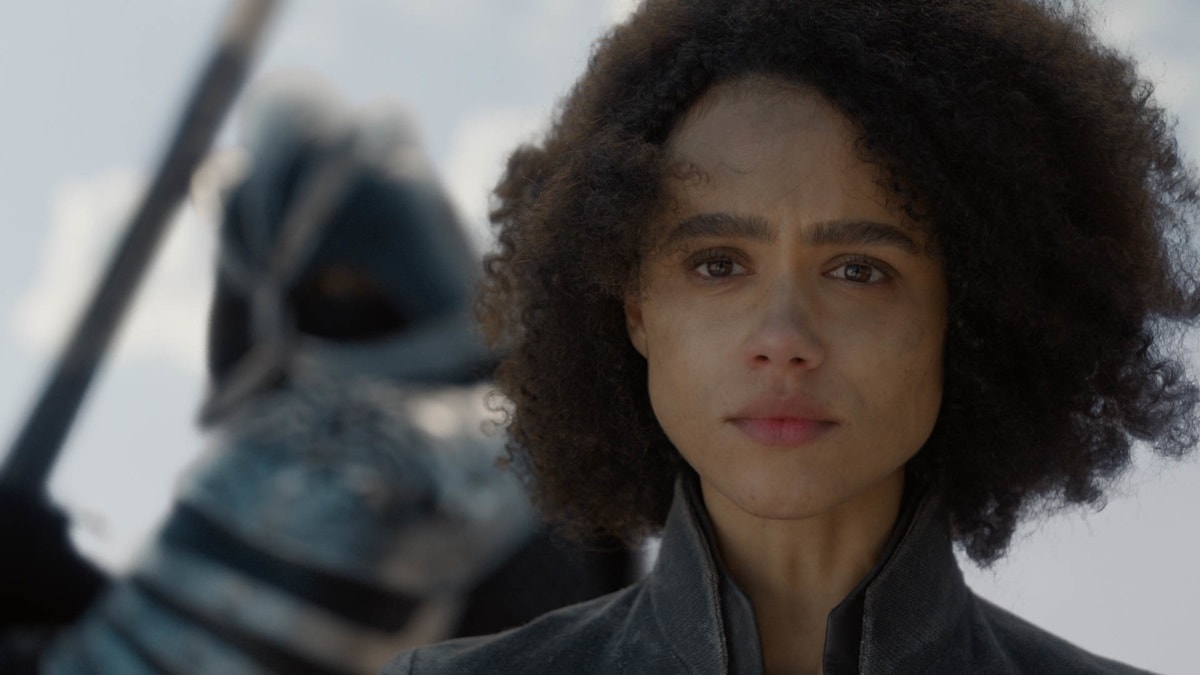 The end of the line
Photo Credit: HBO

Missandei's death naturally has a big impact on Dany, who recently lost both Jorah and another one of her dragon children, but it's the last words of her translator-advisor that convey what could happen in the future. Before Cersei has her killed by The Mountain, she offers Missandei any last words, and the Naath native picks a curious one: dracarys, which is High Valyrian for dragonfire. But she doesn't mean it literally though. What Missandei wants is for her enemies to be burnt and destroyed in response to her execution. It's more of a signal to Dany, whom she met in season 3 when the Dragon Queen freed her and the Unsullied from the slave masters, by uttering the same word after she had shocked everyone that she knew High Valyrian and had been pretending to know otherwise.

It serves as a nice call-back to that moment, but it has greater significance for what's to come in Game of Thrones season 8. The look on Dany's face, as she turns around after seeing Missandei's head chopped off, suggests she's going to do what she wants from here on. She was anyway fed up with Tyrion, whom she felt had given her bad advice repeatedly, and it was him along with Varys who had asked her to demand Cersei's unconditional surrender earlier in episode 4. That failed spectacularly, with Cersei emerging as the clear winner. Meanwhile, the personal costs have alarmingly racked up for Dany, who has lost nearly everyone she cared for, except Jon. The path is laid for Dany to turn into the Mad Queen, who will no doubt want to ‘burn them all' in the wake of recent events.

Game of Thrones season 8, episode 4 is available on Hotstar. On TV, it will air Tuesday 10pm on Star World.

Further reading: Game of Thrones, Game of Thrones season 8, HBO, Hotstar
Akhil Arora Email Akhil Akhil identifies himself as a stickler for detail and accuracy, and strongly believes that robots will one day take over most human jobs. In his free time, you will find Akhil beating the computer at EA Sports FIFA or streaming new highly-rated TV series. More
Facebook 'Labels' Users' Posts by Hand, Raising Privacy Issues
Uber, Lyft Drivers in US to Strike Ahead of Uber IPO