The first few episodes of a new Game of Thrones season always struggle with having to set up future conflicts, which is why things really get going by the midway point which was this week. The fifth episode was powerful and jam-packed, with quite a few big moments that we will talk about below.

Editor's note: spoilers below for fifth episode of Game of Thrones' sixth season.

Things started at Mole's Town, with Sansa Stark meeting Littlefinger on the outskirts of Castle Black. She brought Brienne for company, and then went on to shame the scheming Lord Baelish for everything he had done to her - "You freed me from the monsters who murdered my family, and you gave me to other monsters who murdered my family", she says in conclusion for her point. It's rare that Littlefinger is taken aback like this, but he's struggling for words. He does eventually get in a word, informing Sansa that her uncle Brynden "Blackfish" Tully has taken Riverrun back from the Freys. And should she need the Blackfish's services in retaking the North, he could be of help, adding Jon is only "half-brother".

Across the Narrow Sea, the other Stark sister - or rather a girl/ no one - is still practicing and repeatedly losing to the Waif, who derives much joy in beating up the young apprentice. Afterwards, Jaqen H'ghar tells her the history of the Faceless Men and sends her out to scout a new target - an actress called Lady Crane - at a stage performance. The play is a re-enactment of the events Arya is personally invested in - from the beheading of her father to the treacherous treatment of Sansa - but a girl is not supposed to have a past. Or questions, as Jaqen reminds her when she asks about Lady Crane and who wants her dead. She does do a good job of blending in, and finding out the best way to end her target's life - the rum.

Then came the episode's first big moment, inside another one of Bran's visions. The Children of the Forest, with Leaf (who had rescued Bran at the end of season four) among them, have a human captive. She goes up to him and slowly drives an obsidian dagger straight through his chest, converting him into a White Walker. That is a big revelation - the fact that the Children of the Forest are responsible for the first White Walkers - as Leaf admits to when Bran comes out of his vision. They had to do it because they were fighting the First Men and needed protection, she explains. That means Bran just went back 10-12,000 years into the past. 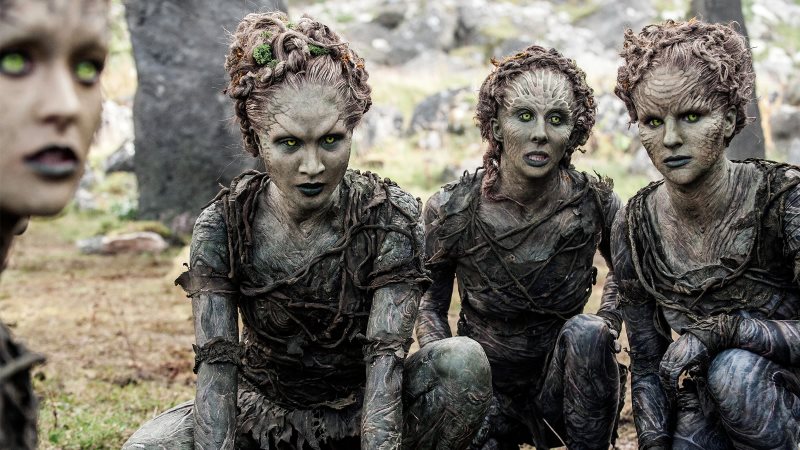 But the show has no time to waste, and takes us to the Iron Islands as the Kingsmoot takes place. Yara Greyjoy makes her claim, and Theon - albeit after a little hesitation - adds to that strength, seeing as he is Balon Grejoy's last living son. Their uncle Euron gate crashes the short-lived party, belittles and ridicules Theon for supporting a woman by calling him a eunuch, and nonchalantly admits to the murder of the last ruler, his brother, when Yara accuses him of Balon's death. No one loved Balon, Euron says, and he led us into wars we couldn't win. And he goes on to promise his fellow Ironborn the Seven Kingdoms, with the help of his world knowledge, his fleet and a marriage proposal to Daenerys Targaryen. Yara, Theon and their friends escape with the existing fleet as Euron is submerged into salt water to be anointed king of the Iron Islands. After ignoring them for a couple of seasons, it remains to be seen how much importance the Ironborn will have in the big picture.

Time for a short visit to the woman Euron plans to marry, the Mother of Dragons. Having burnt the Vaes Dothrak widow temple and all the khals with it to the ground last time around, Dany has regained her clothes and her affection for Jorah, the relentless servant. But he recoils when she steps towards him, revealing the disease creeping up his arm. She is devastated by the news, and cries sorrowful tears. Thankfully, she now understands the undying loyalty and importance of a soldier such as Jorah the Andal, and commands him to scour the Known World for a cure. When I take on the Seven Kingdoms, she says, I need you by my side. She then leaves Vaes Dothrak with her new army of the Dothraki, as Jorah departs another way.

Meanwhile in her temporary kingdom, a fragile peace has taken hold, Varys notes, when Grey Worm reports the impossibly low death numbers since Tyrion's offer of money and women to the slave masters. But in the Mhysa's absence, they need a spokesperson who will handle public relations. Step forward Kinvara, High Priestess of the Red Temple of Volantis, whose title means she outranks Melisandre. While Tyrion is more accepting of her services, Varys is highly sceptical of any positive results, knowing full well how Melisandre's advice ran Stannis into the ground. Everything is the Lord's will, but men and women make mistakes, Kinvara says. She then goes on to talk about Varys' past, and how he was deprived of his man parts. She asks him if he knows what he heard from beyond the flames, rendering Varys speechless. 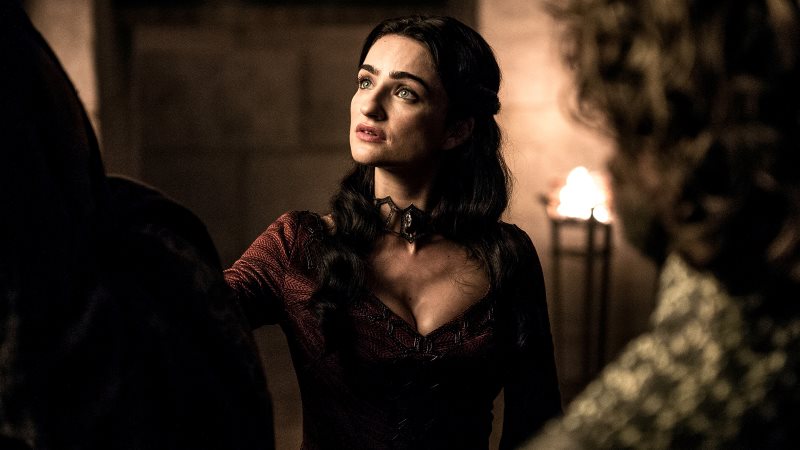 Back to beyond the wall, where Bran sneaks into a vision without telling the resting three-eyed raven. He comes across the army of the dead, and walks through them to find the Night's King and his companions on their horses, waiting. The leader of the White Walkers sees him, and Bran turns around to find all the wights staring at him. He spins around to find the Night's King right behind him, who grabs hold of Bran's hand just as he exits the vision. The three-eyed raven reprimands Bran to say he touched you, he refuses, but as the Stark boy peels back his sleeve, he finds a huge blue mark. The wise old man says that means the White Walkers know their location, and the spell on the giant weirwood tree is now broken. Well, that's just great.

It's time for an uncalled for distraction, as we head to Castle Black where Jon and the team are plotting how to overthrow the Boltons. They have lost a couple of the big houses to their rivals, but the North remembers, says Sansa. She then blurts out that the Tullys have control of Riverrun again, which surprises everyone, and she has to lie when Jon asks how she knows. That is good, Ser Davos notes, and the gang leave Castle Black all together, headed in different directions. Tormund throws one last look (this time with a grin!) at Brienne, who has no interest and also isn't happy with leaving Sansa.

Meera and Hodor are packing to leave the tree as commanded but uh oh, the Night's King and his followers are already here. Did they teleport themselves or something? It's up to the Children of the Forest to slow them down, by launching half a dozen cool grenades into the crowd. A ring of fire around the entrance helps too, though it does nothing to stop the ice-cool White Walkers. Hodor goes into panic mode at the worst moment possible, while Bran and the three-eyed raven are being entirely unhelpful looking at a young Ned Stark leave Winterfell for the Vale. No amount of violent shaking by Meera is enough to bring him back, though her shouting does reach him. She begs him to control Hodor so he can help them - she's seen Bran do that in the past - and when the three-eyed raven asks him to listen, he compels Hodor just at the right moment. 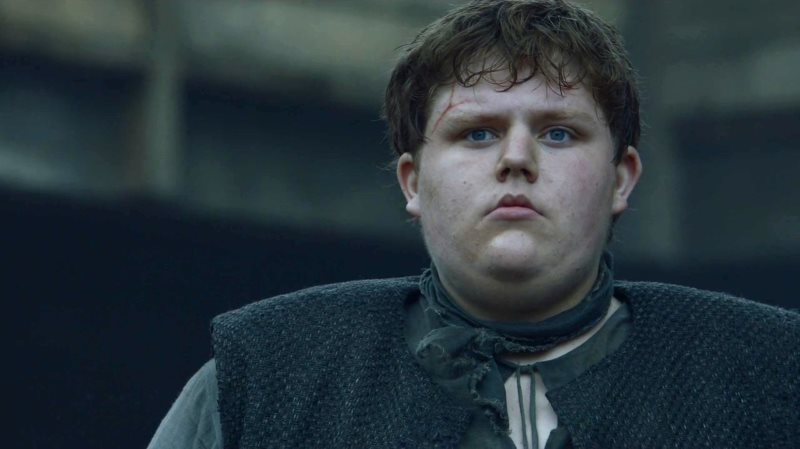 (Also see: Game of Thrones Spoilers? Who Cares, Now That Book Snobs Aren't the Ones Sharing Them.)

Leaf, Meera and Hodor with Bran make a run for the back door, with hundreds of wights in pursuit. Summer, Bran's direwolf, does his best by jumping at the wights but is stabbed repeatedly to his death. (Another dead direwolf. Game of Thrones, why are you so cruel?) Over at the tree, the Night's King swings his sword to hack it and the three-eyed raven into pieces, who promptly disintegrates into a black liquid in Bran's Winterfell vision. Being rapidly approached by the army of the dead, Leaf decides to sacrifice herself with one more grenade though it does little to stem the flow. The remaining three living come across a heavy door, and Hodor pushes it open to make way for their escape. Meera proceeds to close it and Hodor slams it shut with his might.

Meera grabs the sled with Bran on it, and shouts at Hodor to "Hold the door!" Over in Bran's vision, he spins to look at the young Hodor aka Wyllis, who can't see Bran in return. His eyes turn white - as they do when someone wargs into you - and Wyllis falls to the ground frantically moving his arms about. The big, older Hodor is pushing with the full force of his back into the door, while his mother is tending to him in Winterfell of the past. Wyllis starts to shout "Hold the door!" as well - and now that Bran and Hodor are one, he can hear Meera too.

And even as the wights tear through the door to eat into his body, Hodor holds his own. Over in the past, a shaking Wyllis continues to shout "Hold the door!" over and over, which eventually shortens itself into "Hodor". Bran is stricken, but there is nothing he can do to change the past. Or can he? His future self is responsible for this, but it seems to be more of a case that everything had already been written. And just imagine Hodor's life after that point, having felt his death as a boy and now living it again.

Hodor might be gone, but his end has given fans a moment to talk about for quite some time.