If you have watched the latest episode of Game of Thrones, then you're probably an emotional wreck right now. If not, watch out because there are some pretty major spoilers that follow.

Editor's note: spoilers below for fifth episode of Game of Thrones' sixth season, the books and any other material.

Before we jump into discussing the important events of the latest episode, 'The Door', we need to go back to A Song of Ice and Fire, the novels that lay the lore for most of what you have seen on Game of Thrones. Let's jump 12,000 years into the past, to a time when mankind was beginning to move westward from the continent of Essos, to the land of Westeros.

Back then, a non-human race lived in Westeros. They were called the Children of the Forest by the arriving men, who in turn called themselves the First Men. To get to Westeros, the First Men used a land bridge called the Arm of Dorne that connected the two continents. For their livelihood, they started to chop down the forests for agriculture and livelihood. That also included the Children's sacred weirwood trees (the giant white trees with faces in them), which angered them to the extent that they retaliated.

The Children used magic to raise the sea, sweeping away the Arm of Dorne in the process. But it wasn't enough, and thus started the wars of the First Men and the Children of the Forest.

Mankind's strength in numbers, access to better weapon technology and use of horses in battle gave them an obvious advantage which drove the Children to desperation for their survival. This brings us to Bran's first vision in the episode, as the three-eyed raven takes him to a giant weirwood tree, somewhere around this time. 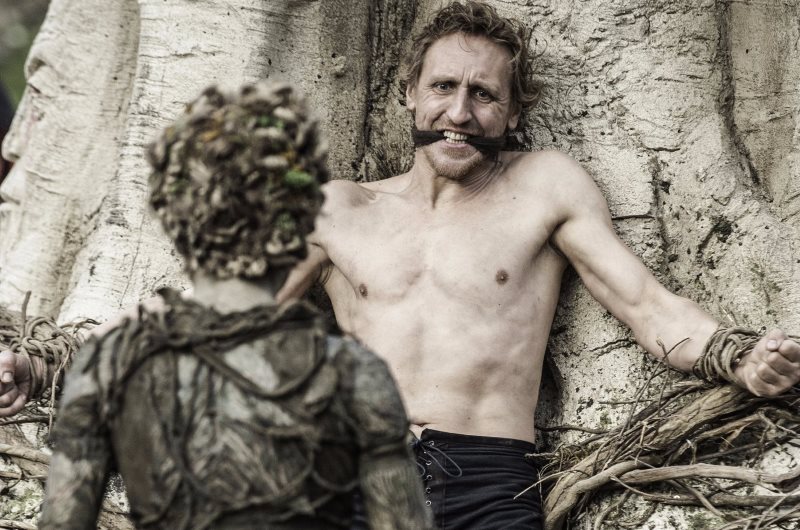 The Children - notably among them Leaf, who rescued Bran at the end of season four - have a man in their captivity, tied to a tree. (This also shows how long the Children live.) Leaf takes an obsidian dagger - also known as dragonglass - in her hand and proceeds to drive it straight through the human's chest and possibly the heart as well. Instead of dropping dead, his eyes turn bright blue - and you guessed it - and he becomes one of the first White Walkers.

That was the first bombshell in the latest episode - the fact that the Children of the Forest are responsible for the creation of White Walkers. But as we now know, the move backfired on them. So it's sort of like a Frankenstein situation, but clearly much worse because a) it's really hard to kill one of them; b) they want to kill everyone in sight; and c) they can raise the dead as minions to serve them.

The First Men and the Children continued their wars for thousands of years until it culminated in The Pact, a peace treaty signed with the scales not tipping in anyone's favour and the two races having tired of the bloodshed.

Okay wait, what about the White Walkers? What's the deal with them?
Two thousand years after the peace took hold came the Long Night, a winter that lasted an entire generation and is now remembered just through stories, as a legend. With crops disappearing, people starving, and coldness stretching forever, the White Walkers decided to descend upon Westeros from the farthest north, the same place where they are currently holed up.

Seeing how the Walkers could reanimate the dead for support, the First Men and the Children decided to join hands and fight this hellish situation together - and it came to be known as the War for Dawn. They managed to defeat the White Walkers and pushed them back where they came from - the farthest north.

This war and its aftermath is really crucial, as it links into two things of importance in the world we know. (It may sound like a detour, but bear with us and we promise to link it to the episode's events.) 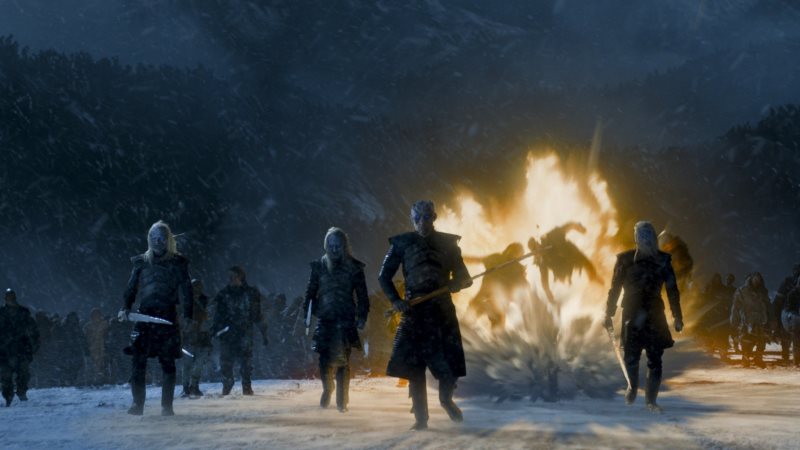 First of those is the prophecy of Azor Ahai aka The Prince That Was Promised aka What Melisandre Keeps Talking About. The holy texts of R'hllor, the Lord of Light, and those who follow him believe that a hero by that name, wielding a sword called Lightbringer - it glowed with light and was on fire - was responsible for driving away that really long and grim darkness. And the text also says that there will be another Long Night, and hence another Azor Ahai will step forward to lead humanity to victory. That's why she has been on the search for The Prince: first she thought it was Stannis until his fall last season, and now she thinks it's Jon Snow. High Priestess Kinvara who was introduced in yesterday's episode, on the other hand, believes it's Daenerys and not Jon. These are all stories though, so who knows if any of this will happen when the White Walkers make their way south (finally).

That brings you to the second point: the creation of The Wall. After driving back the White Walkers, the First Men - with the help of the Children's magic spells - constructed a giant ice wall over 700 feet high to ward off the ice people from ever crossing it. And they also founded the Night's Watch, an order of men whose job is to guard the wall and protect the realms of men if the White Walkers were to have another go. It is said Brandon Stark - also known as Bran the Builder - who lived eight thousand years ago and is considered by some as the founder of House Stark, was chiefly responsible for The Wall.

Similar spells to the ones used on The Wall were also protecting (our) Bran & Co. under the giant weirwood tree until the Stark boy went and did a really stupid thing.

Thanks for coming back to the point. Now what happened in that second vision of his, the one where the Night's King held Bran's hand?
Right so this is where the books aren't much of help, primarily because the show has moved beyond them in most storylines. In this week's Inside the Episode segment, showrunner and writer David Benioff said: "He's not the three-eyed raven yet, so he does not have control over these visions like the three-eyed raven does. But the first time someone sees him in these visions, it's the Night King [sic] which is part of the tragic mistake here is that if the three-eyed raven had been with him, things would have ended much differently." 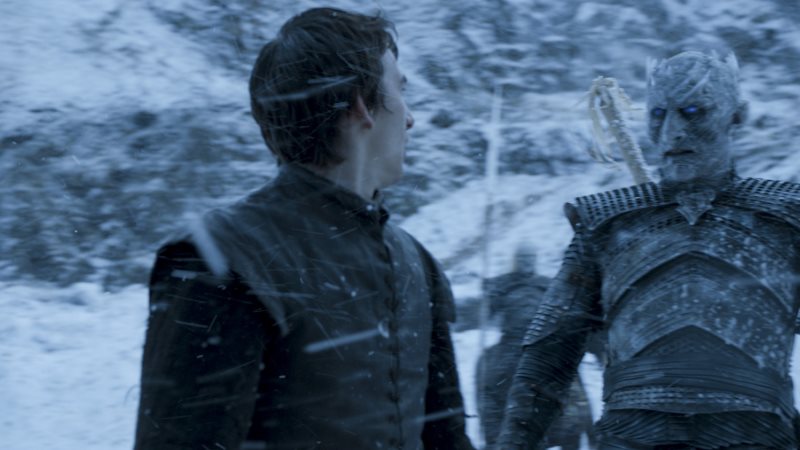 So if you've been wondering if the Night's King is capable of something special, you're on the wrong path. As you can tell from Benioff's words, there is clearly more to the art of visioning than just grabbing a branch of a weirwood tree. And Bran makes a big mistake, by not only revealing himself but also giving away their secret location under the tree.

Yes, the cave battle finally! What happened to poor Hodor?
Either it was creative liberty to drive up the drama, or The Night's King and his White Walker buddies clearly wasted no time in making their way to the three-eyed raven's underground crib. We are going to chalk it up to the former, otherwise we are throwing teleportation into the mix of dragons, spells, blood magic, immunity to fire, zombies, ice people, greensight, and possibly even time travel.

The last of those is what the episode's final scene hinted at - when Hodor is asked to hold the door by Meera Reed, as she pulls the cart with Bran away from the hundreds of wights. The eldest Stark son is still in his visions - now without the three-eyed raven who was hacked to death by the Night's King - and we are unsure why he is watching a seemingly mundane memory of his father leaving for the Vale instead of helping his friends.

That is until he spins around and looks at young Hodor aka Wyllis, who is probably the only one who can see Bran in return in Winterfell of the past, because he's about to control him. His eyelids turn white, which is exactly what happens when someone wargs into you. Bran has done this previously with adult Hodor, but he's never controlled someone while himself being in the past. 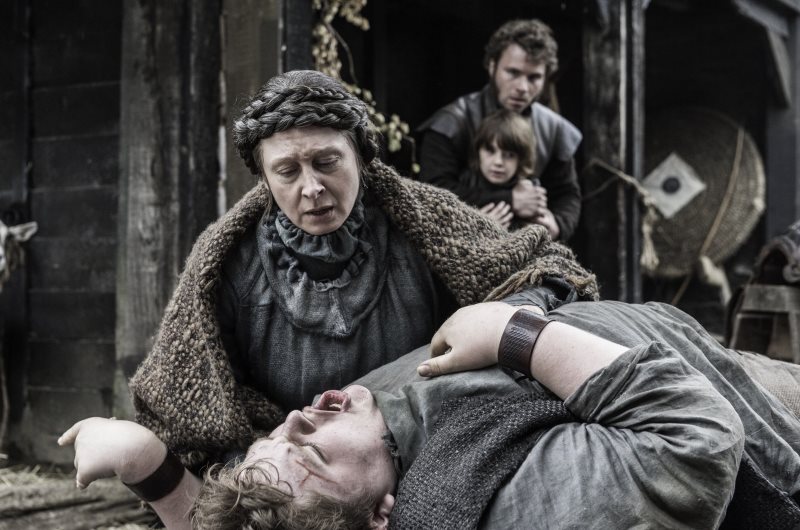 But Wyllis has seen and felt his own slow death at the hands of the wights, and his only memories from that traumatic event are the words "Hold the door" which he starts to shout over and over. In controlling the actions of adult Hodor by warging into his younger self while being in a vision of the past, Bran Stark accidentally ends up screwing with Wyllis' brain which causes him to become simple-minded aka Hodor. The intensity of witnessing his own death moment "short-circuited" young Wyllis, according to DB Weiss, showrunner and writer.

Some have taken this as proof that Bran can meddle with the past, and that the words of the three-eyed raven ("The past is already written. The ink is dry.") are indeed false. But if you look at this closely, it's quite plain to see this isn't the case (at least not yet). By unwillingly inviting the Night's King to the cave - and the events leading up to it - Bran in fact only plays his part in ensuring the events happen like they already did. We have known the character as Hodor since the beginning, and this episode showed us how that name came to be.

There aren't any changes as far as we are concerned - the ink is dry, for now - except Game of Thrones has managed to outdo its penchant for becoming a topic of conversation.

Further reading: Game of Thrones, Game of Thrones season 6, HBO, Hotstar
Akhil Arora Email Akhil Akhil identifies himself as a stickler for detail and accuracy, and strongly believes that robots will one day take over most human jobs. In his free time, you will find Akhil beating the computer at EA Sports FIFA or streaming new highly-rated TV series. More
Sony Says Deadly Japan Quakes Will Shake Profit, Sales
Apple Asks US Supreme Court to Rule Against Samsung Over Patents