How Foundation’s New Emperor Cleon Clones — Dawn, Day, and Dusk — Came to Be

And Lee Pace’s approach to playing Brother Day, influenced by sci-fi and real-life. 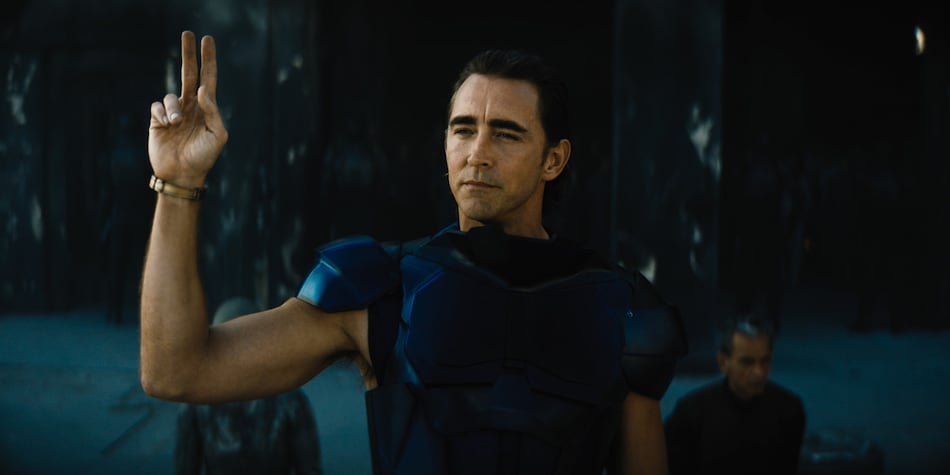 Foundation, the Apple TV+ series that begins September 24, makes a lot of changes to Isaac Asimov's books that it adapts. Among those is the creation of a genetic dynasty that rules the Galactic Empire. Emperor Cleon the First — he appears briefly in the books — decides he's going to clone himself over and over, so he can forever rule the galaxy. At any one time, three Cleon clones exist, to guide one another and to groom the next era. There's the youngest Dawn, the middle ruler Day, and the eldest Dusk. Why did Foundation series creator David S. Goyer decide on this plot device?

“It's a perfect example of how we approached the adaptation,” Goyer said in a video conference press meet last week. “In the books, the Empire has existed on 10,000 worlds for over 10,000 years. They're powerful, they're resistant to change. They're rigid and so I tried to think about what's the vision? What's the theme? What is Asimov talking about? How do I embody that in a character? ‘One man cloning himself over and over again and imposing his ego upon an entire galaxy.'

“That was a plot device that then led me to all sorts of wonderful character moments. With the Cleons because they're all — in some ways, the show is also a show about legacy — desperate to individuate, they're all desperate to leave their mark on the galaxy, and the tragedy is that they're all living in the shadow of Cleon the First. So even though they're monsters, it allowed me to tell some stories that also possibly makes the audience empathise with them.”

Lee Pace, who has made a habit of playing immortal or mad rulers — he was Thranduil the Elvenking in The Hobbit trilogy, and also Ronan the Accuser in Guardians of the Galaxy — essays the role of Brother Day. The Cleon clones call one another Brothers, even though they are the same person. Pace studied all sorts of real-life rulers, from the Roman emperors to the Incas to the Chinese dynasties. His favourite of all was Haile Selassie, the last emperor of Ethiopia.

“I'm not really playing a man, I'm playing a series of men, who for a certain time in their life, inherit the role of the Emperor of the Galaxy, which is an absurd idea that one person could have control over the entire galaxy, have power of life and death over trillions of people, control which planets prosper, which ones suffer,” Pace said. “And so, when approaching a character as absurdly abstract as that, I wanted to bring diverse opinions to it.

From Foundation to Kota Factory, What to Watch in September

“Doing research is one of my favourite things I get to do as an actor. I looked at obviously, the Roman emperors that inspired Isaac Asimov to write this story. But I also looked at the Chinese dynasties. I looked at Incas, the Emperors were basically gods to them. I had a really great read. [Ryszard] Kapuściński's book The Emperor, about the last emperor of Ethiopia, Haile Selassie. I found him particularly interesting and looked at him for one of the Emperors that I play this season.”

“What I think is so interesting about this riddle posed about inherited power is not that office of a God they hold,” Pace added. “It's these individuals who are approaching it and I think very much about an actor approaching a role. Here's Day looking at Dawn, who is the youngest of the dynasty, and I'm saying, ‘Here are the lines, this is the blocking. Here are the costumes that you will wear. And it is imperative for the safety of the galaxy that you are exactly like me that you behave exactly like me, that you are an identical copy of me, once you inherit this extraordinary power.'

Some fans of Foundation the books might be perturbed by the changes, but Pace isn't too bothered. He believes they respect the book, but that the Apple TV+ series is its own thing — it's not meant to be a line-by-line adaptation, after all.

“I think anything that I bring to it is right, there's nothing to get right in a way with it,” Pace said. “It's not a book report this show. We're not trying to, page by page, say ‘This is Foundation.' We respect it. I think it is a sign of respect to Isaac Asimov, and the door that he opened to many writers, Ursula K. Le Guin, [Frank Herbert's] Dune, and [Dan Simmons'] Hyperion. So much of the science fiction that I read. So, I am kind of casting a really broad net with this character, and it's up to David Goyer to edit me and keep me in line.”