After the death of Carrie Fisher late last year, Star Wars fans wondered how Princess Leia – now General Organa – would be included in Episode IX. Disney had ruled out any use of visual effects, like it did on Rogue One, and after talks with Fisher’s family, it has been given permission to use existing footage from The Force Awakens, and The Last Jedi.

On Monday, Marvel dropped the first trailer for Thor’s third standalone outing. The Asgardian demi-god loses his hammer to the new villain Hela (Cate Blanchett), is thrown out of his own kingdom, and gets kidnapped by misfits that deliver him to the planet Sakaar, which is ruled by the Grandmaster (Jeff Goldblum). Oh, did we mention he meets the Hulk? Thor: Ragnarok opens November 3.

That very day, Netflix released a trailer for the second season of Sense8, the Wachowski’s latest project. It’ll follow the eight inter-connected individuals, and will be available in its entirety on the streaming service come May 5.

Guardians of the Galaxy Vol. 2, the next chapter in Marvel’s ever-expanding saga, is out May 5 worldwide. That much is known. And thanks to director James Gunn, we know the film’s soundtrack will be available a week before, on April 28. Good news for everyone who loved the music for the first film (that includes us).

On Wednesday, a teaser trailer for EA’s Star Wars Battlefront II leaked on the Internet. It showed a campaign mode that’s been rumoured, with the player being a solider for the Empire. The multiplayer action, meanwhile, will likely span all eras of Star Wars. It’s been pulled down since, and the official one will be up on Saturday.

Later that day, The Hollywood Reporter reported that Josh Brolin had been signed to play the role of Cable opposite Ryan Reynolds’ Deadpool in the upcoming sequel. David Leitch is directing Deadpool 2, which is scheduled for a 2018 release.

And on the same day, THR also broke the casting news for Fantastic Beasts 2 – Jude Law has been brought on board to play young Albus Dumbledore, opposite [spoiler alert] Johnny Depp as Gellert Grindelwald, who spent the film disguised as Colin Farrell. The sequel will be set in Paris and parts of England. The film arrives November 16, 2018.

TV:
Mystery Science Theater 3000: The Return
After a crowdfunding campaign on Kickstarter that generated over $6 million, the revival of the cult hit show has finally arrived on Netflix. Sadly, not for everyone. It will only be available in the US, Canada, UK, Ireland, Australia, and New Zealand. Hopefully, Netflix will figure out deals with local TV networks soon enough.

The show does retain many of its favourite elements – you’ve got the human subject (Jonah Ray) stuck in the Satellite of Love, forced to watch a series of B-movies chosen by two mad scientists – Felicia Day, and Patton Oswalt – on the ground below. Except this time, their base is on the Moon, yep.

To keep Ray company, and help riff on the films’ terribleness, he’s got three robot companions – Tom Servo, Crow T. Robot, and Gypsy. The terrible movie for the first episode is Reptilicus (1961). There will still be ‘commercial breaks’ despite being on Netflix, and there will even be cameos from the likes of Jerry Seinfeld, Joel McHale, Neil Patrick Harris, and more.

How to access: Netflix
Time commitment: 14 episodes of varying length

Better Call Saul
With this Breaking Bad spin-off, co-creators Vince Gillian and Peter Gould picked up the critical acclaim where they left off with the parent’s final season. The show’s second season [spoiler alert] ended with a dual cliff-hanger. On one side, Chuck (Michael McKean) staged a scene to get Jimmy (Bob Odenkirk) to confess to a felony.

On the other, Mike (Jonathan Banks) is after the cartel boss Hector Salamanca (Mark Margolis), who’s not yet in the wheelchair Bad fans remember him for. But after an invisible intervention, he’s forced to find the person who seems to know a lot about his work, with the start of the third season.

Jimmy, meanwhile, is slowly devolving into the character we better know him by: Saul Goodman. As Chuck launches an inquest, Jimmy, and Kim’s law practice – and their romance – are set to be severely tested. Along the way, we’ll learn more about their backstories with nods to the Breaking Bad universe. 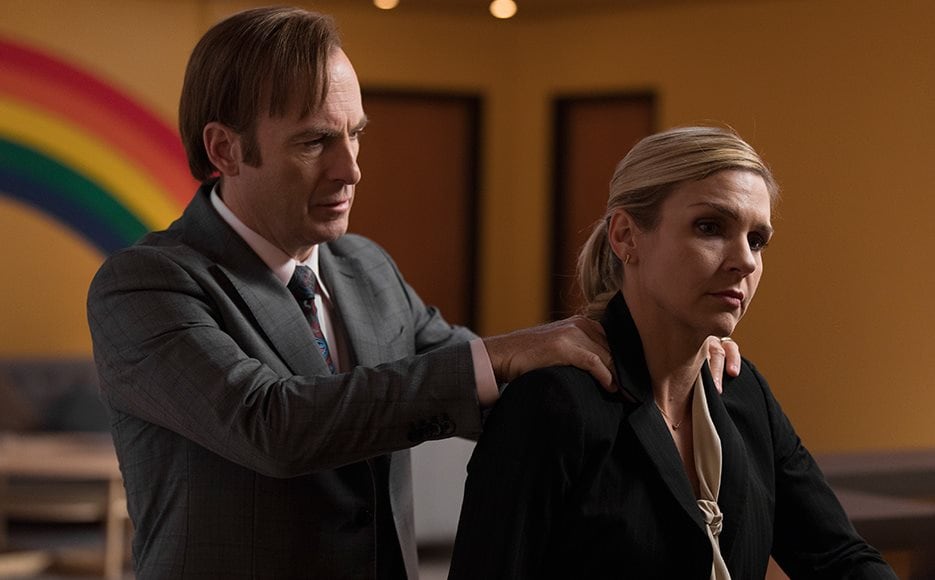 The Leftovers
After a mediocre first season, creator Damon Lindelof gave the show a soft reboot with the second season’s premiere. The show imagines a future where 2 per cent of the world’s population – about 140 million people – vanished overnight. Except one small town was spared in eastern Texas, with a population of over 9,000 people.

The Leftovers is focused on two families: the Garveys, and the Murphys, and what they witness after the Departure that shook the world. The third and final season, beginning this Sunday in the US, will wrap up their storylines. Lindelof was an Emmy winner on Lost, which has become infamous for its terrible ending, but he seems to have cooked up a genuine winner here, according to early reviews.

The new episodes concoct “a wild narrative with ambitious new threads”, according to Indiewire’s Ben Travers, that hones in on the characters’ “fundamental spiritual and psychological beliefs”. It looks set to be an emotionally devastating ending, so buckle up.

Veep
After a five-season arc that has taken her from senator, to Vice President, and ultimately the US President, Selina Meyer (Julia Louis-Dreyfus) finds herself in the most uncomfortable of situations. She’s been kicked out of the White House, thanks to a recount – and other tragedies – that didn’t go in her favour.

Her trusted entourage (okay, that’s a lie) has dispersed following the calamity, with only Gary (Tony Hale) remaining by her side. Mike (Matt Walsh) soon joins in too, what with having to deal with three kids back home. Selina, meanwhile, grapples with being outside the spotlight, and doing her best to stay in it, where she loves herself.

The sixth season won’t focus much on real-life politics, because Veep was shot in June, when America’s future was still up for grabs. Instead, it’s created an alternate reality for itself, Louis-Dreyfus said in an interview. Early reviews say it’s as good as always, with every cast member performing to their maximum capabilities.

Movies:
Fast and Furious 8
On the back of the franchise’s first billion-dollar entry, F. Gary Gray (The Italian Job, Straight Outta Compton) takes over the Fast and Furious series for the eighth instalment, which will be the first since Tokyo Drift without Paul Walker, after the actor’s death in a car accident midway through filming of Furious 7. The rest of the ensemble returns as expected, with new additions in Scott Eastwood, Charlize Theron, and a cameo from Helen Mirren.

The Fate of the Furious – Universal’s rebranding of Fast and Furious 8 – picks up where the last one left off, with Dom (Vin Diesel) and Letty (Michelle Rodriguez) honeymooning in Cuba. After a mysterious hacker named Cipher (Theron) shows up with blackmail material, Dom helps her steal some heavy-duty weapons. Now, the gang is forced to go up against one of their own.

It’s not a great movie, overall, but loyalists probably won’t care. For the rest, we’ve got a detailed review that delves into what the film does wrong, so you should read that before you fork over the money for tickets.

How to access: Out in cinema halls
Time commitment: 2 hours and 16 minutes

Hidden Figures
Taraji P. Henson, Octavia Spencer, and Janelle Monáe star in this true story about African-American women who worked as “computers” – that is performed mathematical calculations – for the engineers at NASA, and helped them in the 60s Space Race against the then-USSR. Henson plays Katherine G. Johnson – a Presidential Medal of Freedom awardee – who calculated flight trajectories for Project Mercury, the US’ first programme to put a man in space.

The film, directed by Theodore Melfi, is based on Margot Lee Shetterly’s non-fiction book of the same name, which hit the top position on The New York Times’ non-fiction best sellers list. Its cinematic adaptation has received tons of praise too – it was nominated for three Oscars, including Best Picture.

How to access: Amazon US, Amazon Video US, Google Play Movies, iTunes US, Microsoft Store, or YouTube
Time commitment: 2 hours and 7 minutes

Toni Erdmann
Directed by Maren Ade, Toni Edrmann is follow-up to her 2010 film Everyone Else, which premiered at Cannes last year, and was an Oscar nominee in the foreign language category. It’s about a father-daughter relationship between Winfried (Peter Simonischek) and his forever-busy daughter Ines (Sandra Hüller).

After Winfried’s old dog dies, he decides to surprise her at her place of work in Bucharest. But it doesn’t go too well. While Ines is trying to make a mark, Winfried likes to play practical jokes, and deliver jabs at her lifestyle. Eventually, he agrees to return home to Germany. But a day later, Winfried is back as Toni Erdmann, disguised in a weird wig and fake teeth.

He claims to the life coach for Ines’ CEO, and barges into her professional life. It’s a comedy film, so it’s all about the madness that ensues from there on.

How to access: Amazon US, Amazon Video US, iTunes US, or Microsoft Store
Time commitment: 2 hours and 42 minutes

Lion
Based on the non-fiction book A Long Way Home by Saroo Brierley with Larry Buttrose, and written for the screen by Luke Davies, Lion tells the story of a five-year-old Indian boy who gets lost on a train, and ends up somewhere far away – Kolkata. Saroo is eventually adopted by an Australian couple, and returns to India 25 years late to find his lost family, and home.

The film is divided into two tonally-opposite halves – the first looks at the young boy, and the terror he faces after separating from his family. The second, as an adult – played by Dev Patel – focuses on his resilience, determination, and courage to find what he lost, with the help of a technology called Google Earth.

Garth Davis makes his directorial debut with the film, and even though Lion borrows from genre clichés, and feels like Oscar bait, it’s still a moving story. Lion had six nominations at the Oscars, and won two BAFTAs – Supporting Actor (Patel), and Screenplay.

How to access: Amazon US, Amazon Video US, iTunes US, or Microsoft Store
Time commitment: 2 hours

Video games:
Bayonetta
First developed for the PS3 and Xbox 360 in 2009, Sega’s Bayonetta was a third-person action title from the brains of Hideki Kamiya. Set in the fictional European city of Vigrid, it thrust you in the role of a gun-wielding witch that had the power to shapeshift, use magical attacks and various firearms, and summon demons with her hair. What is going on here?

The game had a combat system similar to Kamiya’s earlier title – Devil May Cry – with the option of both melee and long-ranged attacks, and complex combo strings, so that players could craft finishing moves with as much flair as possible. Bayonetta even had “Witch Time”, which temporarily slowed time if players dodged at the right time.

Although the game was a critical hit and sold over 1.35 million units, developer PlatinumGames was disappointed with the sales. After an eight-year delay, it has now brought the game to PCs, though it’s still best enjoyed with a controller, Sega says. Thanks to that delay though, you can enjoy Bayonetta in 4K, with all the bells and whistles.

How to access: Steam for Windows PCs
Time commitment: 12 hours