Marvel's The Defenders on Netflix: Release Date, Episodes, Characters, and All You Need to Know 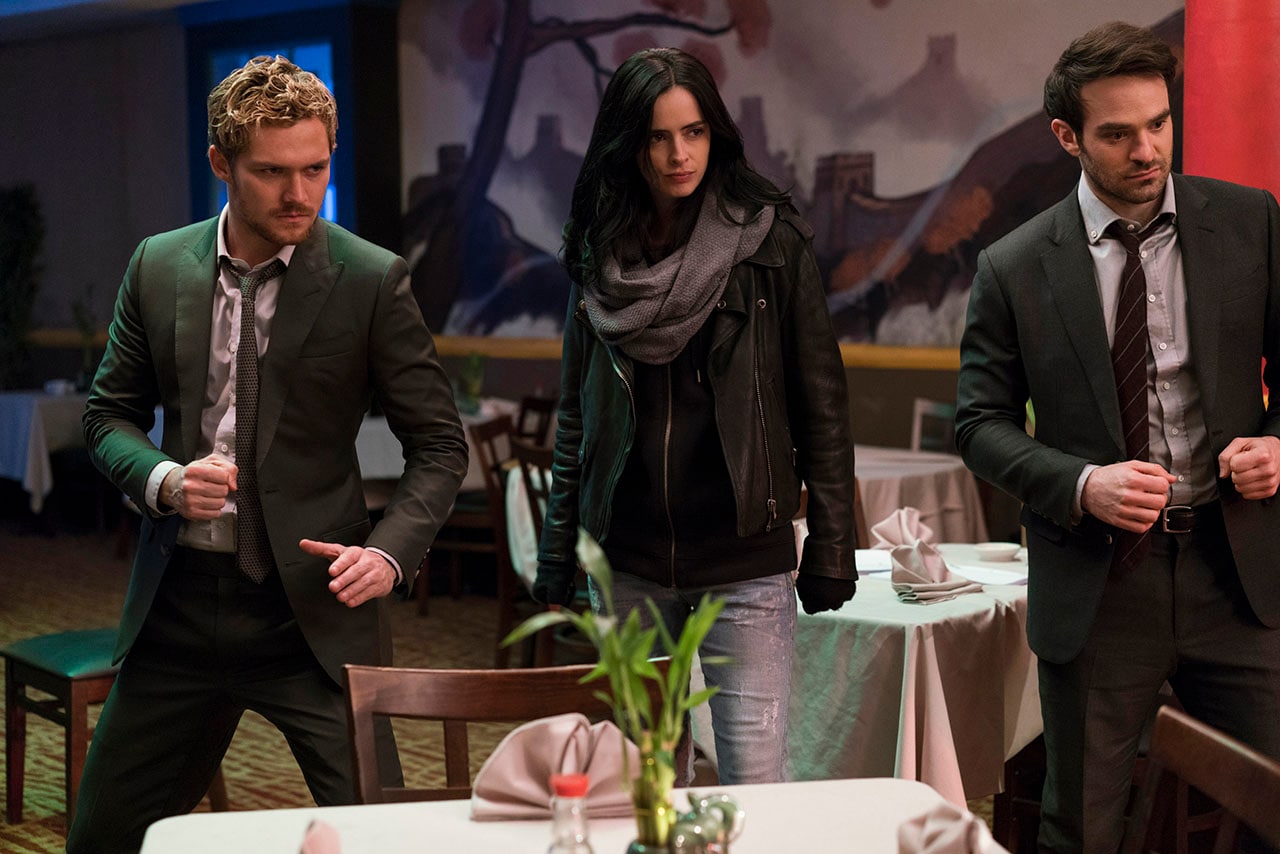 (L-R) Iron Fist, Jessica Jones, and Daredevil in a still from Marvel's The Defenders

After three years, five seasons and 65 episodes on Netflix, Marvel's The Defenders – the crossover mini-series featuring Daredevil, Jessica Jones, Luke Cage, and Iron Fist – is finally here. The quartet of New York's street-level heroes will be forced to join up to save their city from an evil force together.

Before you start your weekend Defenders binge-watch, you probably have some questions. When exactly is it out? What's the best way to see it? Whom can I expect to see? Will the annoying Iron Fist show up? And what if I haven't seen a single Marvel episode on Netflix? We're going to answer all those questions below, and if you've any more, leave them in the comments section.

When does Marvel's The Defenders release?
The Defenders will be available worldwide at midnight Pacific Time on Friday, August 18. That's Friday at 12:30pm IST if you're in India. You'll need a Netflix subscription to watch it, which starts at Rs. 500 per month for standard definition and a single screen.

What is the best quality option for The Defenders?
Since The Defenders is a Netflix Original, it has been shot and produced in 4K UHD HDR. That means it's available in ultra-high definition video quality (2160p) and it's got support for high-dynamic-range (HDR) video, which gives you a wider gamut of colours and better contrast ratio, allowing for brighter whites and deeper blacks.

If you've got a 4K HDR display that's Netflix compatible, and you're on the most expensive (Rs. 800 per month) plan, it's the best way to watch The Defenders. In terms of audio - there's no support for Dolby Atmos though, which is a bit unfortunate, but not very surprising.

How many episodes are there? What's the total runtime?
Unlike solo Marvel-Netflix series that run for 13 episodes, The Defenders has only eight episodes. That makes for eight hours of running time. The reason there are fewer episodes isn't because of the story though; it was needed from a production standpoint, because Marvel and Netflix had to pause production on all individual shows to bring everyone together for The Defenders.

Note: spoilers below for all previous Marvel-Netflix shows.

Who are the main characters?
All four heroes who've had their own series prior to this are returning for The Defenders. That includes Charlie Cox as Matt Murdock aka Daredevil, Krysten Ritter as Jessica Jones, Mike Colter as Luke Cage, and Finn Jones as Danny Rand aka Iron Fist.

Alexandra is one of the main people at The Hand, the evil organisation that has its hands (excuse the pun) in numerous industries. You've heard about them, if you watched either Daredevil season 2, or Iron Fist.

“She’s a very confident, smart and persuasive leader. When people say that I’m the villain, well, I think that that is just one way to look at the character," Weaver said about her character. "To me, Alexandra has a lot of wisdom because she’s been doing what she does for a long time and she has a lot of empathy. She’s a very complex character and I felt delighted to be a part of that."

S.J. Clarkson and Sigourney Weaver on the sets of Marvel's The Defenders
Photo Credit: Jessica Miglio/Netflix

What other Marvel characters can I expect to show up?
Claire Temple (Rosario Dawson), the nurse who has appeared in all four Marvel-Netflix shows prior to this, will obviously play a part. From the trailers, you know that she will set up a meeting between Luke Cage and Iron Fist. Add to that walking stick-toting villain Madame Gao (Wai Ching Ho), reprising her role from Daredevil and Iron Fist.

Here's the full list of other supporting characters that will be in The Defenders:

When is The Defenders set? Can you elaborate on the timeline?
The Defenders is set six months after the events of Daredevil season 2 and Iron Fist. When the crossover begins, we are told that Danny and Colleen have been chasing members of The Hand for five months, after coming across the massacre at K’un-Lun.

At a press event in New York earlier this month, Cox said that he's hoping that Daredevil season 3 can explore some of that jump. "I was a little bit disappointed that we didn’t get to explore what transpired the end of season 2," Cox added. "Maybe we’ll go back and look at that in season 3, I don't know."

If you don't remember, Elektra dies at the end of Daredevil season 2. Owing to that, Matt has given up being a superhero. He is trying to rebuild his life – including his relationship with Karen – but then gets roped into being the vigilante again.

How about the other three superheroes?
"When she kills him, that’s big news in New York City and so her phone’s ringing off the hook," Ritter said, about Jessica's life after she choked the villain Kilgrave to death. "However, she’s become more reclusive and she’s not answering her phone or taking on any cases. Kilgrave was her reason for getting up in the morning for a long time and now that she doesn’t have that, she’s trying to figure things out and is flailing a little bit."

Luke, meanwhile, has been in prison. Thanks to help provided by Claire, he's out after a short stint when Defenders begins. "As a free man, he has to think about rebuilding, figuring out what his next step is, what he’s going to do for a living and ultimately what he’s going to do with his life," Colter said.

For Danny, it's about coming of age. He wants to take sole responsibility for the deaths in K'un-Lun, and fight The Hand by himself. But when he realises that there are other people with abilities in New York, who have been doing superhero work longer than him, he starts learning from them.

What are the reviews like?
Members of the press – us included – have seen the first half of The Defenders, which amounts to four episodes in total. As we noted in our review, the mini-series is a slow-burn, and gets exciting by the end of episode 3. That's because it takes some time to bring the four heroes together, and as a result of the first two episodes feel like four shows running in parallel.

Co-showrunner Marco Ramirez has said that "getting them to cross paths organically and not in the superhero world felt like the right thing for our show to do", but we feel that The Defenders would be a better show if it had a better start. For what it's worth, the excitement does increase by episode 4, and we're hoping it gets better from there.

Colleen Wing, and Claire Temple in a still from Marvel's The Defenders
Photo Credit: Sarah Shatz/Netflix

What if I haven't seen a single episode before?
The early moments of The Defenders are heavily rooted in the ends of the latest seasons. That means you'll be quite confused as to what's going on, be it character motivations, and their interactions. For what it's worth, the slow organic approach does help with reintroducing the four heroes, and there are enough nods to their backstories if you're willing to work through it.

The slow build-up allows newcomers to pick up on the new threat, and realise what the past conflicts were. Plus, Weaver's Alexandra has never appeared before, so you should have no trouble understanding her scenes.

Is there any connection to the comic books?
Not exactly. Although The Defenders moniker originated in the comics, this particular team-up – Daredevil, Jessica Jones, Luke Cage, and Iron Fist – has never happened during its run. But the show does borrow from their solo comic series, according to Ramirez.

"I think that some of the fun has been seeing where a storyline can intersect with the comics and give fans, like myself, some really fun moments," he said. "We’re doing our own things, but definitely nodding to cool comic moments."

Marvel's The Defenders will be available August 18 on Netflix.