The live-action Cowboy Bebop is out Friday on Netflix worldwide. 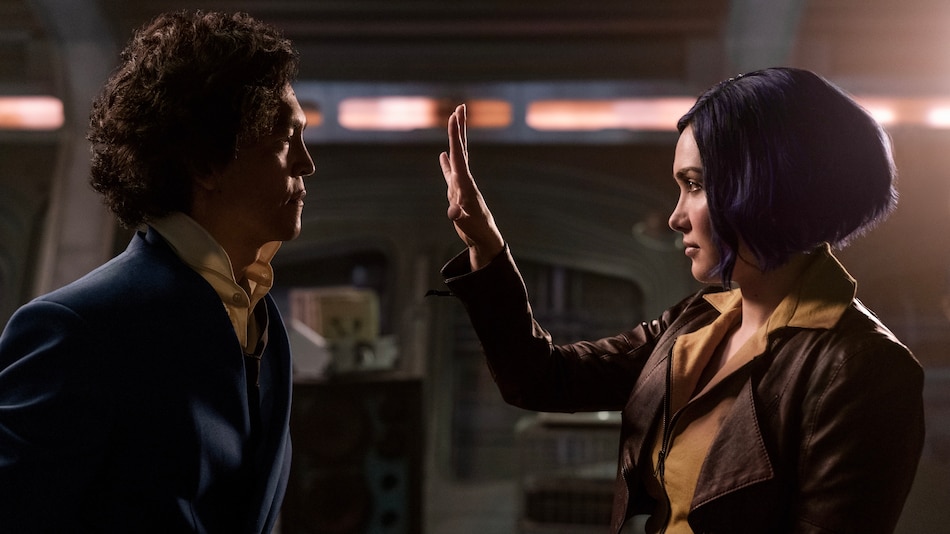 Cowboy Bebop, the upcoming science fiction television series, is all set to release on Netflix this week. It is a live-action remake of a 1998 Japanese science fiction neo-noir anime television series which was created and animated by Sunrise Studio. The 2021 American remake is set in the year 2071 and focuses on the adventures of a ragtag group of bounty hunters (Star Trek's John Cho among them) who are chasing down criminals across the Solar System on the Bebop spaceship. Developed by Christopher Yost (Thor: Ragnarok) and with André Nemec (Zoo, Mission: Impossible – Ghost Protocol) as showrunner, Cowboy Bebop also stars Mustafa Shakir and Daniella Pineda among others. Cowboy Bebop season 1 consists of 10 hour-long episodes

The series features over 140 different sets and locations and is full of little easter eggs and nods to the original anime's creative team. The show opens in Watanabe Casino, a nod to original series director Shinichirō Watanabe.

The filming of the series took place in Auckland, New Zealand. Nemec took an early scouting trip to Auckland, New Zealand in 2019, and the shooting location “just felt right.” The location would prove extremely beneficial when filming continued during the COVID-19 pandemic in 2020. “Before this show, I'd never shot in New Zealand before. The level of artistry and craftsmanship among the people who work in the industry here is outstanding,” Nemec said.

Netflix has also partnered with Titan Books to publish several books based on the series, starting back in August. The first book, entitled Cowboy Bebop: A Syndicate Story: Red Planet Requiem was released this month. An art book is also set to be released in January 2022, which will have concept art, behind-the-scenes photography, and more from the series.

Here is everything you need to know about Cowboy Bebop.

Cowboy Bebop is set to be released on Friday, November 19 on Netflix in India and around the world. The series consists of 10 hour-long episodes which will be released all at once on release date.

John Cho (Harold in the Harold & Kumar series) stars as Spike Spiegel, ​​a bounty hunter born on Mars with a history of violent gang activity. Talking about his role in Cowboy Bebop, Cho said, “It's been a dream job in the sense that the show is a mashup of so many genres...This feels like a career's worth of roles all in one character.”

Daniella Pineda (Jurassic World: Fallen Kingdom) is Faye Valentine — a bounty hunter and con artist in debt from excessive gambling fees. Valentine is actually around 77 years old, although she appears to be around 23 years old. This is because she was put into a cryogenic freeze after a space shuttle accident, thus she spent 54 years in suspended animation.

Elena Satine (Revenge) plays Julia, a femme fatale who has a complicated past with Spike and Vicious, and Alex Hassell (Suburbicon) plays Vicious — Spike's nemesis — a power-hungry Capo gangster from the crime organisation Syndicate who was Spike's partner before their falling out.

The American remake of Cowboy Bebop was developed by Yost. Yost and Nemec are executive producers alongside Marty Adelstein, Jeff Pinkner, Josh Appelbaum, Scott Rosenberg, Becky Clements, Christopher Yost, Yasuo Miyakawa, Masayuki Ozaki, Shin Sasaki, Tim Coddington, Tetsu Fujimura, Michael Katleman, and Matthew Weinberg. From the beginning, the creative goal for the live-action adaptation was to stay true to the anime's spirit. Talking about the show to The Hollywood Reporter, Clements said, “Because it's beloved, we did not want to screw it up...We were terrified because the fan base was so loyal. We always had an eye toward making sure we kept the integrity of the original in the live-action.”

From Eternals to Cowboy Bebop, What to Watch in November

The action-adventure, sci-fi series is being brought out by Tomorrow Studios, Midnight Radio, and Sunrise and is being distributed by Netflix. Alex Garcia Lopez and Michael Katleman each directed five episodes of the series, as I said before.

A behind the scenes video of Cowboy Bebop, from the point-of-view of Ein — a Pembroke Welsh Corgi brought aboard the Bebop by Spike – was released by Netflix in October 2019.

Netflix launched an official teaser titled ‘Lost Session' last month. The official trailer (below) was launched by Netflix towards the end of October.

Cowboy Bebop is an action-packed space Western about three bounty hunters, aka “cowboys,” all trying to outrun the past. As different as they are deadly, Spike Spiegel, Jet Black, and Faye Valentine form a scrappy, snarky crew ready to hunt down the solar system's most dangerous criminals — for the right price. But they can only kick and quip their way out of so many scuffles before their pasts finally catch up with them.

The show has garnered mostly negative reviews from critics. According to reviews aggregator Rotten Tomatoes, the series currently has a 38 percent score on its Tomatometer. On fellow reviews aggregator Metacritic, Cowboy Bebop has a Metascore of 39 based on 17 critic reviews, indicating ‘generally unfavourable reviews'.

We had a more favourable view of the series. You can read our in-depth review of Cowboy Bebop at the link.

Speaking to The Hollywood Reporter about the future of Cowboy Bebop, showrunner Nemec told that he has “big plans” for the future of the series.

“We definitely know where we want to go, and I'm excited that we get to tell those stories. Fingers crossed that we get more Cowboy Bebop,” Nemec said.

Netflix is yet to officially announce a season two for the show though.

Here is the official poster of the sci-fi action-adventure series Cowboy Bebop from Netflix: