Post-credits scenes have long been a staple of Marvel films, and Captain Marvel — the first ever film for the studio with a female superhero in the lead — which released Friday in cinemas worldwide, is no different. It has two scenes during the credits, in fact: one between the credits and one at the very end. The mid-credits scene is the more important one, since it sets up the highly-awaited Avengers: Endgame, while the end-credits scene is more of a gag, really. Either way, if you haven't seen Captain Marvel yet, you better stop reading now. Unless you don't mind the film being spoiled for you, then please continue.

Captain Marvel Is No Match for Wonder Woman, and That's a Shame

Warning: spoilers ahead for Captain Marvel and Avengers: Infinity War.

Captain Marvel ends with Carol Danvers (Brie Larson) leaving with the remaining shape-shifting Skrulls, led by Talos (Ben Mendelsohn), to find them a new home on the other side of the galaxy, which would keep them safe from the menace of the Kree. Before she does, Danvers hands Nick Fury (Samuel L. Jackson) his pager back in an upgraded form, which she says will work across “a galaxy or two”. But it's to be only used for emergencies, she adds. That's the same pager we see in the only post-credits scene in Avengers: Infinity War, where Captain Marvel's introduction was first teased.

In the first of the two scenes during the Captain Marvel credits, we see the remaining Avengers — Steve Rogers aka Captain America (Chris Evans), Natasha Romanoff aka Black Widow (Scarlett Johansson), Bruce Banner aka the Hulk (Mark Ruffalo), and Rhodey aka War Machine (Don Cheadle) — trying to figure out how to put things back in order. Part of that involves Fury's pager, which they have somehow obtained. Last we saw them, they were in Wakanda while Fury was likely in New York.

Moreover, they have configured the pager in such a way that the internal battery has been bypassed, allowing it to send the distress signal uninterrupted. They don't know who the pager is trying to reach, but they clearly do know that it's important. But despite their efforts, the pager shuts off, leaving everyone confused as to how that's possible. Just as Black Widow asks Banner to get it back online, the camera pans to reveal Danvers standing behind them, who asks: “Where's Fury?”

Though the audience knows everything, all the Avengers have no idea who she is and how she knows Fury. The scene immediately cuts to black afterwards, leaving those threads hanging for seven weeks until April 26, 2019, when Avengers: Endgame rolls into cinemas worldwide. The Captain Marvel mid-credits scene is most likely lifted from Endgame itself, somewhere around the middle of the film, if we had to guess. 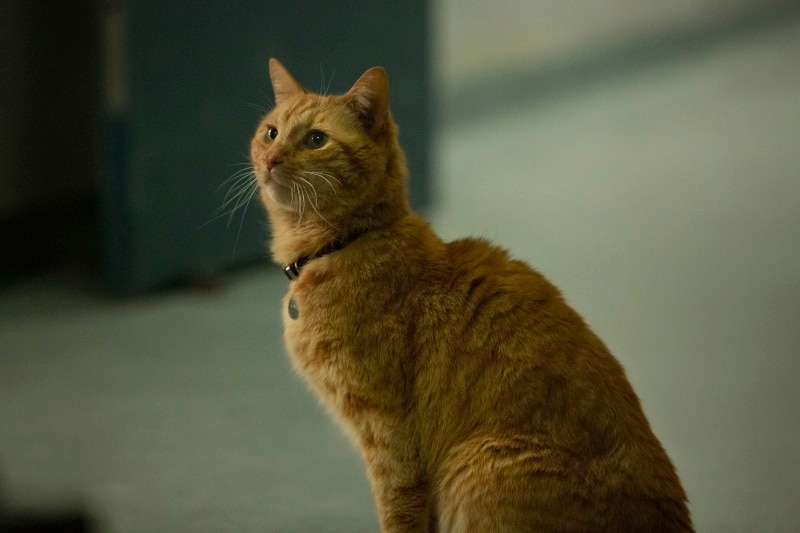 The second scene during the Captain Marvel credits stars only one character: Goose, the cat that steals every scene during the movie, which is actually an alien belonging to the species ‘Flerken' that resemble cats in appearance. Goose is seen sitting on Fury's desk from Captain Marvel, except the objects around Goose represent a different era and not the mid-90s, suggesting some time has passed.

Goose repeatedly tries to cough up a hairball to no avail and ultimately, she spits out the Tesseract, that cosmic cube that contains one of the six Infinity Stones, which it had “eaten” towards the end of Captain Marvel to keep it safe from the Kree. The scene doesn't have any consequence on its own, which is why it's more of a joke, but it does tell us more about the Tesseract's timeline.

Audiences first saw it in the post-credits scene in Thor back in 2011, before it played a major role in Captain America: The First Avenger later that year, and The Avengers in 2012. We already knew the Tesseract had been with Howard Stark, Tony Stark's father, for a while after World War II and that it finally ended up with S.H.I.E.L.D. later, and now we have some of the missing pieces in between.

Danvers' mentor, Mar-Vell aka Dr. Wendy Lawson (Annette Bening), has the Tesseract in her possession during the 1980s, Captain Marvel tells us, and it eventually ends up in Goose's stomach for a few years during the 1990s and possibly, early 2000s. What we still don't know, though, is how the Infinity Stone-carrier went from Howard Stark to Mar-Vell.

But what ultimately matters, for now, is that all six Infinity Stones are currently with Thanos. And the depleted Avengers could sure use Captain Marvel's help to get them back.