Can Netflix Use Technology to Reinvent TV and Movie Production?

Despite having practically created the streaming industry, Netflix finds itself today in a defensive position as one-time content partners like Disney make moves to set up their own streaming services. That's perhaps one reason why Netflix has been keen to stress that it is both a content company - it announced plans to spend $8 billion on content in 2018 - and a technology company. Speaking on the sidelines of a press event at the company’s office in Los Angeles last week, a Netflix representative pointed out, "we don't just use technology to get the shows to you, our tech side is also being used to make shows in a better way."

Later, Gadgets 360 got to speak with Chris Goss, Director Studio Technology at Netflix, and Amie Tornincasa, Production Technology Manager Netflix. Goss has a studio background, having worked at Paramount, ABC, and Universal, while Tornincasa comes from an engineering background. Together, their teams are working on ways to improve the production process with the use of technology, and the result is Netflix's newest app - one that's not meant for the viewers, but rather for the filmmakers. Called Move, it's a progressive web app (PWA), which is a kind of app that runs in the browser, and it's used to manage all planning for a production.

"Traditionally, technology adoption has been very slow - we went from film to digital, from practical effects to CGI, from broadcast to streaming, but the production side is still all about lots and lots of paper,” said Goss.

Tornincasa, who is based in Netflix's Silicon Valley office in Los Gatos, came to Hollywood and spent time working with a production crew to figure out how technology could make a difference.

"The tech was still fax machines and copiers, it was an archaic workflow," said Tornincasa. "And when we looked at the current marketplace and landscape for software applications in this industry, it's very limited. There are some startups that have attempted to pioneer and take over the space and provide solutions, but they tend to be more of an all-in model where they compartmentalise and they kind of keep their data, and you need to use all of their services. We [Netflix] are a growing, global studio, and we can' fit ourselves into a defined box."

To get around this, Netflix started work on Prodicle, a group of apps that can be used for production work. Of these, the first one to be deployed is Move, which can send notifications to crew members, let them access scene info, read the sides and update call sheets, and generate automatic status reports. It's built as a responsive PWA so it can be used on any device, and supports SMS and email notifications well, so that everyone in a production can stay up to date.

Netflix only started using Move recently - on the production of two still unreleased series, Glow Season 2 and A Series of Unfortunate Events Season 3. The process has been a work in progress with features being added as the productions moved forward. 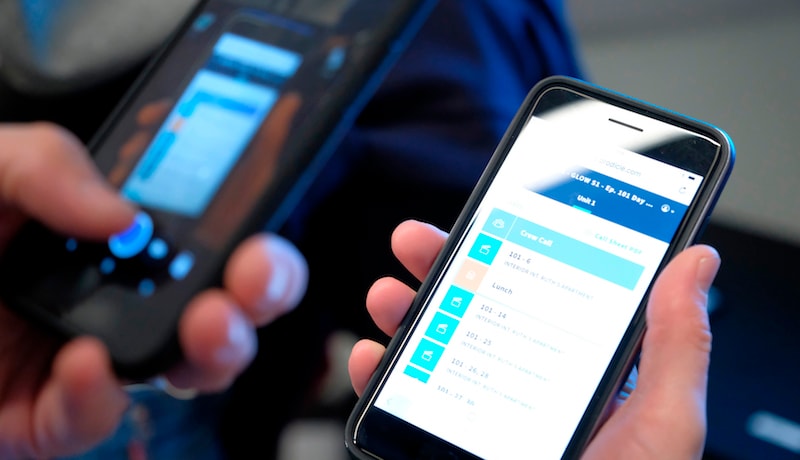 Each unit can see its production schedule and other details like locations or shooting notes are available by tapping on the entries.

The obvious line of thinking is that this kind of change - which is quite dramatic for any production - would lead to improvements in efficiency, savings in time and money, and be a lucrative change. However, Goss quickly quelled the notion, and said: "We don't want to spend too much time thinking about that because we think that's somewhat of a setup for failure, especially seeing the past failures and why there hasn't been a lot of innovation in this space."

"Instead, we really talk a lot about crew empowerment," he continued. "It's the concept of giving someone technology that reduces the administrative friction, to do their jobs and allows them to be more creative. It's not about digitising paper, it's about creating a new workflow, a new way of doing something, that comes from collaboration, communication, and data."

The goal with Prodicle in general, and with Move specifically, is to change workflows by making it easier to collaborate and share information though notifications and other channels, but the data aspect of it is what holds promise for future productions. "They've [filmmakers] got to make the decisions quickly," said Goss. "If we can use historical data to help them make those decisions quickly, they're going to produce a better piece of content for us, and so our goals with data is really to enable those productions to operate with that level of intelligence."

"So when you build a production schedule, it's all based on tribal knowledge, right?" he explained further. "It's… a producer comes, and they say oh, you know, I think on my last show that had a car explosion, it took three days and then we did two days of prep, and it was X-amount of dollars. That historical knowledge is in their brain. If we're able to capture that knowledge using tools, then you could very quickly use that information."

Building this up in a significant manner would require it to be used by other studios as well, and Goss says that Netflix wants that to happen. It's started with some originals, and although it's not mandated for Netflix shows, Goss hoped that more and more will use Move. "It's a big question mark for us right now," he added. "We're still in our infancy. We want to first make it a really solid product across the board, and then have those conversations about what does it look like to release wide, and what would that strategy be."

At the same time, the team is also working on a larger Prodicle umbrella, and aside from scheduling, it's looking at things like scripting, and budgeting as well, as some of the big questions to answer.

"One of the things we are working on is breaking down a script for shoots," added Goss, "how we use the script information to plan our roadmap; the schedule which is how long it is going to take to shoot and what are we doing each day, budget, how much is is going to cost, and crew administration. Move fits in that scheduling piece, but we're building tools around each of those areas."

Disclosure: Netflix sponsored the correspondent's travel and stay for the event in Los Angeles.

Further reading: Netflix, Film Production, A Series of Unfortunate Events, Netflix Prodicle, Prodicle Move, Prodicle
Gopal Sathe Email Gopal Gopal Sathe is the Editor of Gadgets 360. He has covered technology for 15 years. He has written about data use and privacy, and its use in politics. He has also written extensively about the latest devices, video games, and startups in India. Write to gopal@ndtv.com or get in touch on Twitter through his handle @gopalsathe with tips. More
Redmi 5 With 5.7-Inch Display, 3300mAh Battery Launched at Starting Price of Rs. 7,999
Stephen Hawking: A Brief History of Genius

Can Netflix Use Technology to Reinvent TV and Movie Production?
Comment