Apple Music vs Google Play Music vs Amazon Music vs Gaana and Others: Which Is the Best Music Streaming Service in India?

Streaming services are growing at an unprecedented rate across the world. The fact that music charts like USA's Billboard Top 100 and UK's Official Top 40 have started acknowledging a song's performance across streaming services show how important a medium streaming has become for music consumption. Indian are also fast catching onto this craze. A report by Deloitte claims that music streaming services in India will garner close to 273 million subscribers by 2020.

Deciding which streaming service to use can be a time-consuming and painstaking process. Amazon Music, which has just entered India, faces tough competition from the established players like Google Play Music, Apple Music, Gaana, and Saavn (which is going to merge with Jio Music from Reliance Jio), among others. To make your life easier, we have compared the top music streaming services available in India as of date.

Apple Music
Arguably the most well-rounded streaming service of the bunch, Apple Music has a slick - if, at times, slightly cumbersome - user interface, simply unmatched suggestions, and an exhaustive library. With 45 million songs, Apple Music has the most extensive music collection of the bunch spanning multiple languages, genres, and sensibilities. From the most mainstream to the most niche songs that we searched - Apple Music had them all.

Out of all the music streaming services we tested, Apple Music's album and playlist suggestions were the most accurate, with very few awkward recommendations. Apple Music's Browse section is also the most comprehensive - with niche sections like Indian Independent, Indian Classical, Jazz, and Alternative - which most others lack. This, along with the strong recommendation algorithm makes it very easy to discover new music.

With artists spotlight playlists, radio stations broadcasting 24/7, behind the scenes photos and videos from artists via Apple Music Connect (which allows artists to come closer to their fans), recommendations tailored to every day of the week as well as location specific recommendations, it is simply the most feature rich music streaming platform in India right now. 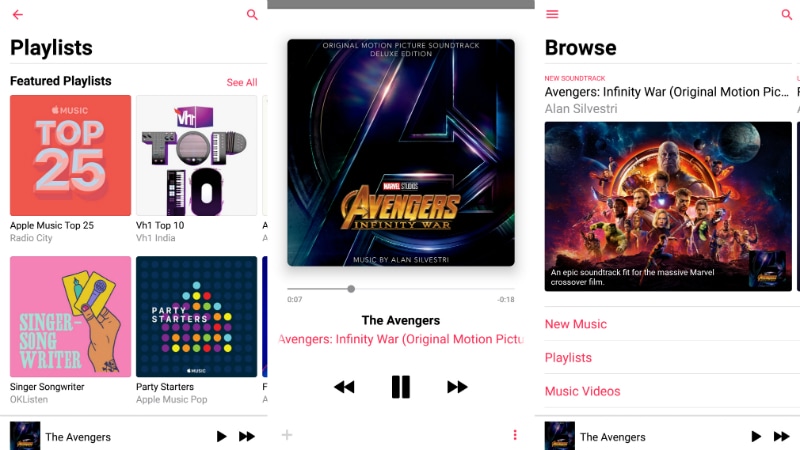 Apple Music is found on Android and iOS at the moment and can also be accessed via iTunes on Windows and Mac computers. It must be noted that the desktop version does not allow you to download songs for offline consumption. There is no Web interface either.

However, Apple Music has a few issues as well. The user interface is a bit too reminiscent of iTunes - and sometimes sacrifices usability for gloss. Additionally, the Android app - which has come a long way since its original release - still suffers from random playback issues.

While an individual subscription to Apple Music is a bargain compared to its US price, compared to other offerings in India, it's a bit expensive at Rs. 120 per month. However, the family plan - which grants full access to up to 6 people - is a superb deal at Rs. 190 per month, and Apple also offers students Music subscriptions at just Rs. 60 per month.

Google Play Music
Google Play Music lacks the slickness of Apple's offerings, but is an extremely usable application that delivers the basics. While not as robust as Apple's library (35 million songs as compare to 45 million), the catalogue - with both current as well as old Hindi, regional and English songs - is strong enough to leave most users satisfied.

However, fans of India's burgeoning independent music scene and niche genres will be left disappointed as Play Music's collection skews towards the mainstream, and there is no option as such to discover different genres of music. For example - the platform lacks certain albums by bands like Noori and Outlandish. There are some big name misses as well such as 'Fitoor' composed by Amit Trivedi.

Play Music has the most robust and well fleshed out download manager that allows you to easily keep track of all your downloaded files. Oddly enough, Play Music does not allow you to download one song at a time - you can only download an entire album/ playlist. 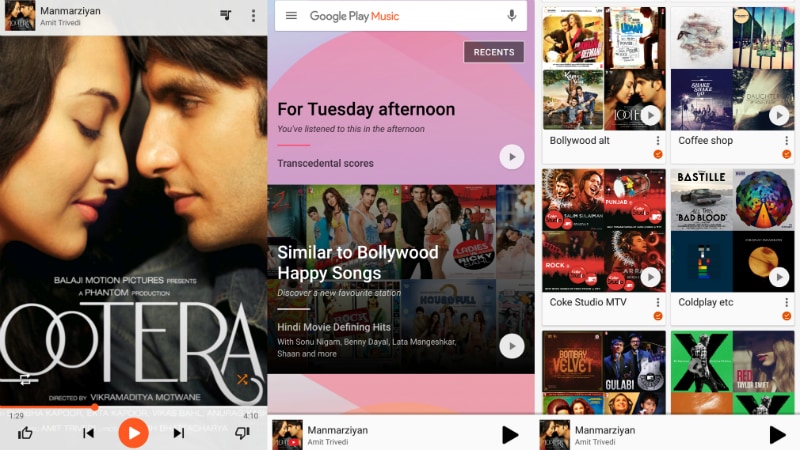 While not as insightful as Apple Music, Play Music's suggestions are accurate enough and can actually be quite specific at times. It suggests playlists based on the time of the day, your location, and even recommends some for specific activities like driving and working out.

How Play Music manages radio stations is its biggest USP. Unlike other streaming services which allow you to skip through radio stations just one song at a time, Play Music displays the next 24 songs as a list - which you can also save as a playlist if you wish. At Rs. 99 per month for single user, Google Play Music is a solid option overall.

The Google Play Music application can be found on the Android Play Store as well as the Apple App Store. There is a Web interface as well which allows you to access Play Music's entire repository of songs as well as your saved playlists from any computer.

Amazon Music
At Rs. 999 per year (Rs. 83 per month), Prime membership gives free one-day delivery on products bought from Amazon and also unlocks access to Amazon's music and video library - making it a solid all-in-one option for many.

Amazon Prime Music has a clean user interface that looks fresh and modern, Alexa built right into the app, and is the cheapest streaming service of the lot. Amazon India claims the platform is home to "tens of millions of songs". However, we found the catalog slightly limited and restrictive. For example, it lacks any songs from indie bands Jump Little Children and High Dive Heart, and only half the discography of popular bands like Penn Masala, and Strings is available on Amazon Music. At present, Prime Music should not be considered an alternative to a full-fledged music streaming service - it is simply too compromised in its current state. However, it is a nice add-on for existing Amazon Prime subscribers and can act as a nice supplement to your primary streaming service.

Gaana
One of the leading Indian music apps, Gaana has 30 million songs in its catalogue. It has a really strong pool of Indian music - both Hindi and regional - but falls short when it comes to its international collection. We could not find any songs from the likes of Jump Little Children, High Dive Heart, and Brian Mcfadden. Even the discography of a popular band like Coldplay was incomplete with albums like Live 2012 and Blue Room not being available. 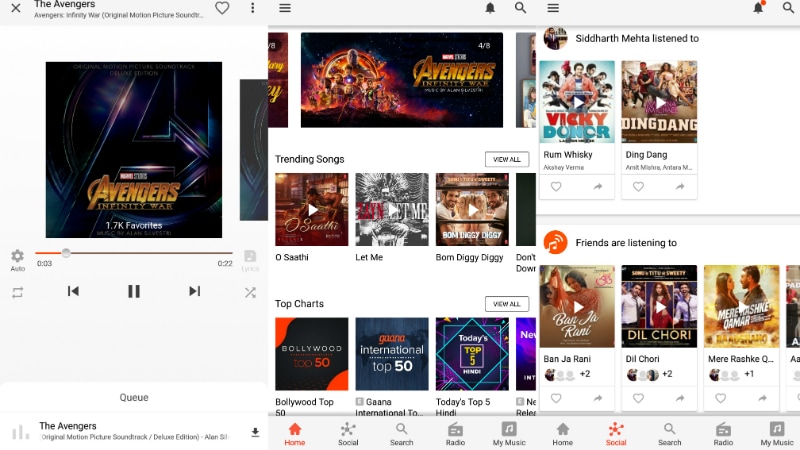 However, Gaana's social features are more robust compared to its competitors, with the ability to easily share songs with friends, view and save their playlists and take a peek at their listening habits in general.

Another plus point is that unlike Google Play Music and Apple Music - which do not offer any free tier beyond their trials - Gaana offers its entire catalogue for free, albeit with ads and without the ability to download songs offline. There is a premium package as well - which costs Rs 99 per month and gets rid of the pesky ads and unlocks offline downloads.

Get Gaana on Android | iOS | Web

Other music streaming services
Saavn is another major player in the space that recently announced a merger with Jio Music. With a confused and cluttered user interface and weak recommendations, it is quite easy to dismiss Saavn. However, Saavn has an ace up its sleeve - a great collection of original shows and podcasts - from the likes of Anupama Chopra, Rajeev Masand, Neha Dhupia, and Neelesh Mishra which help it stand out from the rest of the competition. Though Saavn claims it has 30 million songs in its kitty, we found its international collection a bit lacking. That said, Saavn has an extremely strong line-up of regional music as well as up and coming Indian indie artists like Prateek Kuhad and Arko.

Jio Music and Airtel's Wynk are also decent options but the former can only be used by Jio customers which severely limits its user base and the latter has a clunky and confused user interface and a very limited catalogue of around 2.6 million songs. Hungama Music is another veteran Indian music streaming service that hosts around 3.5 million songs on its platform. With rudimentary suggestions, a music library that skews towards the mainstream and an interface that needs a lot of work, it is difficult to recommend Hungama Music over the others.

SoundCloud is a music streaming service that caters to a niche audience. EPs from young and upcoming artists, mash-ups and demos from established players and remixes are found for free on SoundCloud. It is also home to podcasts from thousands of contact creators across the globe.

Verdict
Apple Music is the most well-rounded streaming service of the bunch - it has a solid and robust music library and its recommendations are the most accurate and astute. 24/7 radio stations and a slick user interface that allows for an easy way to discover new music add to its appeal.

Google Play Music, Gaana, and Saavn have their own sets of pros and cons and are good for specific sets of users. Play Music handles radio stations in the best manner, Saavn has a solid repository of original content tailored for Indian audiences, and Gaana has the best social features of the lot.

Amazon Music, Wynk, and Hungama Music are simply too compromised at the moment and have a long way to go to catch up to the rest. Jio users should definitely also try out Jio Music - as it is included alongside their Jio Prime membership.

Apple Music vs Google Play Music vs Amazon Music vs Gaana and Others: Which Is the Best Music Streaming Service in India?
Comment