American Gods Is Out Now on Amazon Video. Here’s What You Should Know.

For those who have read Neil Gaiman’s 2001 award-winning blend of fantasy and mythology, its new television adaptation is a godsend. The English author, known for his work on The Sandman, Stardust, and Coraline, is renowned for his ability to master a variety of genres. And in American Gods, the premise is as engrossing as the themes it tackles: on the brink of irrelevance, Old Gods must come together to put up a fight against the growing power of the New Gods, such as Technology, and Media.

This story is told to us through the viewpoint of Shadow Moon (Ricky Whittle), a mysterious ex-con who is released from prison a few days early, following his wife’s death in an accident. On the plane ride home, he meets a strange man by the name of Mr Wednesday (Ian McShane), who offers him a job. Although Shadow does his best to avoid the man, the two eventually embark on a road-trip across America.

“We shot for seven months, up in Toronto, all through the summer, which was very humid,” Whittle told Gadgets 360. “Especially when I'm wearing a very tight, leather heavy jacket. And Ian McShane was wearing a three-piece suit, and cashmere coat. We used to get quite warm driving around in that Cadillac, with no air-conditioning, and the windows up. So, very uncomfortable, but it was a lot of fun.” To prepare for the role, Whittle trained multiple hours a day, and ate 4,000 calories a day, gaining 16kg in the process.

Though the bulk of the writing work is in the capable hands of co-creators and showrunners Bryan Fuller (Hannibal) and Michael Green (Blade Runner 2049), Gaiman is an executive producer on the show, and contributes to narrative decisions if he has strong opinions. Whittle picked up the book when the audition process started, but the showrunners told him to stop.

“They said it was clouding my judgement,” he added. “And they wanted Shadow to be stronger than he is in the book. They said, they love Ricky, and they love Shadow. Now, if I could merge those two characters, that's the Shadow that they wanted for the TV adaption. In the books, Shadow goes along with everything. He's very blasé, he doesn't really react to anything at all. Whereas in the TV show, he's more vocal. He asks more questions. He gets freaked out a lot more by the fantastical things that happen around him.”

There’s a lot more to the new Starz series than Shadow, though. Here’s what you should know before you start watching.

1) American Gods is certainly not for everyone

The first episode of American Gods, out now on Amazon Prime Video, is both beautiful, and brutal. Blood gushes in any and every scene that demands it, and most of it gets portrayed gratuitously in slow-motion. Dozens of arrows pummel into a Viking warrior barely minutes into the first episode, and a ship captain brandishes a dagger from fire before blinding his soldiers in one eye as a sacrifice to the gods. American Gods isn’t meant for the squeamish, as you can tell.

While the violence itself is drawn from the source material, Fuller’s penchant for ratcheting up the visual splendour and extravagance – seen earlier on Hannibal – is on full display here. Starz must have found the right man, because book fans have loved the show’s tone, Whittle said.

“When we released the trailer at San Diego Comic-Con last year, fans thought the tone was perfect,” he said. “It's very hard, to please fans, for an adaption. But for some reason, it's literally been 98 percent positive. People have been saying, 'That's exactly how I imagine Shadow, it's almost like they are in my head.'; and 'Shadow just walked off the page, that's perfect casting.'"

“It's been like that for all the cast that's been announced, throughout the year with Ian McShane, with Emily [Browning], with Pablo Schreiber. Everyone's really loving everyone that's been cast. So, I feel the pressure that was there at the beginning of the show has subsided, and now all of a sudden, it's just that excitement to share this with the world.” 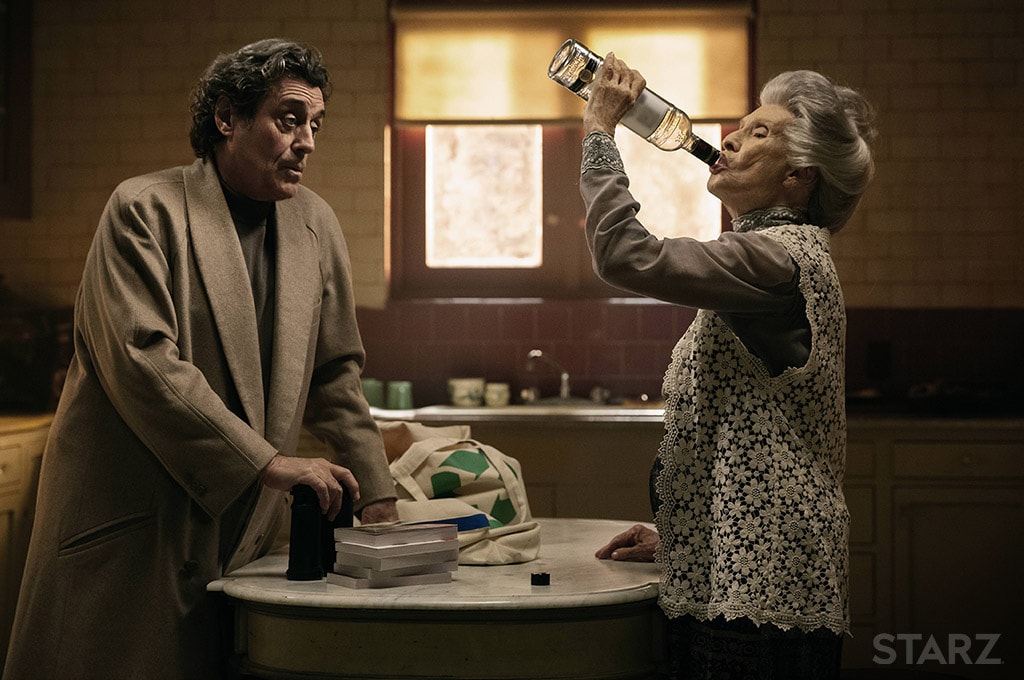 2) It's proudly a story about immigrants

In the book, Gaiman wrote that the people who came to America brought their Gods with them, but they have been forgotten over time. Now, the new things Americans are indulging in – the likes of television, and the Internet – are slowly replacing their fervour for the times gone by.

Since the Old Gods came from all over, on the show, they are portrayed by people of various ethnicities. Bilquis, an ancient goddess of love, is played by Nigeria-born Yetide Badaki; and Cloris Leachman, of Czech descent, plays Slavic god Zorya.

In contrast, for the New Gods, the show has not only brought in white actors, but given them a more sophisticated look, that conveys the power they hold. The X-Files star Gillian Anderson dons the role of Media, and Bruce Langley plays Technical Boy.

“They have cast possibly the best ensemble cast I've ever seen on TV,” Whittle said, “in Ian McShane, Gillian Anderson, Emily Browning, the list goes on, it's incredible. To be a part of that, I feel very great.”

The contrast between the casting choices for Old and New Gods also conveys the balance of power and privilege in America today, although the show has been development longer than Trump’s new rhetoric, and Gaiman published his book in 2001.

Owing to this, some parts do need updating, which Fuller and Green are happy to recognise. Gaiman wrote about the powers of mass media when the Internet was still a fledgling service, and it’s embedded in mainstream culture now. Anderson’s Media taps into that well of cross-platform nuisance, and Langley’s Technical Boy isn’t a fat kid anymore, but rather a sinister Silicon Valley-type that we’d more associate with. Plus, he renders himself in virtual reality, instead of riding in a limousine. Welcome to 2017. 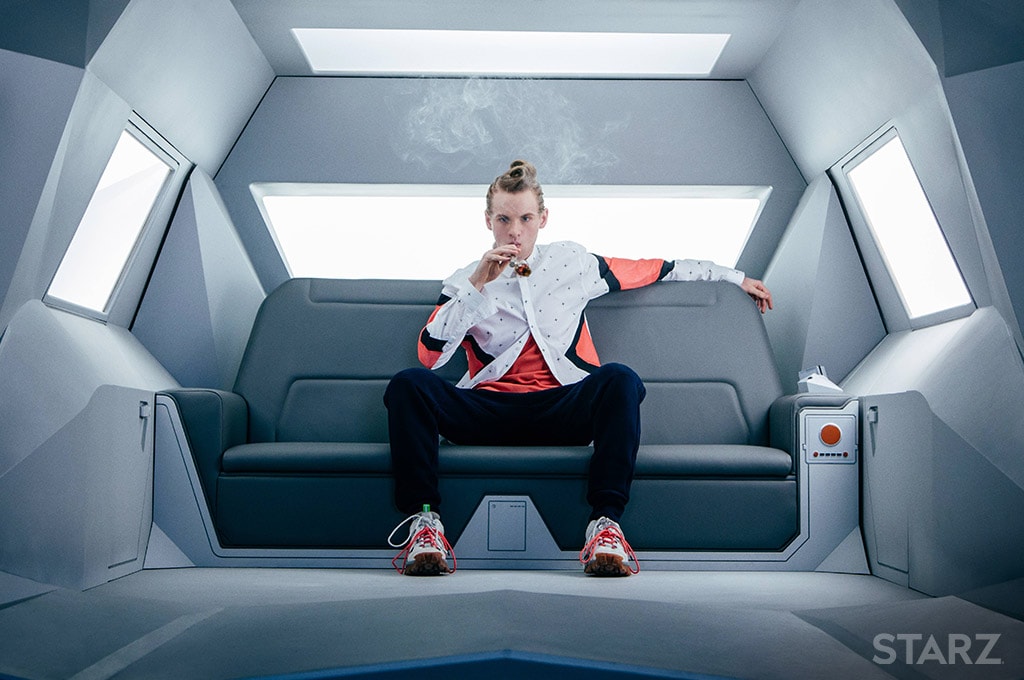 Technical Boy (Bruce Langley) in a still from American Gods

3) You'll have to pay attention

Shadow is an audience surrogate in Gaiman’s vision. As he’s thrust into a world where magic is real, we learn about each shock and surprise alongside him. Fuller and Green have retained that aspect of the book, and don’t slow down the narrative to explain and introduce the series to newcomers. The show opens with a man – identified as Mr. Ibis, who book fans will know a lot more about – writing down the history of people ‘coming to America’.

The segment follows the Vikings mentioned earlier, and the horrors they had to deal with in a new land. American Gods then cuts straight to Shadow bulking up in the prison courtyard, and follows him for the rest of the first episode. But the showrunners drill the mystery and intrigue even further. Where Shadow provides a peek into his thoughts on paper, there’s no continuous narration on the show.

Fuller and Green are hoping that the show is inquisitive enough for you to hang around and figure things out yourself, even more than Gaiman’s own work. That vagueness is on purpose, and if the answers are conveyed properly, you’re in for a treat.

Moreover, thankfully for book fans, the show does retain some of Gaiman’s best lines, like this one from Technical Boy: “Now, we have reprogrammed reality. Language is a virus, religion an operating system, and prayers are just so much fucking spam.” 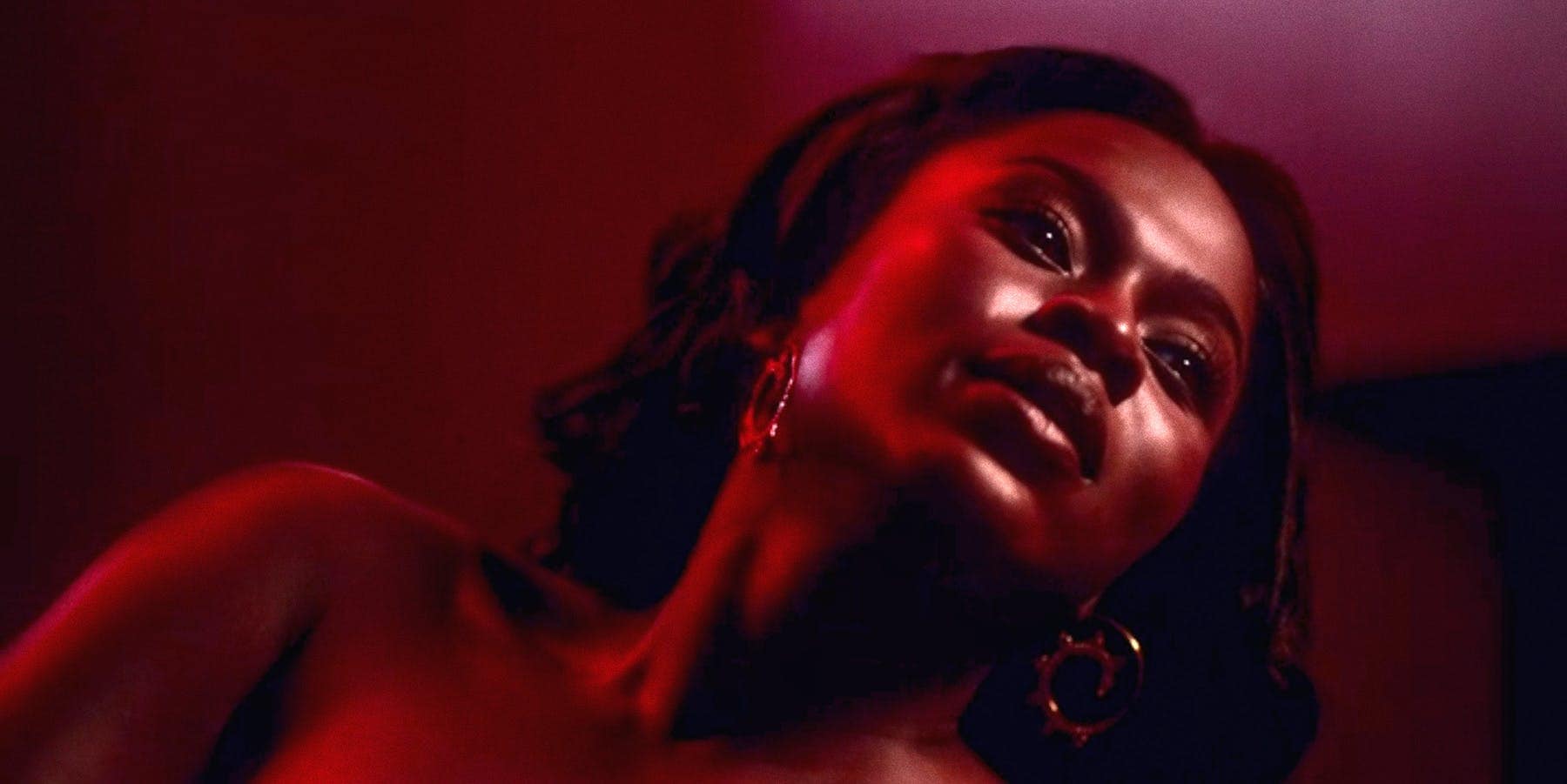 Bilquis (Yetide Badaki) in a still from American Gods

4) There’s no censorship in India

Alongside rivers of blood and copious amounts of violence, there’s dollops of sex too in American Gods, thanks to Bilquis’ presence in the pilot episode. We imagine book fans were understandably and rightly worried about Amazon’s troubled censorship dance in India, since it launched with the most cautious of stances – blurring even the slightest nipple glance – and ended up taking out an entire segment of The Grand Tour because it was scared about political backlash.

The company’s streaming division has slowly backtracked on that policy, releasing American Playboy: The Hugh Hefner Story without any censorship last month. Now, Amazon seems to be maintaining that stance for American Gods, so you can rest assured that the series seems to be untouched. That means you’ll be able to enjoy all the sex and gore that you can digest, without having to worry about distracting blurs, or parts being cut.

American Gods Is Out Now on Amazon Video. Here’s What You Should Know.
Comment