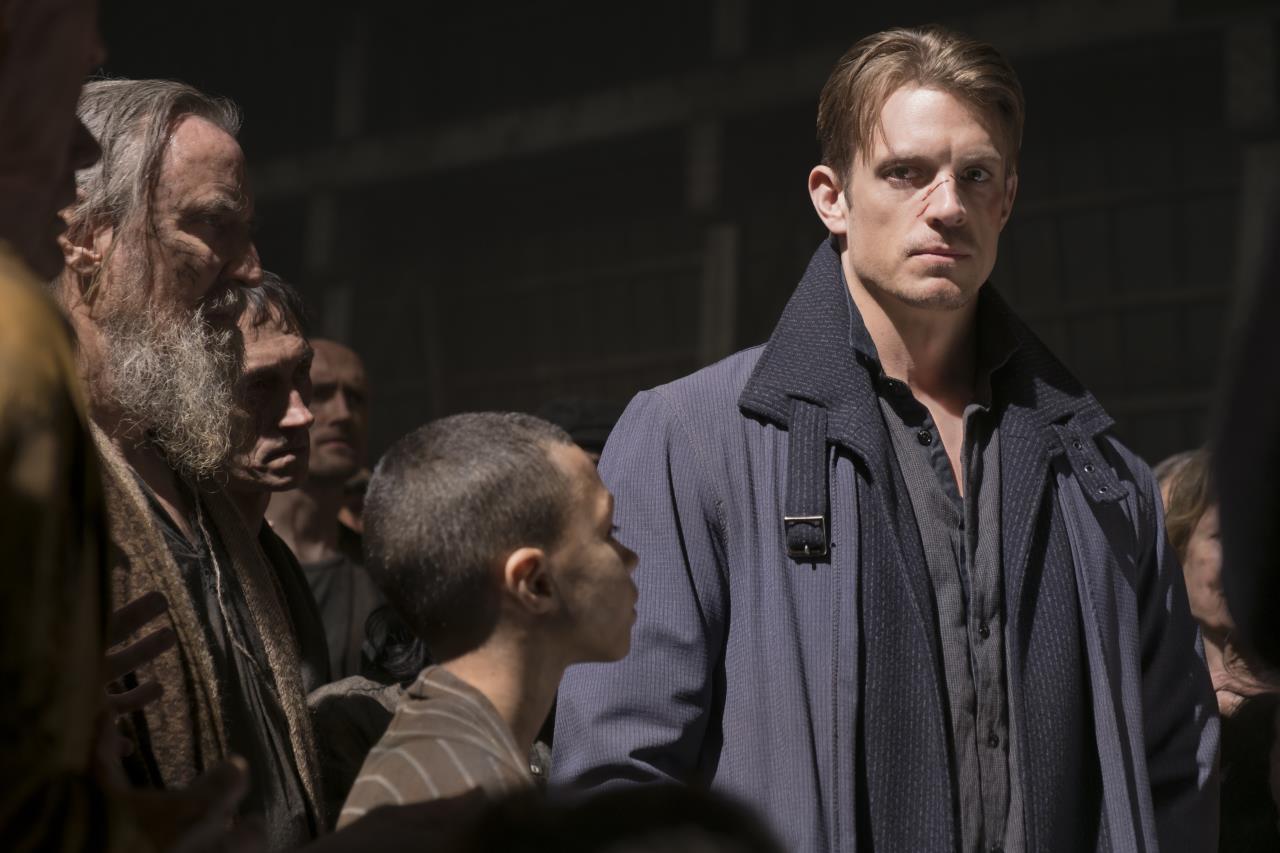 Joel Kinnaman as Takeshi Kovacs in a still from Altered Carbon

After starring roles in DC's super-villain caper Suicide Squad, and playing the eponymous character in the 2014 RoboCop reboot, Joel Kinnaman is set to lead Netflix's expensive new sci-fi series Altered Carbon. He plays Takeshi Kovacs, a former soldier of Japanese and Eastern European descent, who has been dead for 250 years. He's brought back to life thanks to the technologies that exist in the world of Altered Carbon, in a new body (called a "sleeve" in Altered Carbon), which is how Kinnaman – a white Swedish actor – plays a character of a different ethnicity.

That leads to some interesting subplots during the first season, one of them being involved with Kristin Ortega (Martha Higareda), a Bay Area cop who has history with Kinnaman's earlier self – or rather the "sleeve" that Kovacs is now wearing. While sitting down with members of the press in Seoul to promote his new Netflix project, Kinnaman brought it up.

"One of my favourite moments is the culmination of the love story with Ortega, when I'm jealous of my self," he said, with a laugh. "Like I'm jealous of the body I'm wearing. And we're in a triangle [love] drama, it's just that I'm being two parts of that triangle."

"When we were doing that in audition, it was the first time I realised the possibilities that the Altered Carbon universe gives us. It's all like, very basic human themes, but they just take a very futuristic turn because we're in different bodies, and this technology [puts] the same human themes in a completely different shape."

Owing to that love story, and coming-back-to-life scenes in early episodes, Kinnaman spent long periods on set wearing very little, he admitted. But it wasn't a problem for him, as he explained: "I'm Swedish, so we're pretty used to walking around naked. In the first three days of shooting, I had clothes on for one," he added with a chuckle.

"So I was like okay, well this is just how it is. It's funny, I was saying to someone -- I was going to talk to the crew on the first day of shooting, just say hello. And I was ten times more nervous about speaking in public than taking all my clothes off, and walking around naked," he said to laughs from everyone. "The weird thing is, speaking in front of everyone made me feel naked, but actually being naked was no problem."

Laeta Kalogridis, the creator and writer of Altered Carbon, who was alongside him, chimed in at this point: "I think he's downplaying a little bit, just because that was the first stuff we shot. [...] They were not sexual scenes. It was not exploitative, it was finding your way back into a physical body that you'd inhabited before and that the honesty of the performance, it required not being dressed. For me, it created on set so much respect for you what you were able to bring to it."

"I'll remember that for my next project, the first day I'll just take all my clothes off, and then I get respect," Kinnaman cheekily added.

Will Yun Lee as Takeshi Kovacs in a still from Altered Carbon
Photo Credit: Katie Yu/Netflix

On Altered Carbon, the Japanese-American Kovacs is played by two Asian actors – Byron Mann and Will Yun Lee – in flashbacks. Having more than one actor playing the same character isn't something that happens often. Kinnaman concurred, and said about his experience: "I was fortunate enough to go first. So they had to come to me."

"We had a lot of interesting discussions about it, and I think they were most curious about the physical aspects of how I played the character, if there were any mannerisms and sort of physical traits I was giving the character that they could pick up on," he explained. "The way I was holding my arms, Will incorporated that."

The first season of Netflix's Altered Carbon, with a total of 10 episodes, is out February 2.