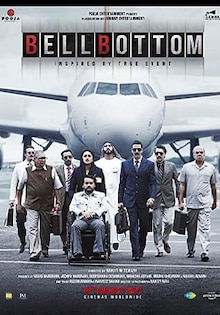 BellBottom is a spy thriller flick based on the true story of an undercover agent. The film is set in the early 80's Bombay and features Akshay Kumar and Vaani Kapoor in the lead roles. It has been directed by Ranjit Tiwari and has received several accolades for Lara Dutta's uncanny resemblance with the former Prime Minister of India, Indira Gandhi in the movie.

The story begins with a series of aeroplane hijacks in India over a period of five years. As the seventh plane is hijacked and landed in Amritsar, an undercover agent from Research and Analysis Wing (RAW) is appointed. The said agent, played by Akshay Kumar begins a daring converting operation of rescuing the 210 hostages from hijackers. BellBottom is inspired by real events in which Akshay Kumar plays a RAW agent in the espionage thriller. The movie also stars Lara Dutta, Vaani Kapoor and Huma Qureshi in pivotal roles. The audience is going aweee with Lara Dutta's look in which you can barely recognise her as former prime minister Indira Gandhi. This spy thriller is directed by Ranjit M Tewari. The film is inspired by real events. Set in the 1980s, this hijacking thriller revolves around true hijacking events that took place around seven times in the five years. As the trailer proceeds, you will get to know that due to the protocol Akshay Kumar's code name is "Bellbottom" and he will be the one who will helm the rescue operation. Akshay’s character appears daring and focussed when it comes to the accomplishment of the mission. He could neutralise four hijackers and rescue 210 hostages during the operation. In the movies, Vaani Kapoor plays the role of his wife while Huma Qureshi will be seen as Akshay’s team member. After the official teaser, now take a look at the official trailer of the BellBottom movie below.