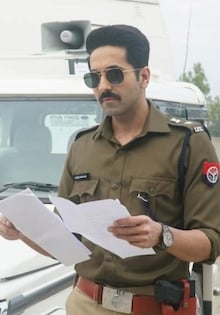 Article 15, hit the right chord which most of us agree to when it comes to casteism. In Mulk, Taapsee Pannu plays the role of a Hindu lawyer and fight for her Muslim father-in-law against the charges of terrorism.  Article 15 movie is based on the Indian constitution which prohibits discrimination on the basis of religion, caste, sex, place of birth and so on. In India, caste is something that defines your identity and not the name. Article 15 is perfectly rare movie that has come up with the social issue and confronted the horror of castism.

Ayushmann is a young cop who leads an investigative team for the case of rape and murder.
Ayan is a well-educated Brahmin young man who has the ability and courage to stand for the
normal people, like us. He is also caste blind. There is one sequence in the movie which
defines castism isn't it all, there are hierarchies even with the caste too and he explored at the absurdity of it. There are sequences when his fellow policeman pleads him to not to disturb the balance of the society.
Anubhav Sinha doesn't want to keep calm rather he wants to shatter the belief that caste still matters to many even in the era of the 21st century. Anubhav Sinha posses a real talent for staging drama and so the narrative is also gripping and keeps you glued. The writers Gaurav Solanki and Anubhav Sinha have brought their courage together of structuring the social cause as a police procedure.
Article 15 is a movie which shows us the real brutality that lies behind the cast. This movie makes you realize that the dark truth of castism lies not in the rural or backward areas of India, rather this belief lies beneath us. Watch this movie not create fuss but to bring a change in the country as responsible citizens.

Article 15 is a social crime drama that has deep-rooted casteism in India’s rural fabric at its core. The film draws inspiration from multiple real-life cases of caste-based oppression and crimes including the 2014 Badaun gang rape and the 2016 Unna flogging incident. The storyline begins with the transfer of Ayaan Ranjan (Ayushmann Khurrana) to Uttar Pradesh’s Laalgaon village as the Additional Superintendent of Police. Born and brought up to an upper caste family in the metropolitan city of Delhi, Ranjan is alien to the seriousness of caste discrimination in the Indian social fabric. It is only after the rape and murder of three teenage Dalit girls in Laalgaon and the reluctance of those in power to take the appropriate action, that he gets to experience the severity firsthand. As the storyline proceeds, numerous forms of Dalit oppression, heinous crimes against the downtrodden and an almost absent justice pops up in the form of narratives, case studies, and sub-plots. The film also throws light on the complex labyrinth of caste hierarchy even within the upper caste, with Brahmins at the prime focus. The rest of the plot revolves around Ranjan’s relentless efforts to get the three victims justice and trying to take a dig at casteism and caste-based oppression in the region. Article 15 served as the opening movie for the 10th edition of the London Indian Film Festival (2019) and also won three Filmfare Awards in Best Story, Critics Award for Best Actor and Critics Award for Best Film categories. 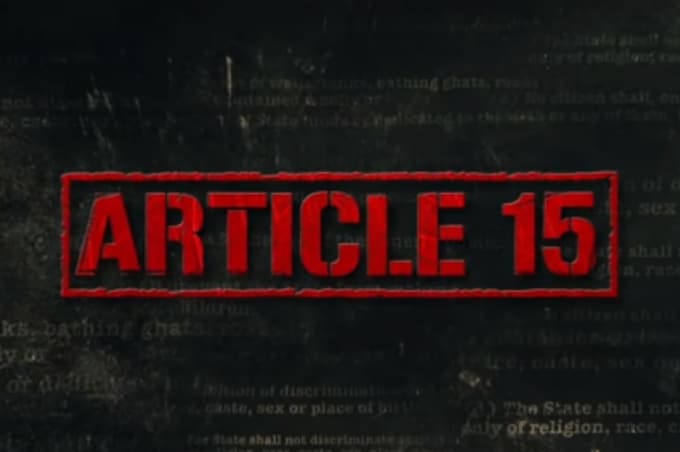 The teaser of the movie Article 15 is OUT and is surely throwing some very strong message which needs to be delivered. Gear up to watch the official trailer of Article 15 right away.

The songs of the Article 15 movie are composed by Anurag Saikia, Devin Parker, Piyush Shankar and Gingger. The lyrics are penned by Shakeel Azmi, Rashmi Virag, Slow Cheeta, Kaam Bhaari, Dee MC and Spit Fire. The song "Intezari" is quite a soulful track which will take to back to the times when original composition were more popular than the remix versions.