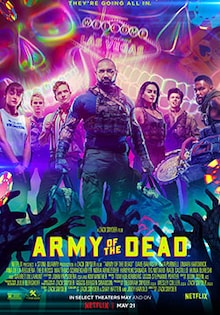 Army of the Dead

Once brimming with lights, the walled city of Las Vegas is left abandoned when zombies take over its glamour and grandeur. But all is not lost. A safe in a casino is still holding some odd $200 million. Billionaire casino magnate Bly Tanaka (Hiroyuki Sanada), to whom this sum belongs, is determined to step into the now quarantined city and retrieve the cash before a reckless government bombs it all. For this he hires Scott Ward (Dave Bautista) at a good $50 million, an offer that is huge enough for him to walk the dreaded roads. But, with only 96 hours in stock and a rather intelligent army of the dead to fight, the stakes are high and risky. Army of the Dead Review

Army of the Dead, Zack Snyder's new zombie heist thriller — out Friday, May 21 on Netflix — fails to deliver on every aspect of that description, except that it's unmistakably a Snyder film. Army of the Dead runs for about 138 minutes minus the credits (that's a lot), with Snyder once again showing that he's unable to trim his films down to size, on the back of a four-hour Justice League in March. Army of the Dead earns its 18+ rating with copious amounts of blood, gore and human entrails — Snyder loves a hard-R rating — but it's all gratuitous, and the movie is empty outside of it. And though there's neon oozing out of its posters, Army of the Dead is drab, dull and devoid of any fun. It's a Snyder trademark at this point, but it's still disappointing to see that he has no interest in changing his voice or visual style.

Army of the Dead Movie Trailer