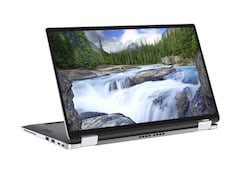 We don't review many laptops aimed at commercial buyers, but this particular one from Dell is a little special. We first saw the Latitude 7400 2-in-1 during CES this year, where it was billed as the world's first PC to use Intel's Context Sensing technology. What this means is that sensors in the display bezels can detect when you're away from the laptop or in front of it, in order for it to lock itself or wake up automatically. It's a cool trick, which worked well when we tried it at CES.

The Dell Latitude 7400 2-in-1 is billed as the world's first PC to use Intel's Context Sensing technology, where sensors in the display bezels can detect when you're away from the laptop or in front of it, in order for it to lock itself or wake up automatically. It also has an optional 4G SIM slot for LTE connectivity, and lots of enterprise-level features for security and remote management thanks to the vPro-enabled Intel CPU.

Most of the body and lid are made from machined aluminium, which feels very premium and well put-together. The 14-inch full-HD (1920x1080) display has a 16:9 aspect ratio and a maximum brightness of 300nits. It's also touch-enabled. The keys are a little smaller than usual, which took some getting used to, however, the travel is good and they aren't noisy even with vigorous typing.

Dell does sell a few predefined configurations of the Latitude 7400 2-in-1 as retail units on its website and one we tested, had Intel Core i7-8665U CPU, 16GB of LPDDR3 RAM, and a 256GB M.2 PCIe SSD. Boot times were quick thanks to the speedy SSD; the fingerprint sensor and face recognition worked very well; and Windows in general ran smoothly. Battery life is decent too, even on our Core i7 model, whihc ran for around 10-11 hours with the power mode set to ‘Better battery.'