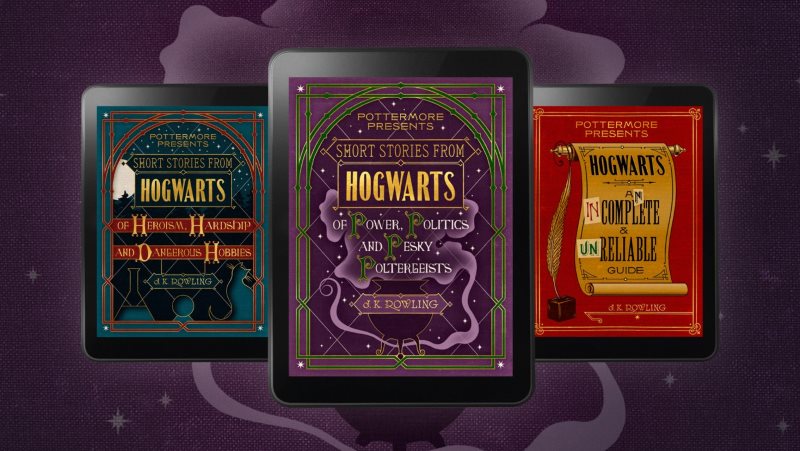 Just weeks after the release of the eighth story in the Harry Potter universe, author J.K. Rowling has announced that she will be releasing three new ebooks in the new "Pottermore Presents" ebook series, on September 6. The series will contain collections of short stories that "delve even deeper" into the famous franchise, and will contain "titbits taken from Pottermore's archives and original writing from J.K. Rowling".

The first three "bite-sized ebooks" or "ebook shorts" in the Pottermore Presents series are titled Short Stories from Hogwarts of Power, Politics and Pesky Poltergeists; Short Stories from Hogwarts of Heroism, Hardship and Dangerous Hobbies; and Hogwarts: An Incomplete and Unreliable Guide. Cover arts for all three have been designed by Miraphora Mina and Eduardo Lima - otherwise known as MinaLima - who have also worked on graphic design for the Harry Potter films.

Hogwarts: An Incomplete and Unreliable Guide will tell you more about the ghosts that roam around the school, and unravel the mystery of when the Sorting Hat can't pinpoint a house for an incoming first-year student.

(Also see: Harry Potter and the Cursed Child Is Devoid of the Rowling Magic)

Pesky Poltergeists will contain original writing by J.K. Rowling in the form of a story about Horace Slughorn's early days as Potions master at the school and how he came to meet with young Voldemort, aka Tom Marvolo Riddle. It will also feature pieces about Ministry of Magic and the prison for wizards and witches, Azkaban.

Dangerous Hobbies will add depth to the Hogwarts stuff you've known throughout the seven original books. An original piece will focus on the beloved Minerva McGonagall, whom readers of the Cursed Child already see in a different light. There will also be a featurette on Care of Magical Creatures professor Silvanus Kettleburn.

In addition to all that, the books will also reveal the "ruthless roots" of Dolores Umbridge, and detail how a witch or wizard becomes a portrait.

The three new e-books will be available in three weeks' time on September 6 in English, French, German, Italian, Japanese, Dutch, Brazilian Portuguese, and Spanish. All three are indeed bite-sized, with Pesky Poltergeists coming in at 63 pages, Dangerous Hobbies at 68 and the Incomplete and Unreliable Guide of Hogwarts at 79. Each ebook will cost $3 (Rs. 200) and all are up for pre-order from Amazon, Barnes and Noble, iBooks, and Kobo Books.