Running is one of the most economical sporting activities in the world, in that it requires nothing but your body and the desire to run. Barefoot running, however, is not for everyone. So the first thing most runners want is a pair of shoes and once you go down that rabbit hole, you will quickly realise that finding an affordable pair of shoes for long-distance running is not as easy as it sounds.

An Indian startup, Shapecrunch, that wants to change that, by taking the focus away from shoes and moving it to what's inside the shoe — the insole. This is the layer of padding inside the shoe, on which your foot rests. Shapecrunch makes 3D printed custom orthotics, which means custom-made insoles, and it believes that these are far more effective at managing pain and preventing injuries than expensive shoes.

“This whole industry is not made by doctors it is made by marketers… When high heels were made the doctors should have come forward and said that this is not something that is going right. It's marketing ,right, you can do anything and sell anything. That is something which we are not into,” Nitin Gandhi, co-founder of Shapecrunch, tells Gadgets 360 during the course of a meeting at Heal Institute, a sports injury prevention clinic in Mumbai's suburb of Khar. “We haven't entered into that cool quotient. We are selling it mainly for people who are looking for a functional thing and very good quality that too by professionals and doctors. We sell it as a medical device.”

Gandhi says it's better to invest in an affordable pair of running shoes and get a pair of Shapecrunch's custom made shoe insoles than to spend Rs. 10,000 and above on running shoes, though he obviously has a vested interest in saying that. He illustrates this point by showing us the insole of a shoe worth over Rs. 13,000 from a popular brand. Shapecrunch's insoles were thicker, and had much more pronounced supports, and the back portion was sloping downwards from left to right. This, Gandhi says, is customised for the needs of a person's foot as opposed to mass produced shoe insoles. 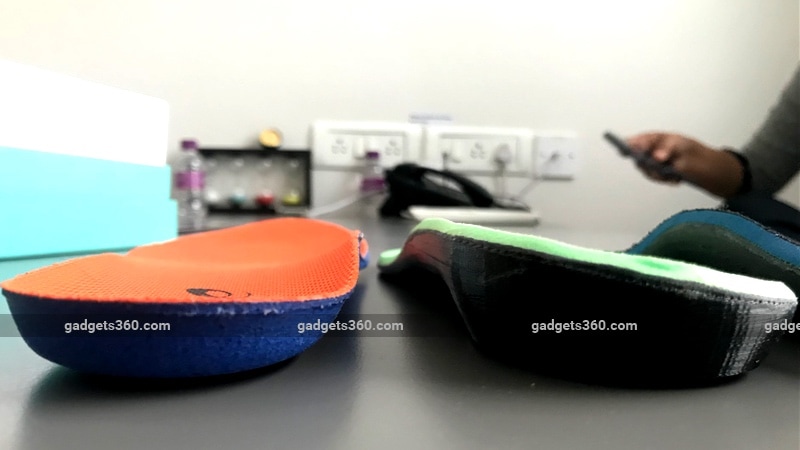 On the face of it, Shapecrunch takes the medical part of making orthotics very seriously. The startup has teamed up with several doctors to be its medical advisors, and sells its insoles through physiotherapy clinics only.

“(Other companies) used to use vacuum pad or POP cast where they would take an impression to make a mould. It was a very manual thing. It was a 30-45 minute process. If you get this done from three different people the results can be very different,” Gandhi says adding that Shapecrunch has zeroed in on just three images of the foot to make custom orthotics.

“One is the plantar image. It is mapped with the sides of the shoe,” he continues. “The second image is of the side. We check how much arch is required. Also the starting point, ending point, everything. Then we have the back image from where we see how much deviation is there (in the heel). We have decided on some limits for arch, etc.” The company also provides a foot measuring device to physiotherapists to get the exact shoe size and foot width measured.

The physiotherapists will then ask you several questions about injuries and pain, and fill up a sheet with all the details. “Insoles normally you can wear anything. A medical device it has to come from professionals. The people who know what is the problem in the foot and how to correct it,” says Gandhi.

“They have to upload the pain areas and how much is the intensity of pain” he adds. “Then you also mention the same thing in the other foot. Foot pain can actually go to your knee. We ask all those things in that prescription and doctors upload the picture on the app.” 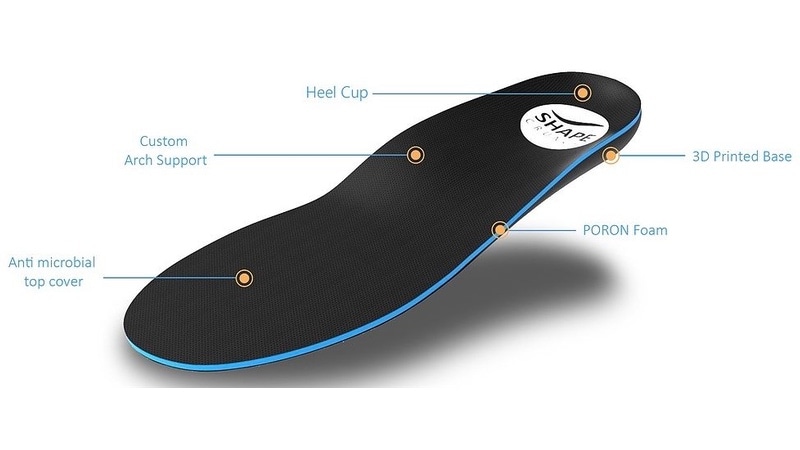 This sheet and the photos are then sent to Shapecrunch via an app, and the company gets to work to design your shoe insole. Its team checks all data and follows up with the physiotherapist if there's anything missing. If all is good, your insole is sent for 3D printing, and is ready within four hours. After that, it's shipped to you.

There are two variants of inserts, one for formal shoes and one for sports shoes. Shapecrunch offers a six-month warranty and recommends that you buy a new insert when you replace your shoes.

Shapecrunch's products are available globally and it has offices in India, USA, and Singapore. In India a pair of shoe insoles cost Rs. 3,500 and the pricing for this is upwards of $200 (roughly Rs. 14,000) in other markets. Gandhi says this disparity is because the market is very nascent in India and that similar products abroad cost well over $500 (roughly Rs. 28,000).

“The price difference is very simple. Over there this industry, orthotics, goes upwards of $500. Yesterday I met a guy (from the US) who said ‘it's only this much ($200)?',” says Gandhi.

He adds that in the US it's all about saving time. He recounts the time when he met an orthotist at UCSF (The University of California, San Francisco), who told Gandhi that it takes him around two hours to make a pair of shoe insoles. “He said in that time I can see a patient but moulding everything is not something I want to do,” Gandhi recalls.

Shapecrunch's technology saves physiotherapists the cost of getting machines to get the measurements and time because the startup takes care of making the orthotics.

Further reading: Running, Shapecrunch
Pranay Parab Email Pranay Pranay is in charge of podcasts and videos at Gadgets 360. Over the years, he has written over 500 tutorials on iPhone, Android, Windows, and Mac. He has also written in-depth reported features on the intersection of technology and culture, reviewed fitness wearables, been the social media manager, started two podcasts, and produced several tech videos. He loves travelling, particularly to places not frequented by tourists. He keeps running half-marathons across the country and hopes to complete ...More
Samsung Galaxy S10+ Leaked Case Tips Design Similar to Galaxy S9+
Waymo’s Self-Driving Cars Being Vandalised in US: Report