Six Science Fiction Books to Keep You Entertained in September 2017

If you are into reading science fiction, September 2017 is shaping up to be an exciting month. In August, we had listed five great books that were coming out, and this month, there are six new releases that sound really fun. With big book releases from venerable SF authors such as Robert Silverberg, apart from exciting new authors, you’re bound to have more than enough to read to get through the month. Here are the most promising science fiction books you can read in September 2017.

The Ruin of Angels by Max Gladstone
The Ruin of Angels is the sixth book in the Hugo-nominated series called Craft Sequence. This series isn’t exactly science fiction, as it falls more under the urban fantasy genre, but it’s quite exciting to read nonetheless. Imagine a world where the battles of gods destroy entire towns, and some humans are tasked with resurrecting dead gods to prevent chaos from setting in, and you get a bit of the picture here.

The Ruin of Angels’ storyline begins 150 years after The God Wars destroyed the city of Alikand. A new city has risen in its place and a priestess, who’s also an investment banker, called Kai Pohala arrives in town. Kai finds her sister in trouble and soon gets entangled in something much bigger than saving her — trying to keep some people from finishing off what’s left of Alikand.

Sleeping Beauties by Stephen King and Owen King
Renowned author Stephen King needs absolutely no introduction, especially since a movie based on his Dark Tower series just hit theatres. King and his son Owen have collaborated to write a book called Sleeping Beauties, which has nothing to do with classic fairy tales.

Provenance by Ann Leckie
Ann Leckie arrived on the science fiction scene with a massive hit in the form of the Imperial Radch trilogy comprising excellent books such as Ancillary Justice. The series has won her multiple awards such as the Hugo, Nebula, Arthur C. Clarke, and Locus. Leckie is back with a new novel called Provenance.

Provenance is the story of a young woman who craves power, and has one chance to secure the status she wants so badly. If she can regain priceless lost artefacts, she can gain all that she wants. However, these artefacts have been stolen and the thief is languishing on a prison planet from which no one has ever returned. Things soon escalate as an interstellar conflict breaks out and the protagonist must battle against time to save her future, her family, and her world. 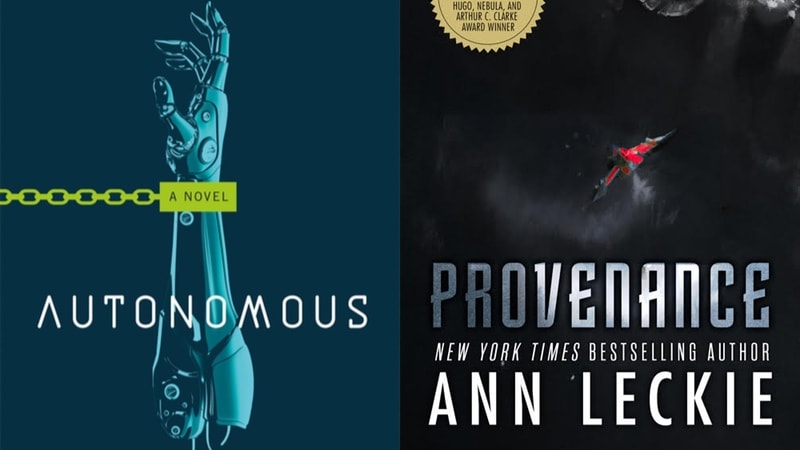 Autonomous by Annalee Newitz
Annalee Newitz is a journalist who founded the science fiction blog called io9. Newitz has written a few books since then, including one that speculates on how humankind will survive an extinction-level event. Autonomous is a science fiction novel by her, which is set on Earth in the year 2144.

The protagonist Jack is an anti-patent scientist turned drug pirate, who tries to be a pharmaceutical Robin Hood. She makes cheap medicines for people who can’t afford them. Her latest hack has gone wrong as it makes people addicted to their work, doing repetitive tasks until they go crazy. A military agent and a robot are hot on Jack’s trail, which leads to a whole lot of unexpected events.

Null States by Malka Older
Malka Older also arrived on the SF scene with a bang as her novel Infomocracy, part of the Centenal Cycle, received high critical acclaim. The series combines politics with science fiction and makes for an exciting read. Now, book two in the Centenal Cycle is about to be released. It is called Null States.

The Emperor and the Maula by Robert Silverberg
Robert Silverberg is a venerable science fiction author who has written masterpieces such as Dying Inside, and Up the Line, among many other acclaimed books. He’s releasing a new novella called The Emperor and the Maula. This was born in 1992 as part of an aborted publishing project and it’s finally being printed in full.

The Emperor and the Maula is the story of a story. A woman called Laylah Walis — denizen of a far-future Earth that has been conquered by an advanced starfaring species — has one last chance to stall her execution. She goes to the galactic emperor and tells the story of the beleaguered people of Earth who’re struggling futilely to restore their lost independence.

Which science fiction books are you looking forward to reading in September 2017? Let us know via the comments.