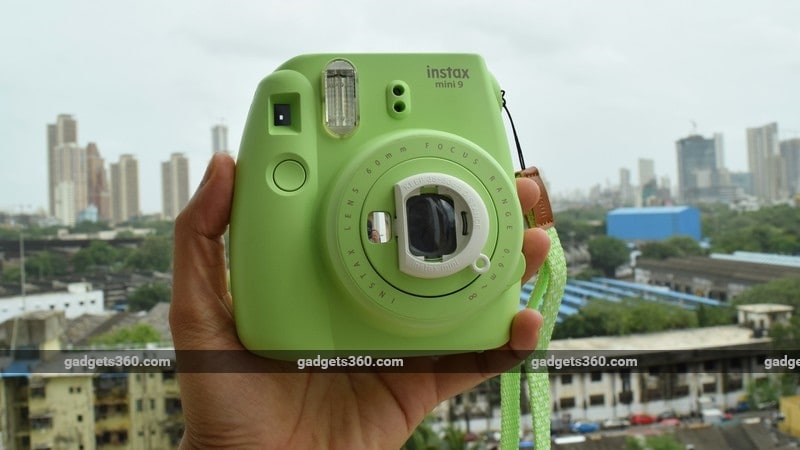 Instant film cameras are fun little toys to have around. They’re easy to use and you get a printed photo on the spot with that iconic retro look that we try to recreate in our social apps. However, this trend hasn’t really caught on in India despite Fujifilm's range of instant cameras being available here for a while now.

The company hopes to turn things around with its latest model, called the Instax Mini 9. It has an improved design, and what better way to target millennials and the teenagers of today than with the addition of a selfie mirror? Let’s put it to the test to see how good it really is.

For Rs. 5,999, you get the Instax Mini 9 camera, a matching strap, a set of batteries, and a close-up lens attachment. You’ll have to buy the instant film separately. It retails for about Rs. 1,020 for a pack of two cartridges, with 10 film sheets in each cartridge. The new camera is available in funky pastel shades, and what we have the Lime Green one with us today.

The Fujifilm Instax Mini 9 is built entirely of plastic, but the fit and finish is good with no crude edges or misaligned joints. Around the back, we have a little compartment for the film cartridge, an optical viewfinder, and a counter which shows you the number of unused film sheets remaining. The batteries slot in on the side, and there's a loop for the wrist strap on either side of the camera.

The slot from where the processed film is ejected is on the top. In the front, we have the flash and light metering sensors which automatically adjust the exposure. There’s a shutter button here and a power button beside the lens. The ring around the lens can be used to switch between different exposure modes, but the only one you can actually force the camera to use is Hi-Key, which sets the flash to go off at its maximum intensity for low-light situations. The rest of the time, the camera will automatically determine the best exposure and switch to it, which is indicated by the different LEDs around the dial lighting up.

The Instax Mini 9's instant film sheets give you 62 x 46cm photos. The way this works is that each film sheet contains chemicals in little pouch at the bottom, and when it is exposed to light, the chemicals are pushed into the frame with the help of rollers, as it is ejected from the camera. The film pops out only a few seconds after you press the shutter button, but it then takes about two minutes for it to develop fully. Just like with traditional Polaroids, you can personalise the white frames with messages, drawings, etc.

The camera features a two-element lens with a fixed shutter speed of 1/60th of a second. The aperture varies depending on which exposure mode is selected, and can range from f/12.7 to f/32. The flash always fires, no matter the light conditions. The close-up lens clips onto the front of the main lens and lets you shoot objects as close as a foot away from the lens. There’s really isn't much to this camera other than turning it on and shooting.

Since this isn’t a digital camera, there are no files to display for quality to be judged by. The final output is printed onto the film sheets, and that's that. The credit-card sized photographs make for fun mementos, but the output quality isn’t always predictable.

The camera is comfortable to hold and light enough for one-handed use. Since the viewfinder is placed to the left of the body and you don't see through the lens, the position of your subject will always be offset a little unless you know exactly how to compensate. It's best to leave some space around your subjects in order to avoid cutting them off. With each new cartridge, the first tune you press the shutter button, the protective sheet will be ejected, after which actual film sheets will be used.

We found many overexposed areas in outdoor shots taken in daylight, resulting in washed-out details. The Instax Mini film that we used has an ISO 800 rating so it’s up to the camera's light sensor to adjust the aperture, but even at the narrowest setting, it’s tough to get a detailed shot in sunlight. Things are better indoors when lighting is more controlled. In a well-lit room, we managed to get fairly detailed close-ups with the attached lens. Colours weren't too bad, although all pictures have that slightly hazy look, which some would call "retro". It's also important to note that the Instax Mini 9 works best for close-ups and doesn't fare too well with subjects at a distance.

Just like the overexposure issue when shooting in bright daylight, some of the shots we took indoors had a soft focus. In low light, it’s best to use the Hi-Key mode as it results in a well-lit picture, eliminating most shadows around your subject. However, it isn't suitable for close-ups as the bright flash will overexpose your subject. You have to learn the balance, but that means you wind up wasting quite a lot of film sheets, which are not exactly cheap.

A pack of 20 film sheets costs around Rs. 1,000. which translates to about Rs. 50 per photo. If you want slightly better value, you can pick up packs of 100 sheets which retail for a little under Rs. 4,000, which works out to roughly Rs. 40 per photograph. Do remember that these films have an expiry date.

The company says that each set of two AA batteries should last for about 100 shots, but this will vary depending on which exposure modes you end up using more often.

The Fujifilm Instax Mini 9 is a functional upgrade over the Mini 8, with its useful close-up lens and selfie mirror that a lot of people will relate to. Rs. 5,999 isn’t too much for a camera that spits out printed photographs nearly instantly. It's a reminder of a simpler time when we didn't have the luxury of taking hundreds of shots in one go, since every one has to count. The Mini 9 is a camera you break out for parties or other social gatherings where these instant photos make for fun and personal, mementos of the good times. Plus, the ability to have these physical photographs in your wallet with you has its appeal.

Using it on a daily basis won't be very economical, as we're looking at a cost of at least Rs. 40 per photo, and that is if you opt for the value pack of film sheets. Also, details, clarity and exposure in photos are always a bit hit-or-miss. This comes with the territory of instant cameras, so if you like the idea of photos having varied Instagram-like filters to them, then you'll be happy with it.