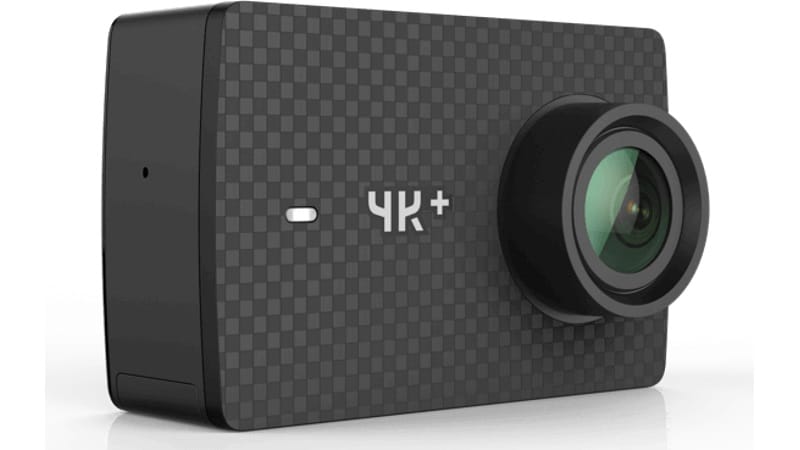 Yi Technology, a company that counts Xiaomi as one of its early investors, has launched its Yi 4K+ action camera, which is claimed by the company to be the first in camera market to capture 4K videos at 60 fps. The company announced well ahead of CES 2017 that it will be launching the action camera, a direct competitor to GoPro, at the trade show.

Interestingly, most of the other competitors in the market are currently capable of shooting 4K videos at 30fps, i.e. half the frame rate offered by Yi 4K+. The newly-launched action camera features a 2.19-inch "retina" touchscreen display and comes with a 1400mAh battery. The Yi 4K+ action camera is powered by a capable Ambarella H2 chipset coupled with 2GB of RAM. It packs a quad-core ARM Cortex-A53 processor and comes with a Sony IMX377 12-megapixel image sensor.

It offers support for voice-commands and as per company's claims, the improved outdoor audio quality allows users to control the camera hands-free. Other features on the camera include electronic image stabilisation (EIS), live streaming, and support for virtual reality. In terms of connectivity, it offers a USB Type-C port, Bluetooth 4.0 low energy, G-Sensor and a USB 3.0 port as well.

All of the Yi 4K accessories, including waterproof housing and handheld gimbal, are compatible with Yi 4K+ as well, the company said on the product page. The company has not revealed the pricing of the camera but considering that the Yi 4K is priced at $250 (roughly Rs. 17,100), it can be expected to be priced above $300 (roughly Rs. 20,500).

The company also showcased its Yi Erida drone at CES, as expected earlier, but is expected to launch the device at a later date for the US. The drone is expected to be made available in the second quarter of 2017 and is tipped to be priced around $749 (roughly Rs. 51,100) to $999 (roughly Rs. 68,100), as per a report by Tom's Guide.

Sherlock Rediscovers Its Edge, While Retaining All Its Troubles
Nokia Android Phones Tipped to Get a Personal Assistant Named 'Viki': Report