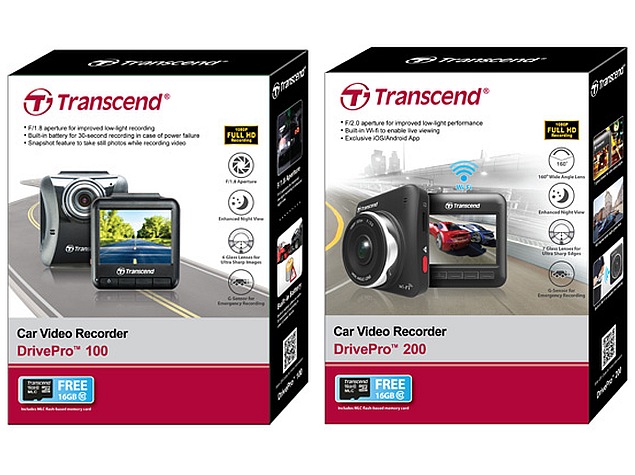 Transcend has launched two car video recorders, dashboard cameras or dashcams, in India. The DrivePro 100 and DrivePro 200 have been priced at Rs. 8,999 and Rs. 9,899 respectively. The cameras are already available via Amazon and Snapdeal.

The Taiwanese manufacturer, best known for its storage offerings, says the dashcams are a "safety solution on the road". Transcend cites changing lifestyles and increasing traffic levels resulting in more road accidents.

The Transcend DrivePro 100 dashcam is the standard model with a large f/1.8 aperture and a six-glass 130-degree wide angle lens. It features a 3-megapixel CMOS sensor with low-light sensitivity, and comes with a built-in speaker and microphone. The DrivePro 100 features a 2.4-inch LCD display with an unspecified resolution.

The DrivePro 200 on the other hand features an f/2.0 aperture and a seven-glass (and one infrared filter) 160-degree wide angle lens, and Wi-Fi connectivity for controlling the camera and also for easier syncing of recorded videos with mobile devices. It also features a 3-megapixel CMOS sensor with low-light sensitivity, apart from a built-in speaker and microphone, and a 2.4-inch LCD display with an unspecified resolution.

Transcend says both the DrivePro 100 and DrivePro 200 car video recorders are capable of recording at full-HD resolution at 30fps. The firm is touting automatic adjustment to different lighting conditions to ensure all details are captured. Both also feature 3-axis G-sensors for emergency recording activation on impact.

A free DrivePro PC Tool for Windows can be downloaded to play recorded videos. Android and iOS apps are available for the DrivePro 200, allowing users to watch live footage while recording, to play back and download videos, and to adjust camera settings.

Powered via the car adapter for the cigarette lighter socket, both dashboard cameras also sport built-in Li-polymer batteries, so that if the car loses power they can still record important information for up to 30 seconds. Alternatively, the cameras can be manually activated to record up to 30 minutes without a power supply. Both cameras come with a 16GB microSDHC card bundled. Both cameras also feature an adhesive mount in the box, but a suction mount can also be purchased separately.