Share on Facebook Tweet Snapchat Share Reddit Email Comment
Sony has launched the Alpha 7 and 7R mirrorless interchangeable lens cameras (MILCs) in India, priced at Rs. 94,990 and Rs. 124,990 respectively. They will be available in the Indian market by the end of December. According to Sony, the two cameras are the world's first 35mm full-frame sensor MILCs with autofocus.

The Sony Alpha 7 (seen above) features a 24.3 effective megapixels Exmor CMOS sensor, and the Alpha 7R features a 36.4 effective megapixels Exmor CMOS sensor. Both cameras have been given front and back dials, nine customisable buttons and 46 assignable functions, plus a control wheel and exposure compensation dial for allowing what the company calls 'intuitive adjustments.' Users can utilize either the high-contrast, high resolution XGA OLED Tru-Finder, or the tiltable 3.0-type LCD screen to frame their shots.

Both the Alpha 7 and 7R feature the new BIONZ X processor, which allow them to shoot Full HD video 1080p video, at a selectable 50p (AVCHD progressive) or cinematic 25p frame rates. Also onboard is Clear Image Zoom for enhanced video recording, audio recording level control and display, and a 'clean' HDMI output.

Sony says both the Alpha 7 and 7R (seen below) showcase the company's new Fast Intelligent AF. The Alpha 7 in addition features Fast Hybrid AF (combining Fast Intelligent AF with phase detection autofocus), which boosts AF tracking and makes ideal for sharp focus during continuous shooting at up to 5 frames per second. 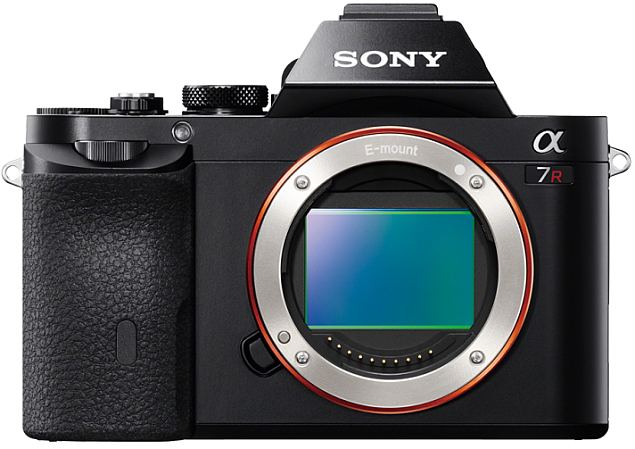 Once again, like the recently launched Sony Cyber-shot DSC-RX10, the Sony Alpha 7 and 7R feature Wi-Fi and NFC connectivity, and is compatible with Android and iOS phones (apart from being fully controllable via the PlayMemories Camera app).

Apart from the difference in sensor and autofocus, the Alpha 7 and 7R are different in construction. The Alpha 7 is meant more for advanced amateurs, and features a rigid metal frame, apart from a magnesium alloy top-cover, giving it a total weight of 416 grams (body only).

The Alpha 7R on the other hand is meant for professionals, and features a tougher magnesium alloy body that is both dust and moisture-resistant, and weighs just 407 grams (body only). This according to Sony makes it world's smallest, lightest interchangeable lens camera with a full-frame sensor.

There's also a new-generation mount adaptors (LA-EA4 and LA-E3) that allows photographers to use full-frame A-mount optics, including the new SAL70200G2 70-200mm F2.8 G SSM II telephoto zoom. Pricing of the lenses and adaptor can be found in the table below. 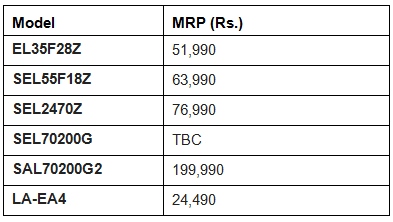