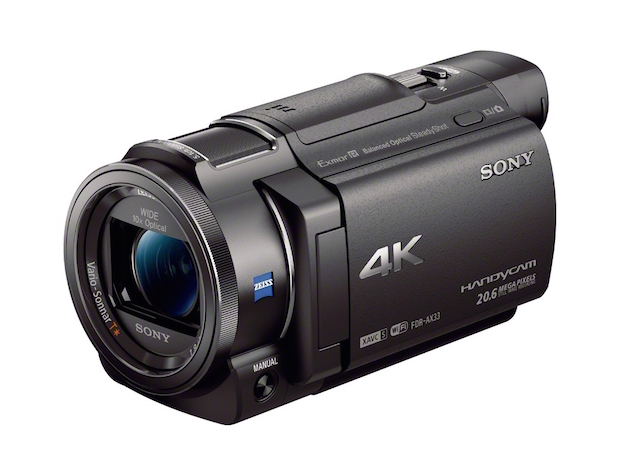 At the ongoing CES 2015 expo in Las Vegas, Sony pulled the wraps off the FDR-AX33, which the company claims is its 'most compact 4K Handycam camcorder to date'. It undercuts the size and weight of last years FDR-AX100 4K camcorder by 30 percent and 20 percent, respectively. It will be available from February for a price of $999 (approximately Rs. 63,200)

Sony is introducing its Balanced Optical SteadyShot (B.O.SS) image stabilization technology in its new camera which reduces the blur while recording 4K video. The camcorder has the ability to record 4K video in XAVC S format with a high bit rate of 100Mbps (requires SDXC UHS-I U3 or higher capacity card). The manual ring and manual button are customisable to suit the needs of the videographer. It has a 3.0-inch LCD, which Sony calls 'Xtra Fine LCD WhiteMagic'. Sony also claims that the electronic viewfinder has approximately three times the resolution of its previous models. Users can extract up to 8.3-megapixel resolution of still image from the captured 4K footage.

"As the popularity of 4K continues to skyrocket, consumers are constantly searching for new and different ways to enjoy the platform," said Patrick Huang, Director of the camcorder business, Sony Electronics. "Our new AX33 Handycam brings the wonders of 4K personal content creation to a wider audience than ever before, delivering crystal clear 4K video from the palm of your hand. It's the ultimate choice for families looking to capture and preserve all their precious memories in the highest possible quality."

The 3Doodler Is Back on Kickstarter With a New and Improved Model
Xolo Q700 Club With Dual Front Speakers Now Available at Rs. 6,899